A general rule of thumb is that any given country in Europe will require up to 500MHz of new spectrum bandwidth in the next ten years. Many ways are being advocated to achieve this: spectrum transfers, spectrum commons and spectrum pooling.

In addition to those measures, the subject of dynamic spectrum access (DSA) – the allocation of spectrum as needed – is being discussed by operators, regulators and others in the wireless industry. There are various techniques being considered to achieve this (see Figure 1), and various benefits that can be realised, as well as a number of implementation challenges to overcome. 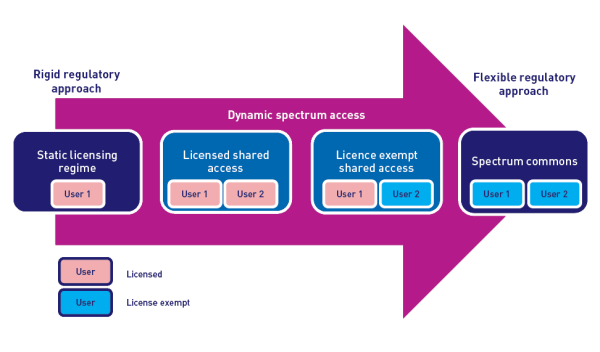 The term DSA has come to encompass a number of different approaches and techniques that aim to increase the utilisation of the radio frequency spectrum. At its most ambitious, it is hypothesised that cognitive and software-defined radios could intelligently choose when to transmit, so as to avoid other radio transmissions and also to avoid causing undue interference to fellow frequency users. Short-term propositions include near-real-time spectrum assignment in certain bands and greater use of long-term secondary spectrum leasing to authorised spectrum partners.

DSA is therefore all about making better use of radio spectrum through re-use of 'idle' bandwidth, being either frequencies that are not used in all locations, in which other systems could be deployed, or frequencies that are only used intermittently, and which could therefore be re-used outside these times. These 'gaps' in utilisation, which provide opportunities for DSA, arise for a number of reasons.

One of the overarching drivers for DSA is to help overcome spectrum shortages – particularly noting that under-utilised bands may exist across a relatively wide range of the spectrum. Even in the economies where wireless communications have developed the most and usage restrictions have been removed, thus making spectrum use as flexible as possible, spectrum under-utilisation is still considered to be widespread.

Nevertheless, developments to share spectrum in a dynamic manner have been slow to be implemented. Shared use of the UHF band, or UHF white space, is the first major foray into a new spectrum management model, but even this is in its infancy, with a very limited number of commercially operated networks, and no commercial networks so far in Europe despite a number of trials. Lack of more dynamic developments in this area is partly a result of the need for technological developments to occur. However, various DSA schemes can be implemented relatively quickly when regulators and incumbent spectrum users begin to evolve their attitude to how spectrum can be used and shared.

Various Analysys Mason Research reports on DSA, and the full version of this article, can be accessed by subscribing to our Spectrum research programme.