The Internet is not the Titanic: investment and innovation can sustain growth

Comment by Michael Kende, Partner at Analysys Mason and Markus Kummer, Vice President of Public Policy at the Internet Society.

Warnings about inevitable collisions are almost as old as the commercial Internet itself. The traffic spike in 1995 following the release of the first web browsers led Bob Metcalfe, the co-inventor of Ethernet, to write a column in which he predicted that the Internet would suffer a 'catastrophic collapse' – and he promised to eat his words if it did not. Soon afterwards at a conference he dropped his column into a blender and literally ate his words. Since then, others have made similar false predictions of doom – it seems that the only lesson they learned was not to offer to eat their words when they were proved wrong.

The Internet is much more nimble than the Titanic, continuously routing around challenges encountered en route. In the mid-1990s, Internet usage was largely in developed countries, access was via fixed dial-up, and early Web content was text-based. Since then, worldwide Internet access and usage have increased exponentially. Dial-up has been replaced by broadband, and mobile broadband speeds now approach those of fixed broadband. More than 25% of international calls are now made over the Internet, while the International Olympic Committee offered free live streaming of the recent London Olympic Games to users in 64 developing countries via YouTube.

Each spike in demand has been met with innovation and investment. Innovative new technologies have increased the capacity of infrastructure by many orders of magnitude, while waves of investment have emerged to upgrade existing infrastructure and deploy new networks. Figure 1 shows total telecoms investment in OECD countries by region, highlighting the boom that followed the introduction of web browsers in the late 1990s, and a second wave responding to the increase in Internet video availability that peaked in 2007. Furthermore, up to 98% of Internet traffic can now be stored in multiple caches and housed in Internet exchange points (IXPs) close to users, thereby reducing capacity demand. This same response repeats itself continuously as new infrastructure is built in developing countries to deliver new content and services to users. 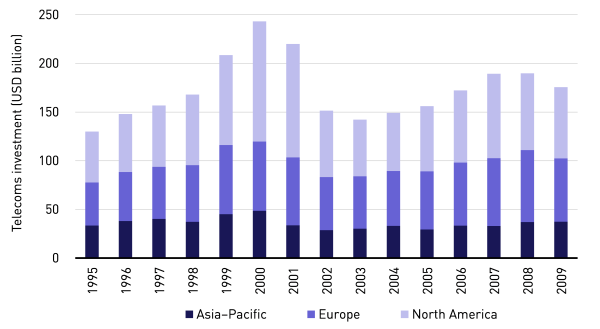 The Internet Society has just released a report written by Analysys Mason, entitled How the Internet continues to sustain growth and innovation, which provides data and analysis of the continual investment and innovation that have sustained the Internet through growth in developed and, more recently, developing countries.

We recognise that developing countries have legitimate concerns about the digital divide. There are still roadblocks to the expansion of mobile Internet access, particularly in sparsely populated areas with low income users. These challenges require hard policy and regulatory decisions – introducing competition, supporting regulatory independence and transparency, for example – but also finding local solutions that can be tailored to the unique situation of a country or region. However, there is no indication that the Internet and its growth are unsustainable in developing regions. These real challenges should be addressed as developmental challenges and include the donor community. They should not be tackled through any one-sized global regulatory intervention that would change the very nature of the Internet.

The Internet is not the Titanic, and no iceberg is lurking in the distant fog. However, the WCIT is proving to be a siren call for some, which may lead the Internet to run aground against the rocky shoals of regulation.

CSPs’ digital channels have become more important than ever