5G opportunities in the 6GHz band

A much-cited ITU report from 2012 found that "First and foremost, the evidence is fairly conclusive about the contribution of broadband to GDP growth."1 The ITU published an updated report in 2018, which included an analysis of data for 139 countries between 2004 and 2017.2 Again, the report concluded that increased fixed and mobile broadband penetration yields economic growth and we are convinced that the internet will continue to be one of the most important contributors to economic growth and improved quality of life. 5G mobile network deployment is expected to boost broadband penetration.

Mobile data usage has grown substantially in recent years, but there is potential for further growth in many countries. In particular, we have identified five areas where the additional availability of mid-band spectrum will be beneficial for 5G networks. 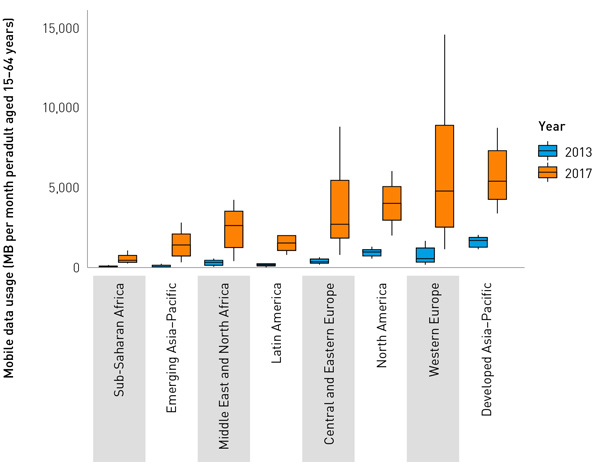 It is expected that data usage will continue to increase in many countries, although the variability between countries and regions will remain. Two important trends are likely to affect traffic growth and associated spectrum needs.

Timely availability of spectrum will continue to be important to support future developments of 5G. Compared with low- and high-frequency bands, mid-band spectrum can provide a better balance for meeting requirements for both coverage and capacity. This is probably why the recent World Radio Conference decided to include parts of the 6GHz band for study in relation to possible use for IMT.

1 R. Katz, The impact of broadband on the economy, ITU, 2012.
2 R. Katz and F. Callorda, The economic contribution of broadband, digitization and ICT regulation, ITU, 2018.

5G Opportunities in the 6GHz band

COVID-19 will accelerate the democratisation of e-sports