"Mobile network operators in emerging Asia–Pacific can deliver a boost to their overall revenue by deploying fibre, but this may also entail some EBITDA margin dilution."

Many operators, including incumbents and mobile network operators (MNOs), are investing in fibre access networks and offering retail fibre broadband access in the emerging Asia–Pacific (EMAP) region. Take-up has, in some cases, been strong and costs per-home passed are generally low, but the level of profitability is a central concern for fibre operators in EMAP. This comment analyses the profitability of running FTTx businesses in EMAP and examines some of the related strategic options that operators should consider.

Take-up of FTTx networks in some EMAP markets has been very strong. For example, we estimate that the connection rate of FTTP premises passed reached 47% in Vietnam by year-end 2017, thanks to fibre roll-out programmes from players such as incumbent VNPT, MNO Viettel and alternative fixed player FPT Telecom. However, these high take-up rates have partly been achieved through low prices: with an estimated FTTP ARPU of USD9, profitability is the primary concern for fibre providers in Vietnam. FPT Telecom, the third-largest fibre provider, generated an EBITDA margin of around 27% for its telecoms segment (for which broadband access accounted for 69% of revenue) in 2016, declining from around 28% in 2015. Nevertheless, these figures are respectable by global standards, where overall telecoms EBITDA margins are around 31%.

In Vietnam, a programme of large-scale fibre roll-outs was initiated by Viettel and as take-up increased, the incumbent VNPT was compelled to respond. Consequently, there is a significant degree of overlap between the two companies' fibre networks (as well as that of FPT Telecom), which creates downward pressure on prices and lowers EBITDA margins. Operators that are considering fibre roll-out in EMAP must assess the risk of overbuild from other players and understand the impact that this can have on deployment profitability. In the long term, Vietnamese operators will need to increase prices to improve profitability; one possible strategy is to initially offer increased speeds for free before implementing price rises.

FTTx take-up in other countries in EMAP has been lower, and this has negatively impacted profitability because the common operational costs are shared across fewer subscribers. In Indonesia, for example, Telkom Indonesia was reported to have provided guidance at the start of 2016 that the EBITDA margin for its IndiHome fibre broadband offer was around 30%, well below the overall company margin for the year of 49%. One specific problem cited by the incumbent was the high content costs for its IPTV offering, which may be alleviated as take-up increases. It is possible that content costs in Indonesia could even amount to more than half the retail price – or around USD20 – of fibre broadband and IPTV offers. In contrast to Vietnamese operators, Telkom Indonesia may benefit from retail fibre price cuts, which could generate a large increase in take-up and thereby boost profitability. As other new fibre entrants in Indonesia grow their subscriber bases, they will also benefit from reductions in cost per subscriber. However, even with relatively modest take-up rates it should be possible to quickly achieve positive EBITDA margins. For instance, MNC Play, which benefits from offering content from its parent group, reported a positive margin EBITDA in 2016, with 116 000 subscribers at year-end from 1 million homes passed and an ARPU of IDR251 000 (USD18.8).

Many MNOs in EMAP retain high EBITDA margins and, as a result, MNOs that launch fibre broadband offers may see some EBITDA margin dilution. For example, Telekom Malaysia, the fixed incumbent in Malaysia, had a lower EBITDA margin (31%) in 2016 than any of the three leading MNOs there.

In Thailand, True is the largest fixed broadband provider but is a challenger in the mobile market. This helps to explain why True's fixed-line segment generated higher margins (at 26%) than its mobile operations (17%) in 2016. However, the other two MNOs in Thailand, AIS and DTAC, both had considerably higher EBITDA margins than True's fixed-line operations, recording figures of 40% and 33%, respectively in 2016. This also means that AIS's fibre roll-out (which had 886 000 subscribers at the end of 3Q 2017) will likely be EBITDA-margin dilutive because its EBITDA margin may be around 25% in 2017. However, using these assumptions, overall EBITDA for AIS in 3Q 2017 was around 1.3% higher than would have been the case without the fibre roll-out. 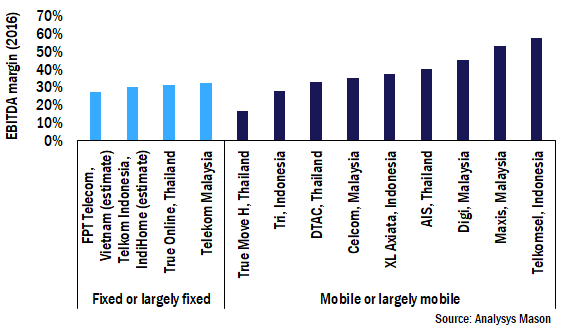 Operators that are deploying fibre access networks in EMAP must also consider the profitability of roll-outs that target higher-income areas compared with more-expansive deployments that aim to drive increases in overall fixed broadband penetration (but which may entail lower prices and a lower margin). For example, in Indonesia, cable operator LinkNet's coverage is focused on higher-income areas (coverage reached just 2.6% of households at year-end 2016), and across its business, very high EBITDA margins – of 58% in 2016 – were recorded. The high-income levels in its coverage area enabled LinkNet to generate a healthy blended ARPU of IDR407 000 (USD31) in 2016. One of the challenges for FTTH profitability faced by Vietnamese operators is that by year-end 2017, roll-outs had covered around 63% of the country's premises, which means that more low-income households – with a lower willingness to pay – are covered.

Any operator that is considering deploying fibre, or is in the initial stages of roll-out, must consider the profitability of the deployment. In EMAP, a number of fixed-line operators and fibre providers have reported EBITDA margins of around 25–35%, although where coverage is more limited, this figure can be significantly higher. Fibre providers in EMAP must set realistic expectations on profitability. For instance, while the launch of fibre broadband may help to drive future revenue growth for many MNOs in EMAP, it may also lead to some EBITDA margin dilution.