"Analysys Mason's 'IoT Scorecard 2017' for EMAP does not rank CSPs based on size alone; instead, we assess how the market pioneers have established successful IoT businesses to achieve scale and examine their best practices."

Analysys Mason has identified in its IoT Scorecard 2017 two telecoms operators in emerging Asia–Pacific that have excelled in this area: China Mobile and Vodafone. China Mobile topped the overall pioneer ranking, thanks to its heavy investment in network technologies, IoT capabilities, as well as its presence in multiple sectors and a dedicated IoT business unit to drive growth. Vodafone is also a pioneer due to its advanced vision and strategy, extensive international coverage and partnerships, which it leverages in the region to facilitate inbound and outbound IoT services. This article summarises these operators' strengths and best practices, which may serve as a guide for other operators seeking to build an IoT business. 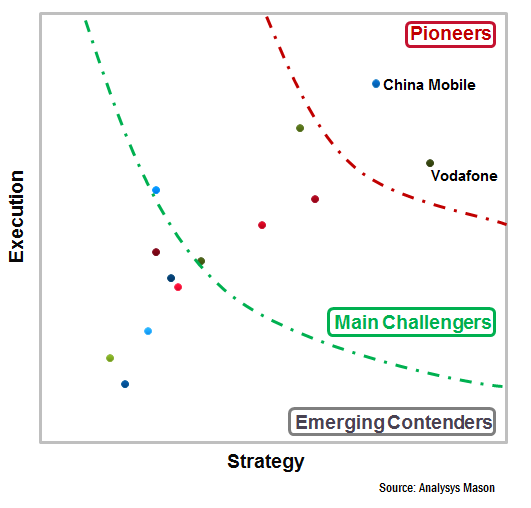 It would be easy to assume that the region's IoT market pioneers were identified according to their size. Both China Mobile and Vodafone enjoy significant scale in the IoT market. However, Analysys Mason's IoT Scorecard 2017 does not rank based on size alone. Instead, we assess how the market pioneers have established successful IoT businesses to achieve this scale and examine the best practices that they have developed to succeed. These best practices can serve as a guide for other operators just starting out in the market or at an early phase of implementing their IoT strategy. The IoT Scorecard 2017 focused on six key categories on which operators in emerging Asia–Pacific were ranked: strategy and vision, structure and organisation, ecosystem and partnership, market status and size, network status and technology, and capabilities and portfolio.

Important areas where both leading operators excelled include the following.

Structure and organisation: Both China Mobile and Vodafone scored highly in their structure and organisation for delivering IoT services. To enhance their chances of success, operators worldwide need to have an IoT division that operates with a high level of independence, but is still able to leverage the resources and brand of the core business. China Mobile established an independent IoT business unit in September 2012 – China Mobile IoT subsidiary – in order to grow its IoT business. Its primary role is to innovate and consolidate resource across the IoT value chain.1 Similarly, Vodafone IoT benefits from a high degree of autonomy, despite being part of Vodafone's Group Enterprise. It exerts sufficient influence within the group to ensure that IoT is represented in network investment decisions (for example, in NB-IoT). Moreover, Vodafone Automotive operates as a separate business unit, which is dedicated to building this new growth area. Both companies have demonstrated that success in this segment depends on a relatively independent business unit that focuses on new business opportunities separate from legacy business considerations. Other operators are adopting this best practice. For example, Indosat Indonesia has had a separate IoT operating division since 2013, and Reliance India launched a separate IoT business unit, UNLIMIT, in November 2016.

Network status and technology: While most of the operators surveyed have a strong portfolio of cellular technologies, China Mobile and Vodafone stand out as pioneers, thanks to the bold moves that they have made to support IoT-specific wide-area networks. China Mobile has conducted outdoor trials of NB-IoT with Huawei and ZTE and is a NB-IoT Forum member. It is also trialling LTE-M with Ericsson and Qualcomm. Vodafone has been at the forefront of promoting NB-IoT standards and is preparing to launch the technology commercially in several of its European markets. It is working to build the ecosystem and to establish the technology as a worldwide standard. Both operators have made significant investments in backing their preferred standards and building support from other operators and players, such as module manufacturers and application developers instrumental to the IoT ecosystem. Both China Mobile and Vodafone have led the way in ensuring that wide-area cellular networks remain relevant to IoT. Other operators in the region have run trials of LPWA technologies, but have been less active in building the case for LPWA.

Both operators ranked highly in other criteria. For example, Vodafone has invested significantly in building partnerships with other players that are active in building their IoT businesses in the region. Finally, China Mobile has invested in enabling capabilities such as its OneNet platform.

Operators have different approaches and start points for entering the IoT market, but the same best practices lead to success

China Mobile and Vodafone have taken quite different approaches to building their IoT businesses. China Mobile has typically focused on the domestic market (unsurprisingly, given the size of the opportunity), while Vodafone has pursued opportunities that require international mobility and enable it to leverage its global footprint. However, their strategies start to converge as they focus on delivering IoT services into and out of the emerging Asia–Pacific region for local and global companies alike. Both have made significant investments in developing IoT best practices across a range of criteria and leveraged these to build successful IoT businesses in emerging Asia–Pacific.