Many MSPs have highlighted the need to invest in new areas of growth in order to maintain their strong revenue performance. MSPs are diversifying in the following two ways.

Most MSPs begin by offering core services such as managed network services, as well as backup and simple security products. However, it is difficult for MSPs to differentiate themselves with these services because they are relatively simple processes that other MSPs can also offer – and at low prices. The most-successful MSPs have expanded into market segments that have the potential for significantly higher margins, such as advanced security or SaaS solutions. 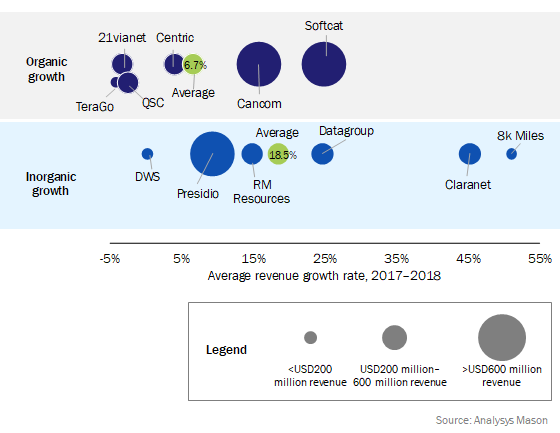 Cancom, which is based in Germany but operates in six countries, has achieved organic growth by expanding its range of products and services to cover multiple sources of revenue. Cancom reported that its total revenue grew by 18.7% in 2018 and attributed 12.1% of this growth to organic factors. Cancom reorganised its operations in 2014 to create a new cloud solutions segment after recognising that cloud services would drive future revenue growth. Cancom helped to expand its place in the cloud solutions segment beyond cloud software sales to include management of the migration process and post-migration services such as analytics and security services. Cancom also offers private cloud services via its AHP Enterprise Cloud software, which generates revenue by selling software and by managing private cloud services after they are installed.

Acquisition offers several strategic advantages for MSPs. The acquired company brings with it a pre-existing set of skills and expertise, and significantly, provides the new parent company with exposure to new clients. This, in turn, allows the MSP to cross-sell in two ways: by providing new services to its own customers and to provide services to new customers from the acquired firm.

DATAGROUP is an example of an MSP that has grown through acquisition. The German MSP provides a range of services via its 'CORBOX' offering, and its total revenue was EUR272 million for the calendar year 2018. Customers self-select a combination of packages from 12 possible services including data centre or SAP systems services. The company has increased its customer base by cross-selling additional services. Its revenue model aims to sign up customers with a single project (such as a security consulting project), adding a basic CORBOX subscription in the first year and then add additional CORBOX services between 3 and 5 years after the initial project.

DATAGROUP has built up its portfolio by acquiring specialised firms and has acquired over 20 companies since its initial public offering in September 2006. Figure 1 shows some of its key acquisitions and the specific capabilities that they provide. These acquisitions allow DATAGROUP to promote new CORBOX services to existing clients and to provide services to the acquired firm's customer base. For example, DATAGROUP acquired robotic specialist Almato in January 2018, which provided capabilities in robotic process automation.

Australian MSP DWS has also used acquisitions to gain pre-existing expertise and exposure to new clients, acquiring Projects Assured, an IT consulting specialist, in June 2018. The total number of DWS' consulting staff increased from 704 in June 2018 to 763 in December 2018. DWS also cited Project Assured's strong presence in the government and defence sector as a key factor influencing the acquisition because DWS was reliant on the banking and finance sector for 43% of its revenue. DWS can utilise the IT consulting expertise from Projects Assured to increase revenue from its existing clients, as well as cross-sell its existing services to new clients in the government sector.

We expect that MSPs' strong overall revenue growth will continue in 2019. MSPs that only offer core services will find it challenging to maintain revenue growth in a market where many players can offer the same service at competitive prices. Diversification can help MSPs to maintain their strong revenue performance by adding new services and cross-selling higher-value services over time. We expect that the present levels of M&A activity will continue in future because those MSPs that do not have in-house capabilities to diversify can do so via acquisitions.

1 Growth rates have been calculated from those MSPs in our tracker that have reported total revenue figures for both 2017 and 2018 at the time of writing.

The impact of COVID-19 on SMB IT demand