"Operators are well positioned for a role in delivering managed data, security and private cloud services, as well as services targeted at key industry verticals where they can differentiate themselves."

The market for cloud-related services continues to increase rapidly, as evidenced by the double-digit revenue growth rates enjoyed by many global IT market players. This presents both an opportunity and a challenge for telecoms operators that are seeking to capture a share of this growing market and its associated connectivity revenue.

This article compares the financial performances of cloud services from well-established global IT players with those of telecoms operators and discusses what operators are doing to take advantage of the growth trend in the cloud market. The reporting of cloud revenue is opaque – it is not always clear what is or is not included and exact comparisons are impossible. However, the reported figures give us a reasonable sense of how the different cloud divisions, broadly defined, are performing.

Global IT players continue to report huge increases in year-on-year revenue for their cloud services (see Figure 1). Microsoft Azure and Alibaba Cloud are particularly notable, with growth rates of above 90%, but many others including AWS, Google Cloud and Oracle Cloud are also growing at more than 40% year-on-year.

Revenue is shifting from legacy IT offerings to cloud-based services. For example, IBM Cloud's revenue (which includes Bluemix) grew by 14.7% between 2Q 2016 and 2Q 2017 while the overall revenue for IBM Technology Services and Cloud Platforms (which includes infrastructure services, technical support services and integration software) fell by 5.1% in the same period. 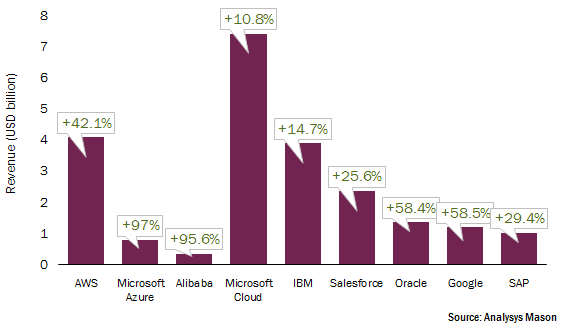 The cloud market positions of the companies represented in Figure 1 can be summarised as follows.

Some of the telecoms operators that provide details of cloud revenue are also experiencing significant revenue growth rates, albeit smaller than those of the global IT players. Deutsche Telekom and NTT are the most successful in achieving year-on-year growth of over 10% from a reasonably sizeable base (see Figure 2). Orange does not report revenue figures for its enterprise cloud services, but stated that this revenue grew by 15% year-on-year in 2Q 2017 and 37% in 3Q 2017, although its IT & Integration Services revenue as a whole increased at the lower rate of 3.3%. 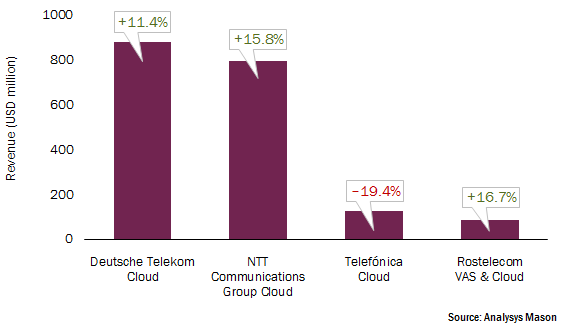 The increased competitive pressure in Spain and Latin America meant that Telefónica's revenue declined in this area in 2Q 2017 compared to a year earlier (see Figure 2). However, a positive performance in IaaS and SaaS in Spain and the launch of new projects in Brazil in 3Q 2017 translated into a year-on-year revenue growth of 25.0% between 3Q 2016 and 3Q 2017. Pricing pressures in the USA prompted AT&T and Verizon to sell off some of their data centres, because they could not compete on a cost basis in the economy-of-scale public cloud business.

Deutsche Telekom is the market leader among telecoms operators that compete in the cloud space. Its IaaS services are popular with the German financial sector, local government and SMEs (which form a significant proportion of the country's economy) because the data is stored exclusively in Germany, which has rigorous data protection regulations. NTT's cloud revenue growth has lifted the company's profits since 2Q 2016, thanks to the company's focus on medium-to-large enterprises – a market segment that has not yet been locked up by the largest cloud providers.

Telecoms operators do not generally disclose revenue from their cloud offerings, suggesting that these typically form a small proportion of overall revenue. However, operators need not be marginalised in the cloud market. They need to play on their strengths of local presence, existing relationships and having a good understanding of customer requirements, as well as connectivity provision, to innovate and partner with IT specialists rather than try to imitate their service offerings.

The public IaaS, SaaS and PaaS cloud markets require large scale and it is therefore unlikely that telcos will be able to compete directly with Alphabet, Amazon or Microsoft. However, telcos are well positioned to play a significant role in delivering managed data, security and private cloud services, as well as services targeted at key industry verticals where they can differentiate themselves.