"Operators are responding to declining legacy enterprise revenue with strategic acquisitions and more-advanced IT portfolios."

The enterprise revenue of most incumbent telecoms operators in high-income countries fell between 2015 and 2016, despite the increasing importance of connectivity for many firms. Most operators are widening their portfolios and providing a broader range of IT services (such as security and cloud) to offset this decline, with some success so far. This article examines the financial performance of operators’ enterprise divisions in developed markets and the strategies that operators are adopting to improve results. 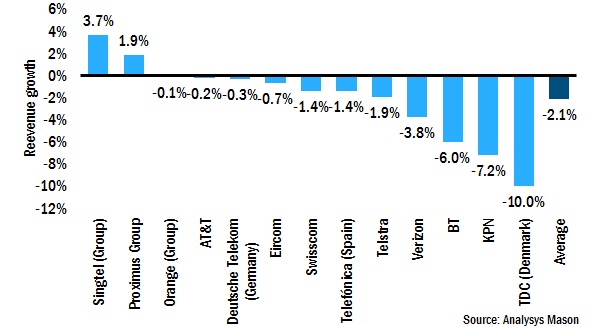 The enterprise revenue of large operators in developed countries fell by an average of more than 2% in 2016 compared to 2015 (Figure 1). Financial reports for these companies point to three common causes for this decline.

Figure 2: ICT revenue as a percentage of total enterprise revenue by operator, 2015–2016 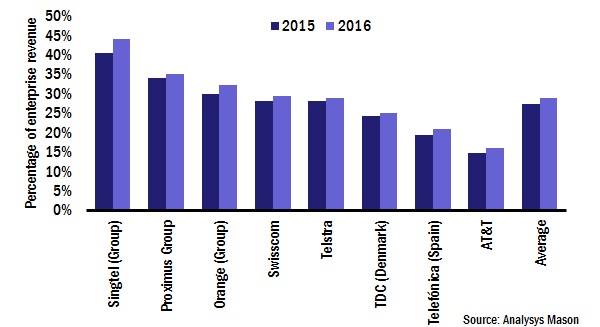 Not all operators report ICT revenue, but those that do are seeing an increase in its share of their total enterprise revenue. The services that operators categorise as ICT vary, but this segment is principally composed of services such as cloud and security, which go beyond operators’ traditional voice and data connectivity products. ICT revenue increased by an average of almost 6% between 2015 and 2016 (Figure 2). Growth in ICT revenue more than offset declines in other enterprise revenue streams for Proximus and Singtel, and growth in ICT revenue partially mitigated other operators’ losses. Operators with robust ICT portfolios are also reporting the strongest overall enterprise revenue – AT&T, Orange, Singtel and Swisscom all performed better than the average.

Acquisitions have been key to growing ICT revenue. Singtel bought Trustwave, a cyber security company, in September 2015. Singtel’s security revenue increased 10% from 4Q 2015 to 4Q 2016 and accounted for 15% of its ICT revenue in 4Q 2016 as a result. Singtel has since expanded its security services to Japan (in conjunction with a Japanese systems integration company, TIS Inc) and launched a new data centre in Singapore (DC West) to meet increased demand. Other operators also made strategic acquisitions to bolster their ICT credentials in 2016. TDC acquired two cloud-based companies, Adactit and Cirque, to improve its Microsoft Office and Skype for Business offerings, respectively. KPN acquired DearBytes to improve its security capabilities.

The key factors affecting enterprise revenue in 2017 will be whether strong price competition for traditional services continues and the extent to which product substitution erodes usage of these services. Our recent survey of 1600 enterprises showed that only 21% of SMEs and 45% of large enterprises use unified communications services, which indicates that there is potential for much higher penetration. The survey also showed that 9% of SMEs and 11% of large enterprises are considering purchasing new cloud services in the next six months. Opportunities for operators to develop new revenue streams do exist, if they can successfully position themselves to win them.