Verizon and Charter: the Trump era heralds a wave of European-style cable–mobile consolidation


"Seeing every Verizon move through the teleology of 5G misses the point; US mobile is shrinking and Verizon needs to spread its bets."

At the time of writing, speculation was rife that Verizon Communications was preparing a merger with Charter Communications, the second-largest cable operator in the USA since its acquisition of Time Warner Cable. This transaction may or may not happen, and what a Trump-influenced Federal Communications Commission (FCC) would make of such a merger is anyone's guess. However, Verizon CEO Lowell McAdam confirmed that an approach has been made and said that a deal with a cableco would make 'industrial sense'. This comment will focus on the industrial logic of such a move, as opposed to the practicalities of the deal itself or its effect on US consumers.

In pursuing a mobile-first strategy, Verizon has progressively shrunk its wireline footprint. In the early part of last decade, the company was a proponent of FTTP, but found the capex burden intolerable, and of its 22% wireline coverage, only 15% has FiOS (FTTP) availability, with the rest on low-grade ADSL. Charter acquired the larger Time Warner Cable and the smaller Bright House Networks in 2015.

Seen in terms of footprint, Verizon and Charter are, respectively, the fourth- and third-largest wireline operators in the USA. They overlap in large parts of New York state, including New York City, though most of the coverage is complementary. Together they would become number one for coverage. In terms of broadband share, they are fourth and second respectively. Without the overlap, they might together just be number one in broadband.

Mobile-first and mobile-only are not viable long-term options, even in the USA

Analysys Mason's view is that the USA is waking up to the same realities that hit Europe a few years ago: a mobile-first strategy no longer makes any 'industrial' sense, and the survival of mobile-only operators into the 5G era is in question. Market structure (with a geographical fragmentation of fixed but not mobile) has shielded the USA from this, as it has in other markets with a similar asymmetric structure such as Finland and Russia. While 5G-readiness is something to aspire to, the rationale for any merger is, from Verizon's point of view, much more immediate and banal: mobile revenue will come under increasing pressure; broadband/video has more growth potential than mobile; and fixed–wireless may not work.

Consumer wireline is a better place to be than mobile

Analysys Mason forecasts rises in consumer wireline revenue and a decline in mobile revenue between now and 2021 in the USA. The trend towards wireline – and particularly consumer wireline – is already evident from the past eight quarters' results for the four largest mobile operators and the five largest fixed operators shown above. 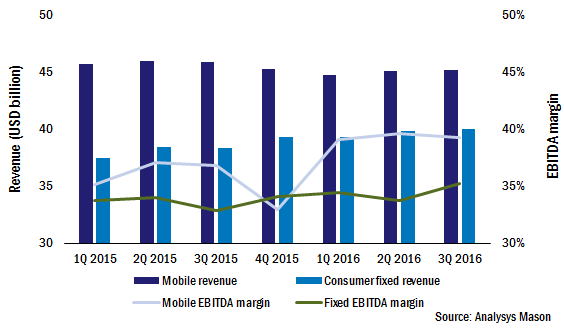 Overall consumer revenue in the USA exhibits modest growth, but as in Europe (at a remove of a few years), the balance of revenue is shifting from mobile to fixed/video and from the individual to the household. Unlike in Europe, margins remain higher in wireless than fixed overall, but it is difficult to break out the profitability of consumer. The picture above disguises the fact that only T-Mobile (which was the smallest of the four largest mobile operators at the start of the period) has grown its mobile revenue over the period. Verizon Wireless is down over 10% in the same period.

US fixed broadband is much less competitive than mobile. US broadband has no real wholesale layer, and for most households there is a choice of two access providers: a telco and a cableco. The chances of regulation becoming tighter seem extremely remote.

Verizon's wireless revenue (USD66.6 billion in 2016) dwarfs its consumer wireline revenue (USD12.8 billion) by over five to one, and Verizon needs to rebalance away from areas of probable decline.

Fixed–mobile convergence will eventually take off in the USA

Mobile networks are an inefficient and costly way to deliver video to the home, and fixed still accounts for 92% of all data traffic in the USA. Most end users will require a fixed data-pipe for the foreseeable future. MNOs will offer fat or apparently unlimited data plans to mobile smartphone end users, and like T-Mobile, gain market-share. But a mobile network is not an equivalent of a cable data-pipe, and the existence of these plans is not evidence that LTE networks have come of age in this regard. MNOs do not, and will not, allow their mobile customers to use them in this way.

AT&T dipped its toe in the multi-play water in 2016 with a converged offer of 'unlimited'1 mobile data plus TV. In Analysys Mason's opinion, this will not be enough for a mobile operator to buy into national broadcasting and OTT content provision; end users will still have to buy fixed broadband from a local provider (most likely to be the cableco), which may be able to offer a better bundle than access and content bought separately.

Verizon and AT&T are in a position very familiar to their counterparts in the rest of the developed world. They face a threat from disruptive mobile-only operators, and need to find a way to tie in customers without responding like-with-like to mobile data price erosion. Consolidation of the Verizon–Charter kind would simply follow the logic of Vodafone's M&A trail across Europe, most recently the merger of Vodafone Netherlands with the national cableco Ziggo.

mmWave (5G) fixed–wireless is a distraction

We believe that Verizon's interest in cable is at least in part motivated by the realisation that mmWave fixed–wireless (pre-standards 5G) is not the best way to address the great indoors. Though it could deliver best-in-class speeds, it requires dense fibre to backhaul, and outdoor-to-indoor coverage will be very difficult to achieve reliably without individual truck rolls and external customer premises equipment (CPE). It makes economic sense only where the mobile network also requires densifying, but it competes on costs against wireline in very few of these areas. Moreover, cable margins are strong enough to beat fixed–wireless in a price war. As BT discovered when coming at convergence from the fixed side, it is more difficult in the end to build up an innovative infrastructure and customer base (BT's inside-out mobile project) than to buy one of the operators it would be competing against (EE).

5G causes mobile networks to densify and, as a result, much more fibre coverage will be needed. Verizon has already spent USD1.8 billion on the metro fibre provider XO Communications. Without regulatory redress, it will be difficult for mobile-only players to survive long into a period where cell densification is occurring. Cablecos have suitable urban infrastructure in abundance, but for the time being, we think that retail convergence logic trumps the long-term network logic.

Buying a cableco knocks out a potential future mobile competitor

If the USA is behind Europe in the cyclicality of telecoms (not the same as technology advancement), then the view from Liberty Global CEO Mike Fries is sobering. In an interview at Davos this year, he foresaw a Europe with just two mobile operators per market, both with extensive wireline assets, and one of which would belong to the cableco (for example, Liberty Global). Given a few extra years, that could be the future for the USA too. Liberty Global's owner John Malone said in January 2017 that the Trump presidency could start a new round of consolidation, and hinted that the three major cable TV companies could join forces and enter the mobile business by acquiring T-Mobile.

1 This offer was, in reality, limited by throttling and by restrictions on tethering.