"An 02-Virgin Media merger would be a milestone for fixed–mobile convergence in the UK, heralding a general shift towards FMC across the market."

On 7 May 2020, Telefónica and Liberty Global (Liberty) agreed – subject to regulatory approval – to merge their UK operations (Virgin Media and O2) in a 50:50 joint venture (JV). The proposed merger will create a second converged operator in the UK market and is likely to increase pressure on standalone players. This article explores the strategic reasons driving the merger and explains how it is likely to affect fixed–mobile convergence (FMC) retail offers in the UK retail market in future.

There are immediate financial benefits for both companies from the merger including GBP5.7 billion net cash proceeds for Telefónica and GBP1.4 billion for Liberty Global and the JV might use Virgin Media’s accrued tax losses to reduce future tax liabilities. However, this deal is also being driven by the following strategic concerns.

The JV offers Telefónica and Liberty Global an opportunity to realise cost synergies and to share best practices (for example, O2 can share its customer care procedures). Telefónica believes that more than GBP1billion revenue growth will be available from the bundling opportunity as part of this merger.

The UK telecoms market is highly fragmented, and FMC penetration in the country – at 17.5% of all broadband connections as of 4Q 2019 – is low compared with most countries in Europe. Virgin offers significant incentives to encourage customers to take mobile and fixed together, but its FMC base is below 25% of the total broadband base and has been hindered by strong competition in the mobile market. The proposed merger is likely to significantly boost its FMC prospects.

It is unclear how any retail offer would be structured, but the two brands are unlikely to be merged initially. VodafoneZiggo, a 50:50 JV between Vodafone and Liberty Global in the Netherlands, has performed well in terms of revenue and market share since its 2017 merger (see Figure 2) and it has maintained the separate Ziggo and Vodafone brands for fixed and mobile services. Instead of a bundled offer, customers that take Ziggo broadband and Vodafone mobile can take advantage of a EUR5 per month discount and several more-for-more bonuses.

In the UK, a similar FMC promotion would enable cross-selling and would also act to minimise churn. To date, the FMC benefits offered by UK operators have been conservative, but the merged entity may choose to act in a more-aggressive way in order to quickly establish a converged base. Analysys Mason's 2019 Connected Consumer Survey shows that there is strong crossover between the two customer bases (see Figure 1), which should ensure an immediate churn-insulating effect from any FMC offer, but revenue cannibalisation needs to be taken into account. If we assume that a GBP5 monthly discount is made available to O2 retail customers that take Virgin Media, total discounts would amount to around GBP25 million per month.

A secondary product, such as the O2-branded FMC bundle available in Spain (which is a 'bare-bones' mobile–fibre, dual-play package), could also be launched as part of the merger. This could be marketed under the O2 brand but would also be a good fit for GiffGaff. This offer would be attractive primarily to cord-cutters, with fast broadband speeds a clear incentive. Our Connected Consumer Survey shows that the O2 mobile brand has a high percentage of TalkTalk and PlusNet subscribers – a customer set that may be interested in a 'budget' internet offer such as this. For this to be a truly universal offer for all O2 customers, non-cable areas could be covered by fixed-wireless, or even wholesale fibre connectivity.

Figure 1: Parallel service providers. by percentage of total base of Virgin Media and O2 customers, 20192 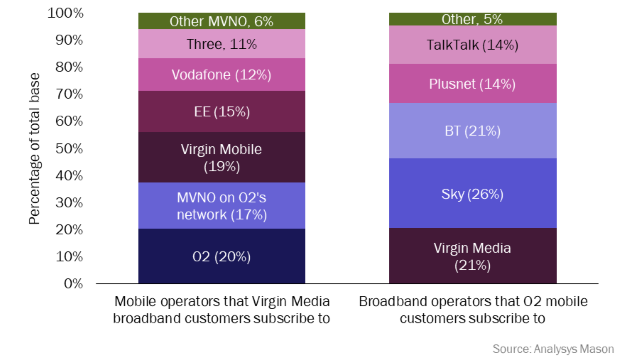 A Virgin Media–O2 merger would be a milestone for FMC in the UK, heralding a general shift towards FMC across the market

The UK's last major fixed–mobile consolidation (EE and BT) failed to bring widespread convergence to the market, largely because of the brand clash between BT and EE, which has not yet been resolved (there is still no cross-selling offer between the two brands). In contrast, the Virgin Media and O2 brands have strong compatibility, and a merger is likely to lead to more-widespread take-up of FMC offers. This is likely to result in the following responses.

1 Brazil, Germany, Spain, and the UK.

2 Giffgaff (a subsidiary of Telefónica) is included in the ‘MVNO on O2’s network’ category.