"It is too early to tell which approach is best for operators; it is likely that the successful operators will be the ones that are most willing to learn from mistakes and adapt their propositions accordingly."

Operators’ attempts to expand their device portfolios beyond handsets have often been half-hearted. Weak value propositions and the lack of strong positioning with core services have limited the adoption of consumer IoT devices. However, operators are beginning to experiment more to identify the potential value of consumer IoT, to both support core propositions and diversify into new growth areas. This comment explores the different approaches that operators are taking and summarises the findings from Analysys Mason’s Consumer IoT: case studies and analysis.

Operators’ approaches differ significantly; best practice has not yet emerged

Both Orange and Vodafone launched consumer IoT initiatives at the end of 2017. These were the first of several operator attempts that used cellular connectivity to build a more cohesive approach to consumer IoT.

There is not yet a simple mutually exclusive, collectively exhaustive (MECE) classification of consumer IoT projects, despite the attempts to build a more coherent approach. The initiatives that are currently available are in a mix of different domains (smart home, out-of-home and connected car), are often being pursued by different operator business units, have different (and not always clearly defined) objectives (such as reducing churn, and generating new revenue) and are being developed differently (for example, by internal developers or third-party developers). However, it is possible to split operators’ approaches to consumer IoT into three broad categories.

Operators following this approach mainly resell devices from third parties but may use a different strategy for applications in areas in which they have strong expertise. For example, Verizon is reselling Samsung’s SmartThings tracker (probably as an experiment to assess demand). However, it has taken a different approach for devices in the connected car sector, and has used its telematics expertise to develop its own device, Verizon Hum. At present, separate business units manage each of these propositions and they are not marketed together. AT&T takes a similar approach. It resells some devices such as pet trackers, but has built a full proposition for the smart home sector (Digital Life). It is also building on its automotive expertise to create an aftermarket car solution with Harman Spark. The operator resells the device but has influenced the device specifications and is responsible for marketing and pricing the proposition.

Operators have traditionally resold partner devices; this model is a familiar one and operators have the channels to do this well. However, if consumer IoT is successful, operators may want to expand their role in the value chain and have more influence over device specifications and commercial propositions in order to maximise revenue and increase margins.

Vodafone took this approach with ‘V by Vodafone’, which was launched in November 2017. Telstra’s initial marketing suggests that it will adopt a similar strategy for Telstra Locator. Vodafone is using the V by Vodafone brand to link disparate devices (such as cameras and trackers) across domains (smart home, out-of-home and connected car), and is applying a common pricing structure for each device.

Delivering a proposition that demands collaboration between different business units internally to present a unified proposition externally is a bold move. Vodafone’s strategy requires significant investment and a long-term outlook. The risks are higher than those associated with the reseller model, but there is potential to generate greater returns if successful.

Orange has adopted this strategy and is targeting LiveBox customers with an array of smart home services. It is hoping to create a presence across the consumer IoT value chain and has identified two key verticals to focus on: smart home and individual IoT. To realise this goal, Orange first focused on device sales to build consumer awareness, and then went on to develop smart home offerings and consumer IoT as value-added services to support its core business. Orange is committed to expanding on the peace of mind theme which is the focus of both verticals. It is also extending its consumer IoT reach to cover the out-of-home domain with devices such as asset and people trackers.

By taking this approach, operators can use consumer IoT to enrich and differentiate the core business in order to reduce churn and create additional value for consumers. This approach forms part of a more strategic move to own the customer relationship.

Operators are making different decisions about which products to offer

Figure 1 illustrates some of the consumer IoT products that operators have launched. Operators are making different decisions about products as well as business models and the relationship between new services and the core business. Furthermore, they are evaluating the interplay between smart home, out-of-home and connected car platforms to understand consumer requirements for connected devices, as well as consumption patterns. 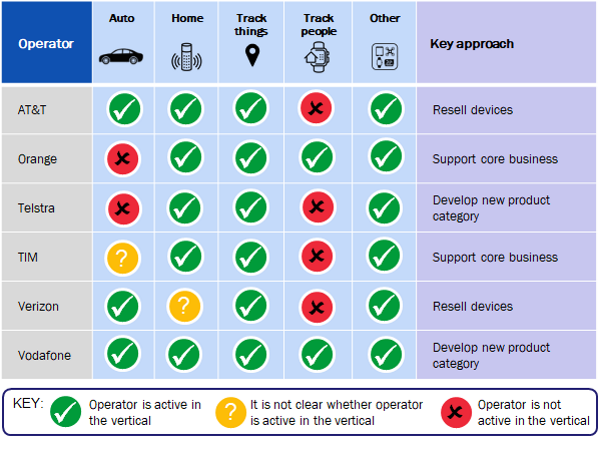 Consumer IoT is potentially bewildering; it is made up of a disparate range of devices and use cases with little to unify them except a value proposition that is founded on peace of mind, safety and utility. There are many new product categories and solutions that an operator could offer. Best practice will take time to emerge, but operators entering this market should be clear on what they want to achieve. It is too early to tell which approach is best for operators; it is likely that the successful operators will be those that are most-willing to learn from mistakes and adapt their propositions accordingly.