"The data market in Sub-Saharan Africa is growing, supported by 4G, and is offering better monetisation opportunities than in some other regions."

Mobile operators in Sub-Saharan Africa (SSA) scored relatively highly in terms of customer satisfaction compared to those in other regions according to our latest Connected Consumer Survey. Furthermore, there was a visible improvement in the 4G penetration level among respondents in 2017 compared to those surveyed in 2016, which contributed to an increase in data usage and a demand for higher data allowances.

Results also suggest that operators in the region can reap higher returns for increased usage than those in other regions, thereby highlighting the importance of moving customers to higher data tiers. This comment shares some of the results from this survey and explores the drivers of customer satisfaction, the impact of 4G on data usage and spend, and how operators can improve their data monetisation.

Network performance plays the biggest part in affecting NPS in Sub-Saharan Africa, but data allowance is important too

We ran a survey of mobile users in Kenya, Nigeria and South Africa between August and October 2017, with 1000 respondents per country. Respondents were asked to rate how likely they were to recommend their mobile operators, on a scale from 0 (not at all likely) to 10 (definitely). The Net Promoter Score (NPS) results are shown in Figure 1.

Safaricom had the best performance in the region, whereas MTN (South Africa) received the lowest scores. We also observed that the difference in NPS between operators was more pronounced in Nigeria and South Africa (where small players took the lead) than in Kenya, where Safaricom (the incumbent) scored more highly than its competitors. Telkom in Kenya gained 20 NPS points between 2016 and 2017, while the NPS for Airtel, Etisalat and Glo in Nigeria, and MTN in South Africa decreased during this period. 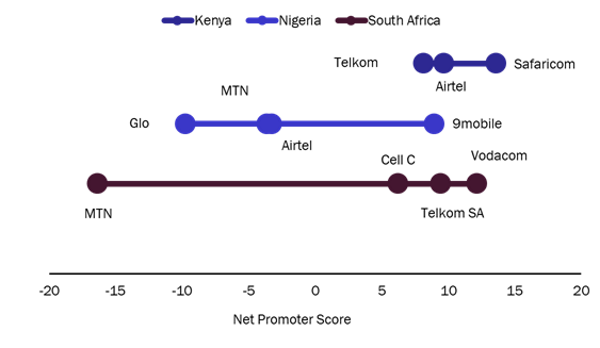 Some aspects of mobile services had a greater impact on individuals’ willingness to promote (and, therefore, on NPS) than others. We analysed the NPS results against customers’ satisfaction ratings for particular aspects of their mobile service. The ranking of these factors in terms of their impact on NPS, averaged across all three of the countries, is as follows (from highest to lowest).

The impact of network coverage was particularly strong in South Africa. Here, Vodacom had the best rating for this aspect, and Cell C had the worst. MTN scored well on this metric but had the lowest NPS in South Africa due to poor scores for other metrics (chiefly, customer services, data allowances and service pricing). In Nigeria, data speed stood out as the most critical service aspect.

Data allowance size has a strong effect on satisfaction, and highlights the issue of value for money in the region. Operators’ poor scores in terms of price satisfaction also play a role in bringing the NPS down but are perhaps less influential overall than one might expect.

Between a quarter and a half of the mobile data users surveyed in each country reported accessing a 4G service from their phone. This reflects the overall increase in the supply and demand for low-cost smartphones and the greater appetite for access to apps and services, as well as improved 4G coverage.

The demand for more data was high due to the large share of users on high data tiers, particularly for those using 4G. For example, in South Africa, one third of the respondents using 4G reported consuming 2GB or more each month. This could be attributed to the high usage generally associated with higher-end 4G users compared to non-4G users, but also to the high prices of smaller data bundles in South Africa. This situation makes it better value for heavy data users to purchase large data bundles rather than multiple smaller ones.

The data market is growing in SSA, creating better monetisation opportunities than in some other regions

The survey results show that the mobile data market continues to grow, thereby enabling operators to enjoy strong returns on higher-volume plans. This contrasts with what is seen in more mature markets such as France and Germany, where we observed an inability of operators to reap higher marginal returns for increased usage.

It is important to note the distribution of customers across price points. We noticed a steep increase in the average spending across the region for very high data tiers (data allowance of 3GB and above) compared to that seen for the sub-1GB category (Figure 2). Overage policies have probably added to this trend, especially in South Africa, where more than 60% of customers on data plans of 2GB and above exceed their allowance, and where Vodacom and MTN used to charge ZAR2 (USD0.15) and ZAR0.99 (USD0.07) per out-of-bundle megabyte of data.1 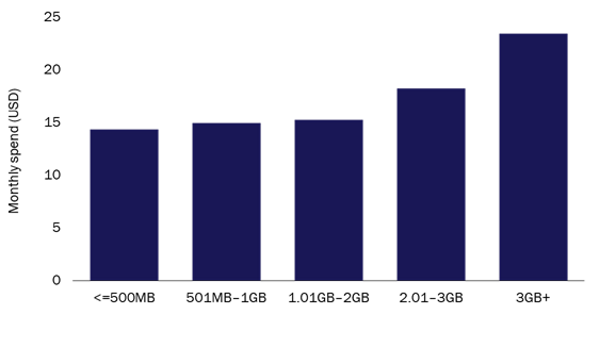 Our results show that there is a clear demand for higher data allowances in the region. As well as satisfaction with the allowance size acting as a strong predictor of NPS, a higher data allowance is the dominant attractor for customers looking to make changes to their mobile plan. These findings suggest that mobile operators should consider the following.

1 Vodacom and MTN have since taken steps to remedy this issue and significantly reduced their charges in late 2017.