"Operators looking to enter the mobile payments market should start with basic mobile wallets and slowly introduce more-advanced features as customers become familiar with their usage."

The adoption of digital payment services in the Middle East and North Africa (MENA) has been relatively slow because of the embedded cash culture, even when shopping online. However, the financial services market is ripe for digital disruption because the region has a large young and technology-savvy population.

Operators have an opportunity to provide services such as mobile payments and consumer credit as the adoption of ecommerce in MENA grows. The majority of telecoms-led mobile digital wallets that are available in the region offer basic functions such person-to-person credit transfer, but they do not yet support online payments.

In this article, we argue that ecommerce offers telecoms operators an opportunity to play a more active role in the digital payment ecosystem and in supporting ecommerce providers. However, they will need to offer an appealing and differentiated proposition in order to convert cash users.

The adoption of digital payments in MENA has been relatively slow because of the population’s inclination to use cash and the slow modernisation of the banking industry. However, there are favourable conditions in the region that can spur the take-up of digital payments and disrupt the traditional payment value chain.

Mobile wallets have received renewed interest over the last 12 months, particularly in the Gulf region, as the regulatory constraints on partnerships between telecoms operators and banks have eased off and the governments are keen to increase financial inclusion and reduce the amount of paper money in circulation. Some recent mobile wallet launches include Batelco’s bwallet, Omantel’s eFloos and STC Pay.

Cash-on-delivery is still the top payment method used by online shoppers, but the adoption of mobile wallets is increasing

The population in MENA (especially the Gulf region) has a high spending potential and a high level of internet and smartphone penetration. As a result, the adoption of ecommerce is growing. The market has also benefited from investments from the likes of Alabbar and Amazon.

62% of consumers in Morocco, Oman, Qatar, Saudi Arabia and the UAE shop online, according to our consumer survey of 4500 smartphone users in these countries, conducted between August and October 2018. This is an increase of 15 percentage points (pp) since 2016. However, the use of cash-on-delivery (COD) is still the preferred method to pay for goods and services online in the region (Figure 1).

Our survey also revealed that operators have generally been outperformed by global players (such as PayPal) as providers of mobile money services. In the UAE, Apple Pay and Samsung Pay already have the second- and third-largest user bases of all mobile money services, respectively, despite being introduced only in 2018.

Figure 1: Penetration of ecommerce among respondents and the proportion cash-on-delivery as a payment method for online shopping on a phone or tablet, by country, MENA, 2018 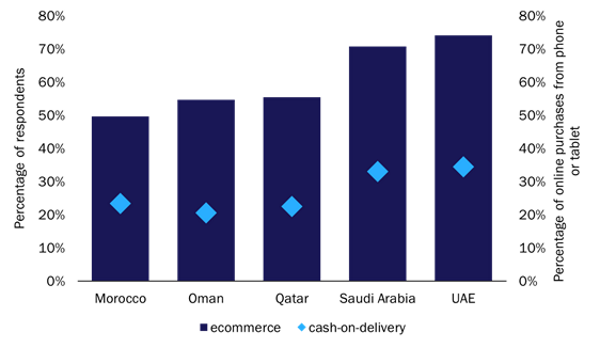 We do not expect that operators will play a major role as ecommerce providers. However, we believe that there is a potential role for operators as ecommerce enablers. So far, operator-led mobile wallets in MENA (including those mentioned above) include features such as the ability to pay merchants and to add or transfer funds to and from other wallets. They have yet to support the ability to pay for goods and services online.

Operators need to first ensure that customers are provided with a seamless experience, from the point of signing-up to the use of the service itself, in order to encourage adoption and usage. They can also apply some of the strategies deployed by fintech companies and telecoms operators in Africa, Asia and Europe to improve the stickiness and perceived value of their mobile wallets.

Operators can then consider more-advanced features such as supporting ecommerce providers. Partnerships can be mutually beneficial: operators can increase their addressable market while online merchants can reduce the payment friction and cut the operating costs and risks associated with cash transactions. For example, MTN, Orange and Safaricom released APIs to accept payments from online merchants and mobile applications in Africa.

The transition from paying by cash to using digital wallets is likely to continue to be slow in the short term in MENA, but operators can play an active role in increasing consumers’ acceptance of digital payments. The growing adoption of ecommerce by the large young and technology-savvy population offers an opportunity to speed up this conversion.

1 The World Bank (2018), The Global Findex Database 2017. Available at https://globalfindex.worldbank.org/#about_focus.

COVID-19: telecoms operators will not be immune to the impact of the outbreak – recovery could take up to 4 years