"Many operators in the Middle East claim that enterprise is central to their growth ambitions, but their activities do not support this."

Incumbent operators in the Middle East face the same basic challenge in the enterprise market as operators in other high-income countries: limited growth in core connectivity revenue. However, the collective response of the operators in this region is different from that of their peers in Europe, North America and elsewhere.

Some of this disparity can be ascribed to inherent differences in the market that operators may not want or need to address, but we believe that other factors deserve greater attention. In particular, operators should do more to respond to the forthcoming enterprise revenue gap, and in turn, should place a greater focus on satisfaction levels.

Operators in the Middle East appear to lag behind their counterparts in other high-income countries (such as Germany, the UK and the USA) in several areas of the enterprise opportunity. This is summarised in Figure 1 and is discussed in more detail below.

Figure 1: Comparison of the enterprise efforts of operators in the Middle East and those in other high-income countries 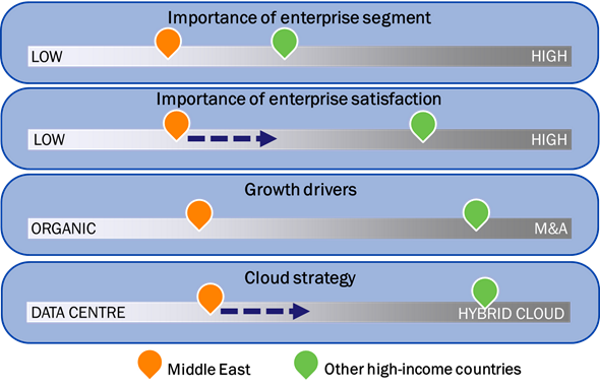 Enterprise is stated as a key area of activity for operators in the Middle East. Many regional operators emphasise the importance of this segment for growth in their annual reports. For example, Zain’s 2017 annual report states that “B2B (Enterprise) is one of the most dynamic and innovative areas at Zain, and a growth engine for our operations.”

This is in contrast to operators in other high-income regions that typically dedicate at least one slide of each quarterly financial presentation to the enterprise segment, and often report the split of enterprise revenue (for example, incumbents in eight of the ten largest EU countries report enterprise revenue).

All of this is not conclusive of the lack of attention from operators; all major operators in the Middle Eastern have enterprise teams or divisions. In the UAE, both operators recently underwent restructuring to better address the business market; Etisalat Digital and du’s ICT Division were created. Operators in the region may also be more reluctant than their overseas counterparts to share what they are doing with competitors. Overall though, the limited detail provided by operators in the Middle East means that they are vulnerable to suggestions that the business market is not as high on the agenda as they claim.

Operators in the Middle East are gradually paying more attention to customer satisfaction levels, but we understand that few are systematically measuring levels of enterprise satisfaction and trying to address common problems. This again is different from the activity of operators elsewhere, some of which (such as Macquarie Telecom in Australia) are using satisfaction levels as a differentiator. As we have written elsewhere, and as Macquarie Telecom has demonstrated,1 improving satisfaction will help with retention, cross-selling and the reduction of outstanding debts. All of these factors are important at a time when connectivity revenue for most operators is flat, at best.

Operators in the Middle East may need to move more quickly in understanding and improving satisfaction, given its importance.

Growth drivers: acquisition is driving enterprise growth elsewhere, but not in the Middle East

We are not aware of any recent enterprise deals by major regional operators in the Middle East, other than a couple of relatively small acquisitions by Zain, of FOO and NXN. The contrast with other parts of the world is striking; for many operators, acquisition is becoming part of the standard model to gain growth. Acquisition has been part of the enterprise growth story in the Middle East historically (STC Solutions, the IT and systems integration division of STC, was founded on the basis of an acquisition) and there may be reasons for the lack of recent activity (such as the lack of potential acquisition targets or the belief that solutions can be developed internally), but it is striking nonetheless.

Operators in the Middle East may need to explore acquisitions if they are to grow their enterprise revenue beyond connectivity.

Cloud strategy: it is more important for operators in the Middle East to own data centres than to offer cloud services

The focus for many operators internationally has been the provision of services, rather than real estate. CenturyLink is an extreme example but reflects the thinking of others. Its strategy has shifted from trying to become a global data centre provider by buying Savvis in 2011, to selling these assets in 2017 and, more recently, concentrating on becoming an accredited partner for IBM Cloud (in August 2018), AWS (September 2018) and Microsoft Azure (October 2018). Its focus is on working with enterprises to provide them with cloud services, rather than on infrastructure ownership.

Other operators have a similar strategy: KPN is explicitly taking a ‘public cloud first’ approach, on the basis that if it is not promoting that strategy to its existing customers, other service providers will.

In the Middle East, the stress is different; cloud services are gaining prominence, but the shift is gradual. AWS is expected to open its first data centre in Saudi Arabia and Microsoft Azure is building its presence in the region (albeit on Etisalat infrastructure, at least initially), meaning that the pressure from others offering cloud services will only grow. The increase in the local capability of these global players will also mean that operators can no longer rely on data sovereignty rules to protect their offering.

Of course, operators in the Middle East do not need to follow what their counterparts are doing elsewhere. There may be good reasons to explain why they are taking a different approach (for example, lower levels of competition may take the pressure off customer satisfaction). However, incumbent operators looking for enterprise revenue growth may need to increase enterprise activity, and the developments elsewhere should provide a useful guide.