Business survey 2019: improving the awareness of IoT is key to increasing the adoption of IoT solutions


"The priority for IoT solution providers is to publicise their products more widely and to provide proof points on the business case for IoT in order to increase awareness and adoption."

Many companies (especially small and medium-sized enterprises (SMEs)) worldwide do not know what IoT is, despite IoT solution providers’ efforts to raise awareness. There is a high level of interest in IoT among those businesses that are familiar with the technology, but the level of adoption remains low. This suggests that IoT solution providers need to do more to explain what IoT is to businesses and to demonstrate its benefits to those that are already aware of the technology but remain uninterested. This article discusses some of the findings of Analysys Mason’s business survey,1 and provides recommendations for IoT solution providers on how to increase the awareness and adoption of IoT.

Businesses are sceptical about the potential impact of IoT on their operations, despite a growing awareness of the technology

Businesses are not adopting IoT solutions, largely because they are unaware of the technology. Indeed, this factor appears to be more important in determining the adoption of IoT than others, such as the uncertainty of the IoT business case. Solution providers therefore need to work to increase the awareness of the technology.

Figure 1: Percentage of businesses at each stage of IoT development, surveyed countries, 2019 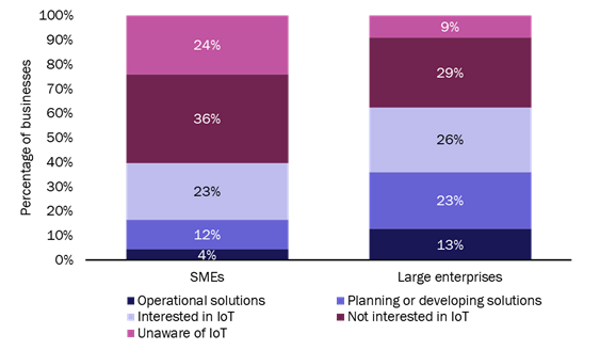 The largest group of businesses was formed of those that were not interested in IoT despite knowing about it (36% of SMEs and 29% of large enterprises). This suggests that many businesses, especially SMEs, remain unconvinced by the IoT use cases, or do not have the resources and expertise to deploy them.

The level of interest in IoT is similar for SMEs and LEs (23% and 26%, respectively). However, SMEs lag behind in terms of their development and deployment of IoT solutions; LEs are nearly twice as likely as SMEs to be planning or developing IoT solutions, and three times more likely to have operational solutions. This is probably due to LEs’ bigger budgets and resources for exploring how and where IoT can be exploited in their businesses, and the fact that they are more amenable to adopting customised IoT solutions.

This suggests that SMEs represent an untapped opportunity for IoT solution providers, so long as they can reduce the barriers to adoption of IoT solutions such as cost and operational complexity, and provide adequate support after deployment. IoT providers have generally struggled to effectively address SMEs’ needs because IoT solutions tend to be highly customised, complex and costly.

The interest in IoT is strong in MEA and APAC, despite a comparable level of adoption in Western Europe and the USA2

Our survey revealed surprising regional differences in the levels of interest in, and the adoption of, IoT solutions. Businesses in APAC and MEA expressed the highest levels of interest in IoT, even more so than those in Western Europe and the USA (see Figure 2). This can be explained by local IoT providers’ growing efforts to raise the awareness of IoT in APAC and MEA, combined with the push by their respective governments to position IoT as a key pillar of their national development and modernisation programmes.

Figure 2: Percentage of businesses interested in IoT and those with operational IoT solutions, by country/region, 2019 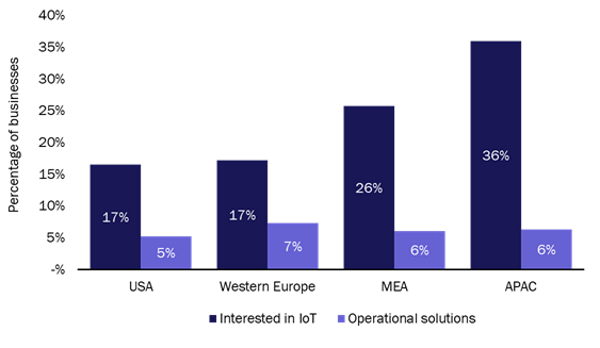 Businesses in APAC and MEA now have similar levels of IoT adoption as their counterparts in Western Europe and the USA. There are more-significant differences between SMEs and large enterprises in terms of their propensity to deploy an IoT solution in Western Europe and APAC than elsewhere. This suggests that IoT providers in these markets are focusing most of their attention on large enterprises.

Overall, these results suggest that IoT solution providers in APAC and MEA have been more successful in raising awareness of IoT than those elsewhere.

The lack of awareness in IoT remains the biggest obstacle for adoption. The priority for IoT solution providers is therefore to raise awareness of IoT as a competitive advantage and to provide case studies and proof points on the business case for IoT. They should also publicise their products more widely with clear messages.

Our results revealed that businesses in selected markets in APAC and MEA have managed to bridge the gap with their peers in Western Europe and the USA in terms of IoT adoption. This suggests that there is a potentially large opportunity for IoT solution providers in emerging markets, and that IoT solution providers have done a better job of extolling the benefits of IoT in these regions.

1 Analysys Mason interviewed over 2300 SMEs and 670 large enterprises across 10 countries in 1Q 2019 about their use of, and levels of satisfaction with, providers of telecoms and ICT products. In the context of the survey, IoT refers to connected devices and systems that use data gathered by embedded sensors and actuators in machines and other physical objects. For more information, see Analysys Mason’s Business survey 2019: business interest in, and adoption of, IoT.