"Operators in the Middle East should increase businesses' awareness of LPWA services, develop simple solutions and nurture the developer ecosystem to support the adoption of such services."

IoT services providers in the Middle East have announced at least 16 low-power, wide-area (LPWA) networks since 2016. However, we believe that only three start-ups (and no established operators) offer commercial LPWA network services as of December 2018. This is in stark contrast to other regions such as Western Europe, in which 17 established telecoms operators run two thirds of the region’s 35 commercial LPWA networks.

The delay in commercialising LPWA services in the Middle East may not affect operators’ ability to address the demand for IoT services in the long term, but it highlights the relatively low priority of IoT in the region. If operators are serious about commercialising LPWA solutions, they will need to think about how to accelerate their launch. This comment presents a review of LPWA deployments in the Middle East and discusses what operators can learn from more-advanced markets in order to address opportunities.

The availability of LPWA services remains limited in the Middle East

Analysys Mason’s LPWA tracker shows that 5 of the 16 LPWA networks that have been announced in the Middle East since 2016 are at a pre-commercial stage (all of which belong to established telecoms operators).1 Only 3 of the 16 are believed to be commercially available to end users (all of which are owned by start-ups) (Figure 1).

LoRaWAN and NB-IoT are the most-frequently adopted technologies by local providers. Only EITC (du) and Etisalat have adopted more than one technology. Outside the Middle East, the leading operators (including AT&T, Telefónica, Verizon and Vodafone) have adopted multiple LPWA standards. This approach enables operators to meet the requirements of different use cases and to reduce the risks of selecting the wrong technology. 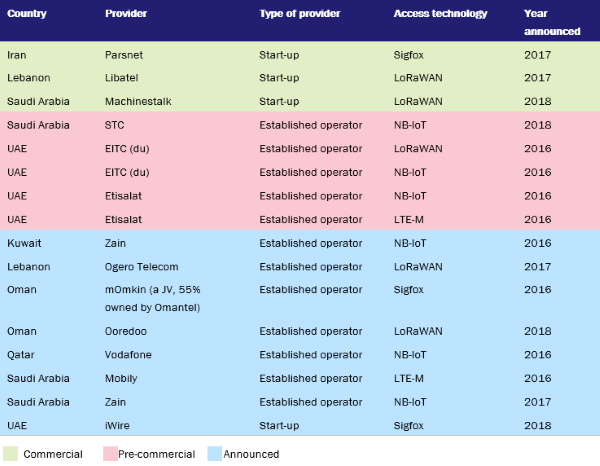 The demand for LPWA is small due to limited awareness and commercial availability, but there is potential for strong growth

Operators in the Middle East have been slower to roll out and commercialise LPWA services than those in more-mature markets because of the perceived low market demand for IoT and because priority was given to other services such as 4G. The IoT ecosystem is also underdeveloped in the region as operators’ partners lack the skills to build LPWA solutions.

Most enterprises in the Middle East have a limited awareness and understanding of IoT. There are still significant barriers to IoT, even in the UAE, which is considered to be one of the most-advanced nations in terms of IoT. According to our survey of enterprises, over 60% of enterprises in the UAE are unsure about, unaware of or not interested in IoT. The limited number of high-profile contracts also does not help to instil confidence in the technology, although this situation is slowly changing.2

However, we believe that demand will slowly grow as the number of proof points increases. Analysys Mason forecasts that the number of LPWA connections in the Middle East and North Africa will increase from under 1 million at the end of 2018 to 33.6 million in 2022. Tracking (for example, of bicycles and high-value assets) will represent more than 40% of the market. In addition to smart city applications, which have already been piloted, other opportunities will be in the agriculture (for example, livestock tracking and flood threat monitoring), gas and oil (for example, pipeline monitoring) and utilities (for example, smart meters) sectors.

LPWA’s long-range connectivity and low-power technology will be particularly useful in consumer wearables, which can be used, for example, to track people or pets or monitor health. The take-up of smartwatches could increase, but this may rely on large device manufacturers and operators in the region adopting LTE-M.

Operators that have or are planning to launch LPWA networks commercially need to think about how to act based on learnings from more-advanced markets. Options to consider include the following.

Operators should prioritise launching their LPWA networks to start monetising their network investments. However, the delay in launching these networks allows them to learn from the experiences of early adopters. Once the network has been launched, operators should focus on ‘easy wins’ with simple LPWA connectivity solutions, given the limited commercial awareness of IoT in the region, before considering moving into more-complex IoT propositions.

1 That is, the network is built but commercial services have not yet been launched.

2 For example, Etisalat secured a contract to supply and install IoT-enabled fire alarms to 300 000 villas in the UAE in partnership with the Civil Defence in 2018. We believe that the service has not yet been launched as of January 2019.

3 None of the established operators listed in Figure 1 have a web page dedicated to promoting LPWA services or providing pricing information.