The high proportion of immigrants and the great cost of international calls in the Middle East and North Africa (MENA) have driven the adoption of over-the-top (OTT) voice services. Most operators in the region have attempted to neutralise the effect of such services by disrupting or banning them, often with the support of regulators.

At a time when some regulators have begun to soften their stand on OTT services, and more consumers resort to workarounds to overcome usage restrictions, operators should look for new ways to address the OTT threat while monetising their growing popularity. In this comment, we will share some primary data on OTT usage in the region and discuss recent examples of bundling OTT voice services in the UAE.

The use of OTT communications services in MENA is widespread and increasingly fragmented, according to a survey of 4500 smartphone users in Morocco, Oman, Qatar, Saudi Arabia and the UAE during the summer of 2017. WhatsApp remains the dominant application, with penetration ranging from 69% in Qatar to 78% in Morocco, but there is a range of other applications gaining traction, reflecting the diversity of the population (Figure 1).1 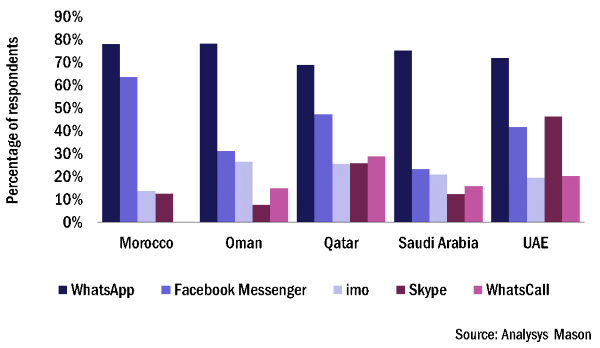 Most regulators and operators block or disrupt OTT voice services, but their position is slowly changing

Mobile operators in the Middle East have generally adopted a strong defensive stance against OTT players by blocking their services, either partially or completely, to limit the erosion of revenue from voice, especially from international traffic.2 Operators have relied on regulators to impose restrictions and to filter out OTT-related traffic (Figure 2).

However, there is a growing trend towards a softening of the regulators’ stance on some OTT voice applications, prompting operators to adopt a more proactive approach by offering legal alternatives such as the following.

Historically, mobile operators in the region considered marketing partnerships with OTT messaging providers in order to capitalise on the growing popularity of OTT services and to assist with the branding of their applications to drive the adoption of data tariffs. However, this model did not extend to the voice features of those applications due to the threat of the further substitution of international calls.

At the beginning of 2018, du and Etisalat launched a new legal VoIP service a few days after Skype was blocked in the country.3 The service offers unlimited app-to-app voice and video calling, but is restricted to two authorised third-party applications (BOTIM and C'Me).

The following two tariffs are currently offered by both operators.

While the practice of bundling OTT services is quite common, especially for social media and messaging applications, offering voice as a stand-alone service is new for the region. Analysys Mason believes that du and Etisalat can achieve a much higher return per megabyte compared to the standard price for mobile data, while the cost to the operator and to the OTT service provider would be minimal. However, restricting usage to two less popular applications at a relatively high cost might reduce the appeal of their offerings to existing OTT users.

du and Etisalat can eventually consider adding new applications and can structure the offers around the type of application used or the destinations contacted. While such an approach will not completely compensate for the loss due to illegal applications, it will strengthen the operators’ position in the voice market, targeting mid-to-high value customers who have been frustrated by the unreliability of other OTT applications.

While it is unlikely that regulators in those Middle Eastern countries with a high proportion of expatriates, such as Saudi Arabia and the UAE, will fully liberalise OTT services, operators should consider introducing bundles to differentiate their services and appeal to consumers who have grown accustomed to using such OTT services. This novel approach in the region, if successful, could serve as a blueprint for other operators.

1 Further analysis will be included in an upcoming report from Analysys Mason titled Connected Consumer Survey 2017: OTT and digital economy services in the Middle East and North Africa.

3 Skype was legally blocked prior to 2018 because of security concerns. However, it was still possible for users to use Skype by connecting their smartphones to a Wi-Fi network or by using a computer.