"Snapchat and Kik are challenging Facebook Messenger's platform ambitions among younger users in the USA."

The commercial success of social and messaging apps such as Facebook, Snapchat and WhatsApp depends on advertising, but their ambitions also reach beyond chat to becoming platforms for a wide range of content, services and transactions. Our smartphone analytics study1 tracks how successful these services are in increasing user engagement across different countries worldwide. Our study has revealed the following key insights.

Facebook is in a strong position in terms of user engagement, but still has strategic issues to resolve

Facebook announced that its Messenger app reached 1.2 billion active users in April 2017, equalling WhatsApp in terms of scale. Messenger still trails the core Facebook app, which had over 1.8 billion active users at April 2017. These apps were also the most commonly used social and communications apps in our smartphone analytics study. WhatsApp was used by most German panellists (83%). In the UK and the USA, Facebook and Facebook Messenger were the most popular services, with overall penetration reaching between 72% and 76%. WhatsApp is widely used in the UK, but has yet to build a strong presence in the USA, where only 12% of panellists stated that they used WhatsApp. 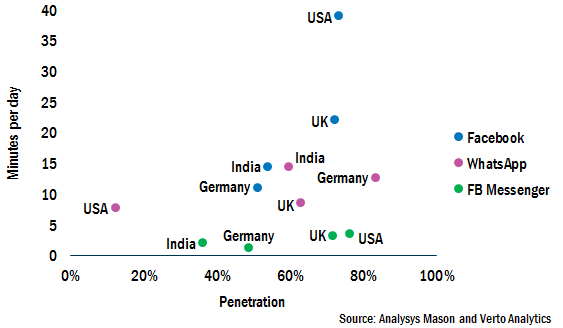 A notable result of the study is that the average usage for Facebook Messenger was relatively low for a communications app. It was used for just 3.2 minutes per day on average in the UK, and 3.5 minutes per day in the USA. This is less than half the time spent on WhatsApp, and usage is not growing; it is now around the same level that we observed when we ran the study in 2013. In our most recent study, we found that Messenger app users are launching the app regularly (because they must do so to read or send private messages from Facebook), but they are not staying in the app for very long.

These low usage levels pose a challenge for Facebook. Facebook continues to add features to its Messenger app, and the app forms the focus of developer and B2C efforts, with further initiatives unveiled at the F8 conference in April 2017. Facebook will need to successfully follow through with these initiatives if it is to capitalise on the scale of Messenger and realise its full potential as a platform. Facebook also owns WhatsApp, which has scale combined with impressive levels of engagement, but Facebook faces pressure from users to keep this service as a relatively 'clean' channel for communications. With little to no integration between the two services currently, it might appear that Facebook simply bought out a competitor when it acquired WhatsApp for USD19 billion in 2014. However, Facebook may not face the same pressures from users outside Europe and North America, and it may be able to adapt its strategy on a country or regional basis. For example, in India, where Messenger has a relatively low rate of penetration, Facebook has suggested that it will use WhatsApp to enable digital commerce.

Despite the strong position of all of Facebook's properties, the social and communications app market remains fragmented. Several apps have been successful at targeting market niches, particularly younger users (see Figure 2). For example, Snapchat was used by 62% of panellists aged 18 to 24 in the USA, but by only 12% of those aged 45 and older (in the UK, the proportions were 45% and 6%, respectively). Kik is also popular with those aged 18–24 years in the USA. Instagram was acquired by Facebook in 2012 and continues to occupy a strong position with younger users.

Figure 2: Penetration and average usage of selected social and communications apps for users aged 18 to 24 years, USA only (n = 548) 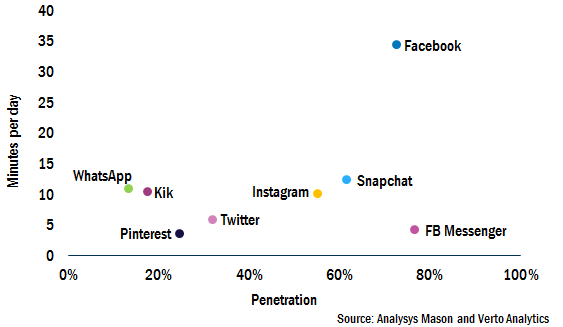 Instagram, Kik and Snapchat each have a significant presence among influential demographics. Kik's CEO Ted Livingston recently stated that the company is targeting younger users because that is where new behaviours are emerging. He wants the app to offer a 'cooler' alternative to Facebook and to challenge as a platform by shaping the behaviours of a new generation (on an app for a user base that doesn't include teachers and grandparents). Snapchat's focus has been on innovation around image sharing and multimedia, with recent moves into augmented reality (AR). These services tend to show relatively high-frequency engagement, as well as relatively high average usage. Snapchat, Instagram and Kik were all used on average for over 10 minutes per day by users aged 18–24 years in the USA. This is considerably higher than Facebook Messenger. The proportion of daily to monthly active users is 66%, 61% and 51% for Snapchat, Instagram and Kik, respectively.

Both Kik and Snapchat have innovated successfully, but Facebook can invest its considerable resources in the development of similar features. For example, Facebook announced several AR initiatives at its F8 event in April 2017. A 'me-too' approach may not be enough for Facebook to capture the attention of younger users, but this could be enough to secure its position as a default service for the mass market in Europe and North America. Alongside this is a recognition that Asia and the rest of the world are the main sources of user growth, and Facebook will need to target developers in these regions if Messenger and/or WhatsApp are to capitalise on scale to become the dominant platforms for a range of services.

For further information and insight into smartphone user behaviour, please register for Analysys Mason's forthcoming webinar  'What smartphone users really do', which will take place on Wednesday 10 May 2017 at 14:00 BST.

1 Our consumer smartphone analytics study analysed real-world usage data from 8408 smartphones in Germany, India, UK and USA. The study was conducted in August and September 2016 in association with Verto Analytics. We are publishing several reports on the findings.