"Operators should consider increasing their investments in emerging growth areas such as IoT, next-generation fixed networks and other business services to offset the considerable declines in legacy services."

Revenue growth in the South African enterprise market is weak, but there are a number of significant changes afoot. Legacy services are in rapid decline, the take-up of fixed broadband services is growing thanks to improved quality and affordability, and enterprises are increasing their use of IoT and other business services (such as cloud and security).

However, these changes are not leading to strong revenue growth for all operators. Legacy services still account for the majority of spend and their decline will have a considerable impact on overall market revenue growth. Enterprises will increase their spending on other business services, such as cloud and security, by over 7% each year. This will create a significant revenue growth opportunity, but we expect operators to receive only a slim portion of this growth and the market is relatively nascent.

The rapid developments of the market are also affecting the relative performance of the operators. Neotel Liquid Telecom’s and Vodacom’s enterprise businesses are growing, while the incumbents MTN and Telkom are struggling in the enterprise market. 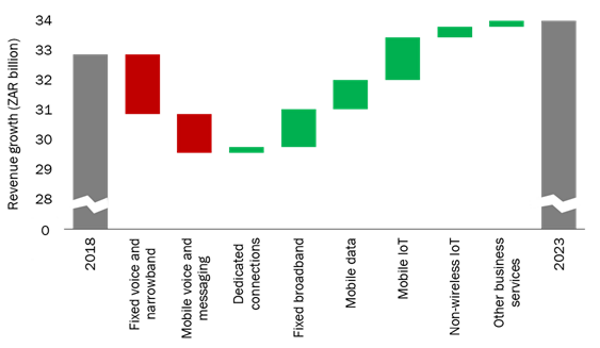 Revenue in the South African enterprise market will grow only marginally between 2018 and 2023 (by less than 1% each year), driven by several key, often contrasting, trends.

The number of fixed broadband connections to enterprises will increase by 7% each year and will reach over 600 000 by 2023. There will also be shifts in use of broadband technology: the number of FTTP/B connections will more than double to 100 000, and vDSL will replace ADSL as the most common broadband access type.

IoT and other business services will be the main drivers of overall revenue growth. We expect that the number of IoT devices on mobile networks will reach 29 million by 2023, resulting in connectivity revenue of almost ZAR3 billion (USD225 million) for operators. The market for other business services, such as cloud and security, will grow at CAGR of 7.4%, and will reach ZAR7 billion (USD 525 million) by 2023. 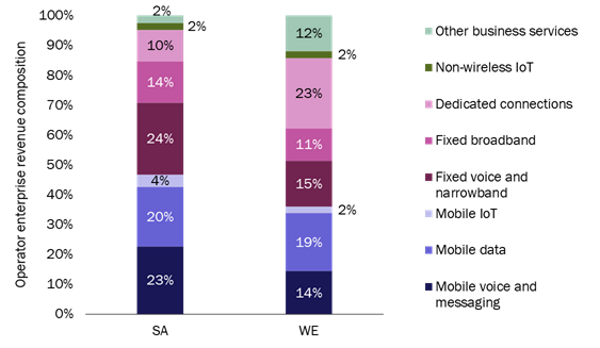 Operators in South Africa have already invested in areas not relating to traditional connectivity services. BCX generates almost 40% of its revenue from managed IT services. Vodacom’s acquisition of Stortech provides it with managed cloud services capabilities, and its subsidiary XLink, another acquisition, provides managed IoT solutions. MTN, Neotel Liquid Telecom and Vodacom have all increased their investments into data centres in order to capitalise on the potential in the cloud services market. Further acquisitions in the enterprise market by all operators in 2019 seem likely, as we have seen elsewhere.

Operators that are still highly dependent on revenue from legacy services face a considerable threat, but there are significant growth opportunities in fixed and mobile data services, IoT and other business services. Making the most of these opportunities will require investment. IoT, next-generation fixed networks and other businesses services will lead to considerable revenue growth in the enterprise market, but will also require operators to be bold and make the required investments in these markets.