"The majority of operators could do more to appeal to younger consumers; collaboration with players such as TikTok, while possibly short-lived, may yield positive results at minimal cost."

TikTok (known as Douyin in China) is a social video application launched in 2016 by the Chinese technology company ByteDance that enables users to create and share short-form videos with a duration of 15 seconds or less. The application has been downloaded more than 1.4 billion times and has approximately 700 million monthly active users, 200 million of which are outside China. It is particularly popular in Asia (including India), as well as in the USA and Turkey. ByteDance is valued at USD75 billion, which makes it the world's most-valuable unicorn.1

TikTok's success is attributed to its entertaining content, which is shared prolifically by users both on the TikTok platform itself and on other social media platforms. The app also has a powerful machine-learning-based recommendation engine that analyses users' behaviours and preferences to continuously optimise the stream of content. Its video creation functionality is another strength: users have access to sophisticated video editing features and also have access to a large catalogue of songs for inclusion in their videos, thanks to ByteDance's copyright agreements with major music industry companies.

TikTok generated 1.5% of global internet mobile downlink traffic, according to Sandvine's February 2019 Mobile Internet Phenomena Report.2 It ranked in eleventh place for data traffic worldwide and ninth place in Asia–Pacific (APAC). As such, operators should monitor its growth, and in countries where it has a significant user base, operators should consider app-specific network optimisation, which has been done before for applications such as Facebook and WeChat. As video consumption on mobile continues to grow, the quality of the video experience will become increasingly important, especially for operators that have neither strongly differentiating content nor particularly aggressive pricing.

TikTok is capturing an increasing share of younger users' screen time, and operators should therefore look for ways to take advantage of the app's popularity. Although mobile operators often find it difficult to directly monetise this kind of content, a rich mobile video proposition can potentially have other benefits including churn reduction, the ability to upsell consumers to higher-value plans, as well as market differentiation. One well-established strategy is zero-rating or assigning dedicated data allowances for the most-popular apps and content. For example, Telekom in Germany and KT in South Korea were among the first to zero-rate TikTok. Short-form video also aligns well with consumption habits in countries where data allowances remain limited and ByteDance is therefore a strong potential partner for mobile operators in emerging markets.

SK Telecom provides another example of how operators can leverage TikTok: the operator announced that the app will be available in high-definition (HD) video exclusively for 5G subscribers (720p instead of 480p for non-5G subscribers). While HD video can be enjoyed on a decent 4G connection, this partnership illustrates how operators can use marketing to create an association between an innovative and trendy service such as this and 5G, regardless of whether the service technically requires 5G or not. It is also an example of a service that can help 5G more than 5G helps it.

Operators have the opportunity to collaborate with TikTok on marketing and advertising campaigns. For example, Telkomsel in Indonesia conducted a TikTok campaign in September 2018 that aimed to encourage millennials to migrate from 3G to 4G. The operator used a combination of official challenges, hashtags, banners, stickers, songs and key influencers to generate engagement. The campaign resulted in the creation of 101 000 videos and over 13 million impressions. Traditional communication channels tend to be less relevant for targeting Generation Z and millennials, so instead, operators should consider using TikTok as a platform for advertising to these two demographics.

TikTok is trendy among teenagers, but operators should not underestimate usage among adults in some countries. According to Analysys Mason's 2019 Connected Consumer Survey, penetration of the app among adults with a smartphone was as high as 21% in Turkey, 11% in Taiwan and 10% in the Philippines. However the app's penetration among adults in Western Europe and Australia and New Zealand (ANZ), was much lower. While TikTok's penetration tends to be inversely correlated to the age of its users, this is not always the case. For example, we found that in Turkey, penetration was higher among the 25–34 age group than the 18–24 age group.

Figure 1: Penetration of TikTok in the smartphone-equipped adult population (aged 18–99) and among the 18–24 year-old age group, selected countries, 2019 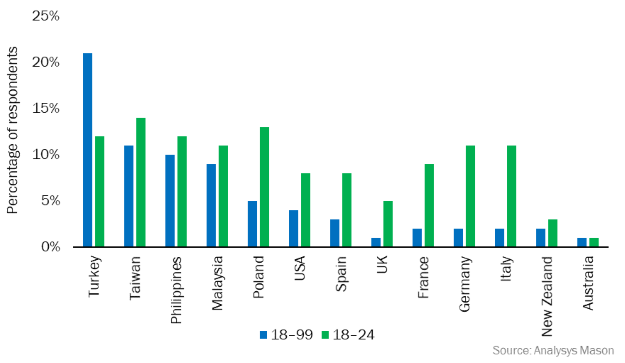 Partnerships may also extend offline. For example, SK Telecom announced in September 2019 that, in partnership with TikTok, it would transform some of its stores into 'TikTok zones', or physical locations where consumers can shoot their short clips. This is an astute way to create engagement and generate foot traffic in stores where users can also upgrade their phones and plans. Similar marketing strategies have been employed in the past: for example, the Pokémon Go game was used by operators such as Jio, SK Telecom and Sprint to transform their stores into locations to stop and play the game.

TikTok is not the first app to create a buzz, and its long-term success is far from guaranteed. In particular, it is unclear if ByteDance will manage to monetise its user base outside China and prevent it from churning to the next cool app. Operators should also be aware of the bad publicity that has surrounded ByteDance in various countries (in terms of the collection of personal data from underage users in the USA, and inappropriate content in India, for example), but these challenges are not unique to TikTok, and TikTok has addressed many of these issues.

A majority of operators could do more when it comes to brand association and appealing to younger consumers. Collaboration with players such as TikTok, while possibly short-lived, may yield positive results for operators at minimal cost.

1 The term ‘unicorn’ refers in this context to a technology start-up company that has reached a valuation of over USD1 billion following private investment.

COVID-19 will accelerate the democratisation of e-sports