"M&A may prove to be a simpler route to the main desired effect of digital transformation: cost-cutting."

Vodafone confirmed on 5 February 2018 that it was in talks to acquire Liberty Global assets in Europe. The talks appear to exclude Virgin Media (Liberty Global’s main provider in the UK and Ireland). At the time of writing, it looks as if any deals will happen on a country-by-country basis, and that there is no question of a full merger, or of any market-by-market mergers such as the Vodafone–Ziggo merger in the Netherlands. No deals have been reached yet, so this comment is a discussion of the logic and implications of further fixed acquisitions by Vodafone in Europe.

Vodafone wants to be the leader in European convergence

Vodafone’s long-term strategy is to be the only European-level competitor to the incumbents that is of a similar size, in both fixed and mobile, and to have the highest number of fixed–mobile convergence (FMC) accounts in Europe (an ambition shared with Deutsche Telekom and Orange). In 3Q 2017, it was only the fourth (see Figure 1). The acquisition of non-UK/Ireland businesses should propel it to number two. 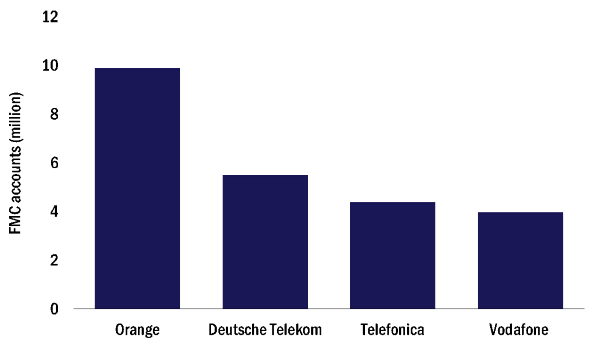 Vodafone already has a 10.3% revenue share of European1 mass-market services: mobile, broadband, fixed voice and pay TV (that is, all services excluding enterprise/ICT); this is the largest of any operator. Combining all of Vodafone’s and Liberty Global’s European assets would make Vodafone nearly 60% larger than its nearest rival, Deutsche Telekom. The UK and Ireland are not part of current talks. In continental Europe, Vodafone is currently number three in revenue, but the acquisition of Liberty Global businesses there would propel it to number one.

More importantly, at least in the short term, it would be number two in terms of revenue in eight countries, including Germany, Italy and Spain (nine if the existing joint-venture between Vodafone and Ziggo in the Netherlands is included) (see Figure 2). If the Irish business were included (it does not look as if it will be, although until very recently this was a UPC business and not part of Virgin Media), Vodafone would become the largest operator in Ireland.

In fact, this analysis somewhat understates the potential pre-eminence of Vodafone. We see Europe as essentially three differently sized but largely discrete markets. 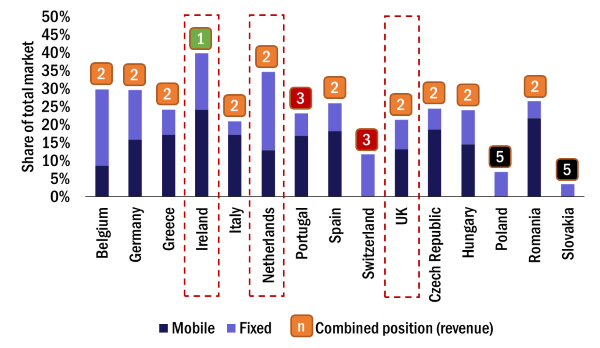 Acquisition provides a simple route to where Vodafone wants to be

There are a host of good reasons why combinations of Vodafone and Liberty Global businesses make sense.

There are potential downsides to M&A

While we see great potential benefits to combining the businesses, there are risks.

If the UK businesses are not part of any deals, it clears the way for other M&A

At the time of writing, Liberty Global’s UK/Ireland business, Virgin Media, was not part of the discussions between Vodafone and Liberty Global. If there is no acquisition (either way) between Virgin Media and Vodafone UK, the UK will remain with O2, Three and Vodafone as mobile-centric businesses,2 and Virgin Media, Sky and TalkTalk as fixed-centric businesses. This looks increasingly odd in a world with a decreasing number of mobile or fixed pure-plays. Indeed, we have already speculated that Sky will have no long-term reason to hang on to its broadband and mobile businesses.

If a Vodafone–Virgin Media deal does not materialise, then Vodafone buying Sky’s telecoms business would make sense as a way to bulk up Vodafone’s tiny UK broadband share (1.2%), possibly with a cross-selling partnership between Vodafone and Sky. Additionally, O2 is always potentially up for sale. As such, Liberty Global could acquire O2 with the proceeds from a European sell-off.

2Vodafone’s recent agreement with CityFibre for FTTH would be unaffected.