Tom Rebbeck, Research Director at Analysys Mason and Head of the Enterprise and IoT research programme, and Michele Mackenzie, Principal Analyst discuss the operator opportunities in the autonomous cars market.

Introduction: Hello, my name is Michele Mackenzie and I am Principal Analyst at Analysys Mason. I am here today with Tom Rebbeck, Research Director who is going to talk about some research he has done into autonomous cars.

Tom: I think first of all we need to think about how autonomous cars or autonomous vehicles work, thinking about the experimental autonomous cars today. So essentially those vehicles have a very detailed map, up to 10cm mapping, of an area and then they have sensors on the vehicle so lidar, optical radar and so on, that create a very detailed picture and then they compare what they have in their map with those sensors and if they see what they are expecting to see they proceed and if there are anomalies then they take whatever action is necessary. The point of all of that is that this is all done on the car itself, there is lots of processing on the car so it needs very high-performance processors but not necessarily connecting with the network.

Michele: To what extent does this involve the telecoms network?

Tom: The telecoms networks are used to update the information on the car – updates of the software, updating the very detailed mapping, traffic information and so on but the car does not rely on the telecoms network for any real-time information. And if you think about it, that makes sense. Even if you have a perfect connection for lets say 99% of the time, that would mean if you are travelling 100km then for 1km you don't have any connection and you are not going to rely on that. So anything from a telecoms network – whether its the standard cellular that we have today or some sort of V2X solution in future is going to supplement the onboard processing but not replace it.

Michele: In the piece you talk about Intel's estimates for autonomous cars.

Tom: Yes, back in November 2016 Intel published an interesting blog post looking at the quantity of data that would be produced by autonomous vehicles and it suggested that each autonomous vehicle would generate 4TB of data each day. There's a link to that in my article. That 4TB of data a day we need to treat with some caution. Intel does not provide the details of how they generated that number, but from some of the information, the input assumptions and so on, it looks as though they are assuming that a car is driving for 15 hours a day at least – that may be reasonable for an autonomous Uber but not for a typical car.

Probably more important than the number of hours a car is driving is we need to be clear about exactly what Intel is talking about. The 4TB that they reference is the total volume of data that the vehicle generates – so the information from all the different sensors – lidar, radar, optical and so on, that is generating those 4TB. Once that information has been processed, as soon as the vehicle has seen what it was expecting to and drives on, that information, that data, has no real value so most of that will be discarded.

For Intel and other chip vendors, all of that data processing means lots of demand for high performance processing chips. For telecoms operators though, will only see a tiny fraction of this data. It is hard to know exactly how much. When I interviewed people asking them to guess nobody really had a good figure of it. But it could be that just let's say 0.1% of the total amount of data that a car generates need to be shared with the network and if you are talking about a typical car that is driven for an hour a day, then we are talking about 250 megabytes of data, or a few gigabytes of data a month, roughly equivalent to a typical smartphone in the US.

Michele: So the impact on telecoms operators on the systems driving autonomous vehicles may be limited, but what about the passengers?

Tom: That is where it gets more interesting. With an autonomous vehicle, obviously there is nobody driving it anymore – the driver becomes a passenger with time on their hands, and if you look at stats on journeys the majority of car journeys today only have one person in the car. That might open up new opportunities, perhaps for watching films or listening to music, or maybe even for new types of augmented reality that merge the scenery outside the car with some gaming aspect, all of which could mean greater demand for telecoms operators.

It's difficult to put a number against that– autonomous vehicles are likely to change the way we use vehicles but if you look at some of the data volumes for streaming video, if you are streaming video for half an hour that generates more than 1GB of data that could generate substantial demand for telecoms operators.

Michele: Finally, what is the timescale for all of this?

Tom: Long. Full autonomy is probably not be available until well in the next decade and even when fully autonomous vehicles are available it's going to take time to penetrate the base. If you assume a similar replacement rate of vehicles today, where each year around 7% of cars are replaced, it could be 2035 until half the cars on the road are autonomous. Now, all of that could happen faster – for example through retrofitting, government regulation or if each autonomous car replaces multiple vehicles, so if lots of people get rid of their car and just use Uber it could happen more quickly but even so, it seems unlikely that this will have much of an impact until the latter half of the 2020s. We may be well quite far advanced with 6G before autonomous vehicles will have much of an impact.

Michele: And where can we find more information on this?

Tom: We have published a couple pieces – there is an article on our website that we mentioned and a longer report that is available to our subscribers. If you search on the Analysys Mason website for "autonomous vehicles" you are can find links to both of these.

Article: Autonomous vehicles: entertaining passengers may be the big opportunity for telecoms operators 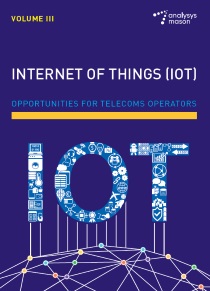 Our third collection of articles that explore how telecoms operators can make the most of the IoT opportunity.