"The increasing prevalence of FMC plays at the low-ARPA end of the market will force integrated operators to re-evaluate their own strategies."

Fixed–mobile convergence (FMC) plans are becoming increasingly popular in almost every country in which they are available, though both the extent of their popularity and the form that they take are dictated by the level of market competition and operator infrastructure ownership. An increase in wholesale fibre market competition and in the amount of M&A activity will lead to growth in the penetration of FMC offers (see Figure 1). In this article, we present analysis from Analysys Mason’s latest FMC forecast, which models 19 countries individually.

Figure 1: FMC accounts as a percentage of the number of fixed broadband connections, selected countries, 2021 and 2026 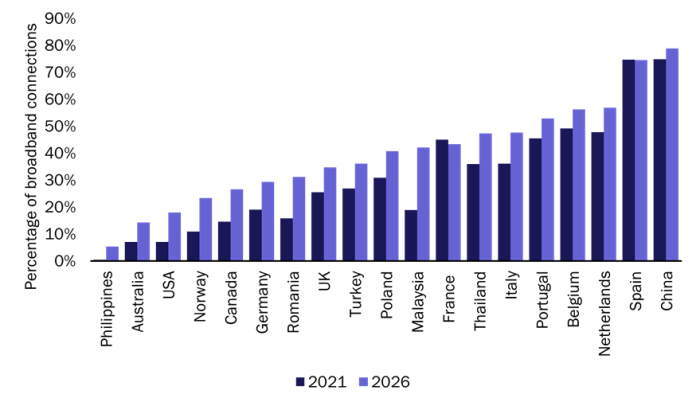 European markets can be split into four groups

The countries in Europe can be split into four groups based on the state of their FMC markets.

FMC penetration is high in Thailand and China, and has been driven by growth in the take-up of FTTP. The merger between True and mobile player dtac in Thailand will place further pressure on AIS. AIS may therefore increase its FMC discounts to insulate itself, thereby leading to a further increase in the number of FMC accounts in Thailand.

All of the major MNOs in Malaysia have used FMC discounts to enter the fixed market due to improving wholesale broadband access rates and concerns around the viability of a cellular-only approach. The FMC market in the Philippines remains nascent, but the large integrated players will start to push FMC bundles following pressure from fixed and mobile challengers.

We have added Canada and the USA to our forecasts this year due to the increasing prevalence of FMC in these markets. Historically, operators in these countries have relied on mobile-only and fixed-only bundling strategies to mitigate churn. However, the two largest cablecos in the USA have recently joined the mobile market, and fixed broadband challengers such as Verizon will look to win fixed broadband market share by offering FMC discounts. The FMC share of broadband connections has grown significantly in Canada in recent years, and the merger between Rogers and Shaw should cause the integrated operators in the country to further increase their FMC discounts.

The number of standalone operators continues to decline in most markets as further mergers between fixed-only and mobile-only operators occur. These mergers have largely been successful, and operators have been able to realise significant cost synergies.1 These deals also allow the newly integrated operators to put pressure on the remaining standalone players in the market due to improved cross-selling opportunities and falling churn rates among their integrated bases.

The increasing prevalence of FMC plays at the low-ARPA end of the market will force integrated operators to re-evaluate their own strategies. They will increasingly have to address the low-ARPA end of the market and add further flexibility to their FMC bundles. This will mean that the amount of pay-TV bundling in FMC plans will decline in many markets, and cross-selling multiple SIMs into plans will become a key means of building ARPA. Indeed, the number of SIMs per FMC account is significantly below the average number of people per household in most countries, which suggests that there is an opportunity here.

As COP27 closes, CSPs can help consumers to address concerns about both the cost of living and the environment

Where will service revenue growth come from?