Operators may be facing a two-step decline in business revenue, but they are not powerless to respond


"Hopes that 2Q 2020 was the low point for business revenue may be unfounded, but operators can take actions to improve their situation."

Telecoms operators were expecting their business divisions to perform poorly in 2Q 2020 but the results were better than feared. Incumbent operators in North America and Western Europe report that their business revenue fell by around 5% in 2Q 2020 compared to the same period a year before; bad, but not catastrophic.

Hopes that 2Q 2020 – with massive disruption caused by lockdowns and limited economic activity – would be the low point for business revenue appear optimistic, however. Operators may be in for a two-step decline in revenue with further falls to come later in 2020.

The declines in 2Q were mostly due to reductions in usage, and not in the subscriber base. As 2020 progresses, and more companies are forced out of business, operators may face declines in both usage and the subscriber base. Financial results for business divisions may get worse before they get better. Operators are not powerless though and can take measures to improve the situation.

Mobile service revenue gives the best picture of what is happening

Operator business revenue is generated by a variety of sources – fixed services, mobile services, IT projects, sales of equipment and so on. Detailed reporting on these different categories is only available from a handful of operators, but the data we can see from Northern European operators plus Verizon is enough to form a clear picture. Mobile service revenue in particular is revealing.

Figure 1 shows three measures for the operators that provide this detail. 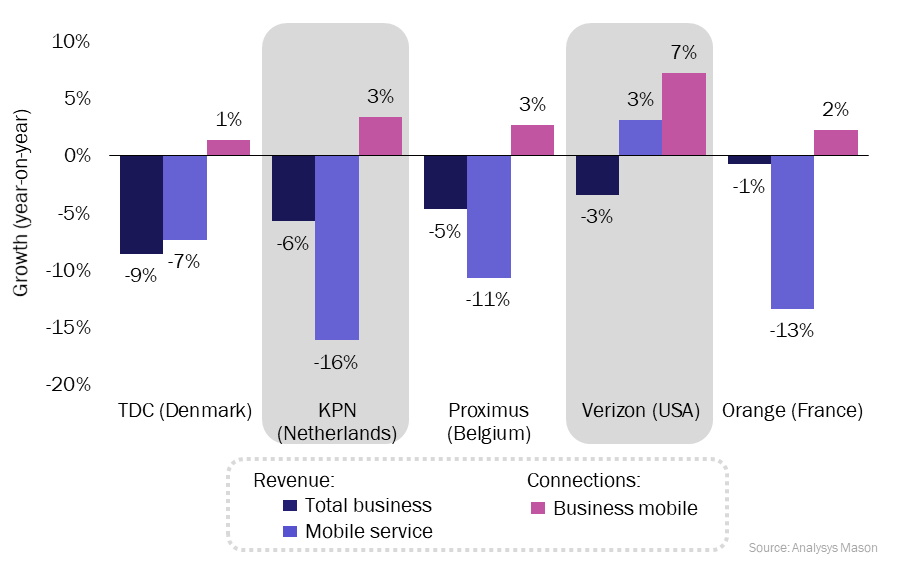 Taking the three data series shown in the chart in turn.

Overall, the number of business subscribers is increasing, but revenue per subscriber is falling so quickly as to turn the overall mobile service revenue negative.

Fixed service revenue results were mixed across the operators that break these out. It declined for most operators, but at a rate that was inline with previous declines, mostly due to long-term trends in the voice market. Fixed revenue is less usage dependent than mobile and so is less susceptible to short-term changes.

The reduction in business revenue is coming before we see any significant increase in the number of bankruptcies. Announcements of redundancies are widespread, but according to data from TradingEconomics, the number of bankruptcies in the countries in question (that is Belgium, Denmark, France, Netherlands and the USA) is around the historic average, no doubt supported by government funding (Belgium put a freeze on bankruptcies between March and May 2020). As government funding is removed, a wave of bankruptcies and other business closures seems inevitable. This will have a negative impact on fixed and mobile service revenue, as subscriber numbers will fall and the remaining subscribers will continue to have lower usage levels.

Operators can take steps to improve the situation

Operators seem to have limited room for manoeuvre. They have already provided some limited support for businesses. Core connectivity revenue has been under pressure for many years, especially for incumbent operators that are at risk of losing share. ICT revenue continues to perform strongly (it grew by 2.3% for Proximus and by 4.1% for Orange3 in 2Q 2020 compared to 2019) and generated a large share of business revenue (38% for Proxmius and 40% for Orange) but this has come after sustained long-term investment, including acquisitions.

Operators are not powerless and, while there is much that they cannot change about the current situation, they can focus on the areas where they do have influence. For example, they can do more to help companies that have a large share of employees at home (as we outlined in our recent report Remote working solutions: options for operators). The flexibility of 5G fixed-wireless access (FWA) can be promoted to companies that are facing uncertainties (see our article on positioning these offers). The increased emphasis and accelerated take-up of unified communications solutions is another opportunity (see our recent report Operator approaches to unified communications: ten case studies and associated article). Spend on security is also likely to increase in response to the changing working environment (as we explored in this piece); again, this is an area that operators are well placed to address.

3 IT and integration services in Orange’s reporting.