5G will account for 22% of mobile subscribers worldwide in 2024


"The 5G device market is maturing rapidly, but lengthening replacement cycles will hinder the take-up of 5G services."

The first mobile 5G services were launched in April 2019 by the three South Korean operators, followed closely by Verizon in the USA. The first 5G handsets became widely available in mid-2019 and operators in other regions, including Europe and the Middle East, also launched mobile 5G services. Chinese operators launched at scale in November 2019. By the end of the year, 50 operators had launched services in 27 countries, with most offering mobile services. 5G gathered momentum in 2019 to a degree that seemed unlikely a year or two ago. This comment provides our outlook for the adoption of mobile 5G services, including a discussion of how we expect take-up to be different from that of previous technology generations.

Our 5G forecast models the interaction between two critical factors for 5G take-up after service launch – the availability of 5G-capable devices (and crucially their affordability); and 5G network coverage (for which access to suitable spectrum is the critical factor). Both of these factors vary significantly between different countries and regions, and accordingly we expect very different take-up rates for 5G services. 2020 marks the year in which 5G becomes well established and we expect the number of 5G mobile connections to surpass 100 million by the end of the year. Although this accounts for less than 1.5% of mobile connections worldwide, take-up will be skewed towards certain regions.

Operators in North America and Asia–Pacific have made much of the early running with 5G, and these regions together will account for over 85% of 5G connections at the end of 2020. South Korea in particular has been a pioneer, aided by government investment, the early release of suitable spectrum, and close co-operation between the three national MNOs and local device and equipment manufacturers, notably Samsung. By November 2019, over 6% of mobile connections were using 5G – well ahead of any other country.

Among other developed regions, despite some early network launches in countries such as Italy, Spain, and the UK, take-up in Western Europe will lag behind that in North America and developed Asia–Pacific. The lack of availability of spectrum is causing a bottleneck in some countries, and network roll-out in Europe is likely to be slower than in other developed regions.

The device market varies by region, which has important consequences for the rate of 5G take-up. Compared with North America, smartphone replacement cycles are significantly slower in Europe. The distribution of smartphone sales by price band is also more skewed towards the lower end in Europe. Both these factors will cause slower penetration of 5G into the device base. Countries with a higher share of iOS devices are also likely to have slower growth initially, because the first 5G-capable iPhones are not expected until late in 2020.

5G will account for more than 50% of active mobile connections in North America and developed Asia–Pacific by 2024, while emerging markets will lag behind significantly, particularly Sub-Saharan Africa where only South Africa will launch services before 2021 (see Figure 1). 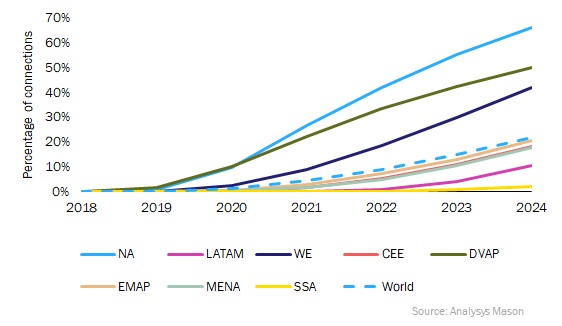 An important reference point for the adoption of 5G mobile is the adoption of 4G services, which were deployed across most developed markets between 2010 and 2013. There are some important differences to consider when relating the industry's experiences with 4G to the forecast period for 5G. These relate to both demand-side and supply-side issues and push in both directions to hinder demand but stimulate supply in comparison with 4G.

5G has an 'experience premium' over 4G, but it is less pronounced than it was for 4G over 3G. When 4G was launched in 2010, HSPA+ was theoretically capable of 28Mbit/s but the real-world performance for services such as video was poor. LTE networks have improved markedly since their launch, and are getting better. Some LTE-A services are marketed as offering 300Mbit/s. A more typical average download speed of 20Mbit/s is fine for most things, with caveats around congestion and peak times, and is sufficient to handle 4k video (which needs around 15Mbit/s). New use cases such as cloud gaming are expected to push the performance requirements of mobile networks but they are not currently driving the market to the extent that video drove 4G.

5G is coming to market much later in the smartphone adoption curve than 4G. Smartphone penetration levels are much higher now and device replacement cycles are lengthening. This of course varies by region and will play out very differently in Asia compared to Europe. Smartphone penetration when EE launched 4G in the UK in 2012 was 58% of population. It is now well over 100%. Smartphone sales are in decline. 5G is expected to act as a bit of a boost, but it is working against the long-term trend.

Despite the maturity of the smartphone market, it has changed significantly during the past decade, notably with the rise of Chinese vendors such as Huawei, Oppo and Xiaomi. These original equipment manufacturers (OEMs) have successfully targeted the mid-range market with quality devices and are set to build on this with 5G. The large-scale launch of mobile 5G services in China in November 2019 will be a significant boost here, driving the ecosystem around devices supporting 2.6GHz and 3.5GHz frequencies. As a result, we expect the prices for 5G handsets to fall faster than their 4G equivalents. Huawei is targeting a USD250 handset by the end of 2020. Xiaomi has said that it will introduce at least 10 5G handsets to its range in 2020.

Handset replacement rates may be lower than they were for 4G, but 5G handsets are expected to account for a larger proportion of operators' device portfolios more quickly.