The increased spending on submarine networks by companies such as Facebook and Google will create opportunities for Africa-based operators to enhance their own services and grow their revenue. However, there are several barriers that local operators must overcome to reap the full benefits of these new networks. This comment provides an analysis of these factors and strategic recommendations for operators based on our report, Submarine cables: opportunities for operators in Africa.

Investments in submarine cables are soaring

There has been renewed interest in submarine cables in the past few years and the number of new cables deployed worldwide has increased significantly. The increase in network traffic has been driving this trend. Hyperscale companies such as Amazon, Facebook and Google are responsible for much of the new spending, and the rate at which they are investing in this market is increasing. Google announced its latest cable, named Grace Hopper, in July 2020; this is its fifteenth undersea cable investment and its fourth to be fully owned.

The increase in the number of submarine investments has been particularly significant in Africa. The continent has so far been largely underserved by content distribution networks (CDNs) and has suffered from poor network coverage. This, in turn, limits revenue opportunities for operators. Companies such as Facebook and Google are leading these investments, alongside traditional players such as wholesale internet and voice operators.

Facebook and Google are the main investors in two major projects that are currently underway in Africa. These are:

Submarine cable networks can enhance connectivity and lower its costs. However, the deployment of these cables requires co-ordination and very large investments, and African operators have not always been able to reap the full benefits. They have been constrained by poor inland network coverage, a lack of regulation and their limited ability to invest.

As a result, Africa is still underserved and has higher costs for connectivity than developed regions, despite the fall in the cost per gigabit due to the deployment of a large number of submarine cables in the region during 2009–2012 (Figure 1).

Figure 1: Cost of a 1GB mobile broadband plan as a percentage of gross national income (GNI) per capita, North America, Africa and Europe, 2013–2019 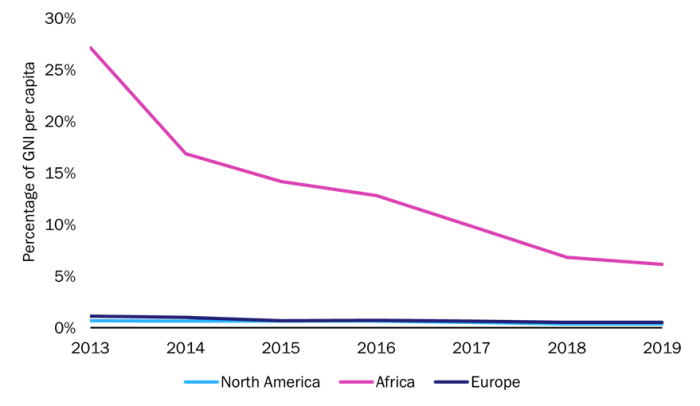 Africa-based operators often lack the funds to invest significantly in submarine projects, and this has created conflicts of interest between large and small shareholders in the past. African operators have also struggled to gain access to submarine cable capacity, which has historically been restricted, often because a lack of regulation resulted in cable access monopolies. Furthermore, operators in landlocked regions with no direct access to cables had to form access agreements with those in other regions and ended up paying very high prices. As a result, many operators were not able to enjoy the benefits that new international cables should have provided.

The increased investment in submarine cables that serve Africa gives operators in the region an opportunity to enhance their business models and improve their services. They should consider the following three strategies in order to exploit this opportunity.

Further opportunities will arise for Africa-based operators as the traffic per user and internet penetration increase. Local operators should be more proactive in taking a major role in submarine investments, helped by new stakeholder models. The consortium that finances the Djibouti Africa Regional Express 1 (DARE1) submarine cable is an example of such a model. This group is made up of Djibouti Telecom, Hormuud Telecom, Somtel and Telkom Kenya (Telkom Kenya is the landing party in Kenya). All of the members of this consortium are Africa-based operators; it is the first of its kind for the continent and it represents a huge step for African operators because it gives them more control over decisions about local connectivity, co-location hubs and gateways into other regions. This, in turn, will create opportunities for CDN and over-the-top providers in the region; it will give them more negotiating power when entering into partnerships with larger connectivity providers.