"Monitoring technologies such as OpenTracing were not originally designed for instrumenting the cloud-native 5G core and some level of standardisation and adaptation will therefore be required to make them fit for purpose."

Webscale companies such as Amazon, Facebook, Google and Microsoft are leading the way in software innovation and are creating some of the major trends that are being embraced by enterprises and communications service providers (CSPs). Chief among them are the adoption of open-source technologies for software engineering and the move to an analytics-driven platform approach to infrastructure and service operations.

CSPs have a history of deploying open-source software such as Linux within their IT functions. However, open-source software is expected to play a more-central role as CSPs embark on digital transformation initiatives around network virtualisation, containerisation and operations automation in order to increase service agility and transform opex economics.

The Linux Networking Foundation is leading a plethora of industry initiatives such as ONAP, FD.io, OPNFV, Open Daylight and Tungsten Fabric, and is also collaborating with other industry initiatives such as the Cloud-Native Computing Foundation (CNCF), ETSI, LF Edge, ONF and O-RAN Alliance to drive the adoption of open-source software natively within networks (as container network functions (CNFs)) and network automation platforms.

The telecoms industry is coalescing around the Kubernetes ecosystem

Cloud-native architecture is a requirement not only for 5G networks, but also for the applications deployed on top of those networks. CSPs need to fully understand this architecture, which is characterised by containerised applications composed of microservices. Microservices-based applications are deployed and orchestrated by Kubernetes (K8s), an abstraction layer that permits the portability of containers across different infrastructure and facilitates an unprecedented level of service scalability and automation.

The software stack is formed from the container management layer (CaaS) and a pool of reusable, common components that developers can access when building applications (PaaS). These microservices can be classified into three following categories (Figure 1). 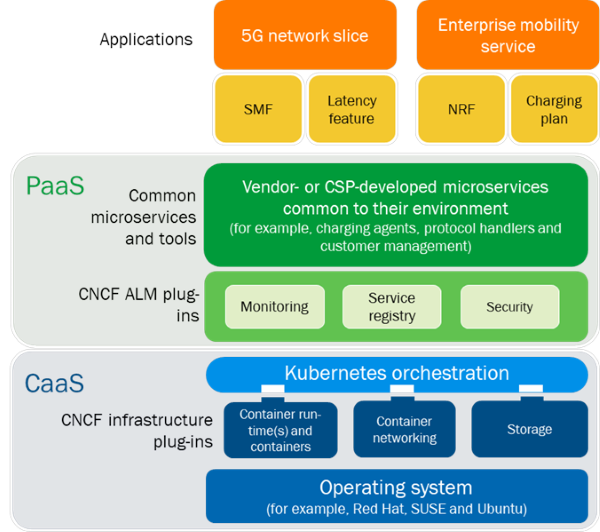 Traditional assurance systems were developed as closed, full-stack, purpose-built solutions that use predefined structured data sources such as offline SNMP data (for example, with a 15-minute delay), passive packet data or active test data, with limited or no ability to ingest third-party data sources. Operationalisation and automation of dynamic cloud-native networks calls for new assurance capabilities that can provide granular, real-time performance data with deep infrastructure and network visibility to rapidly respond to (and even pre-empt) performance degradations in the various layers of the networking stack, the service layer and the application.

To achieve this in best of breed cloud-native networks, where the infrastructure, network functions and applications can be sourced from different vendors, assurance systems must:

An open assurance platform enables the easy ingestion of new data sources such as streaming network telemetry and OpenTracing data from the cloud-native stack. Together, these data sources can increase the accuracy of the contextual insights that can be consumed by a plethora of adjunct operational systems (such as network and service orchestration systems) in order to enable the closed-loop lifecycle automation of critical 5G services (Figure 2).

Figure 2: Example of a cloud-native and open automated assurance platform 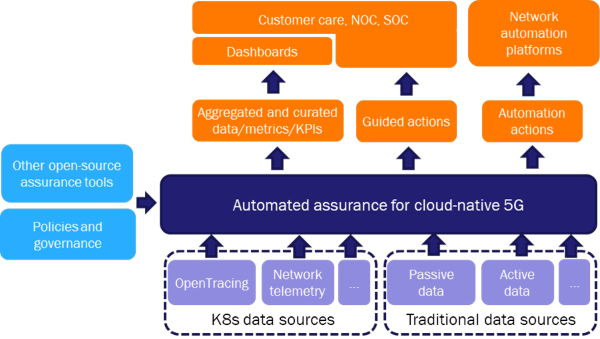 The OpenTracing project that is being incubated by the CNCF provides vendor-neutral APIs and instrumentation for distributed tracing in Kubernetes environments and could be used in the cloud-native 5G core. However, this technology was not originally designed for instrumentation in the cloud-native 5G core and therefore, some enhancements and adaptations will be required to make it fit-for-purpose and conducive for 5G core assurance. Some examples of these adaptations are as follows.

These issues highlight the need for the standardisation of open-source APIs such as OpenTracing to make it easier for the vendors that are developing 5G and assurance products and solutions. Some of the standards definition bodies (for example, TMF Open APIs and Open Data Alliance) must introduce interface and event stream format definitions for the OpenTracing APIs.

vRAN: the high-level implications for OSS