"Established CMP vendors should address operators' concerns over the high cost and the lack of flexibility of their platforms in order to maintain their position as primary suppliers."

Connectivity management platforms (CMPs) enable operators (and their enterprise customers) to manage their connectivity subscriptions and monitor their IoT estates. We forecast that 90% of all IoT connections will be managed through a CMP by 2028 (up from 75% in 2019). This will generate USD845 million in revenue for CMP vendors such as Cisco and Ericsson.

Analysys Mason forecasts that the number of IoT connections managed by CMPs will grow at a CAGR of 24% between 2019 and 2028 to reach 4.8 billion (Figure 1). Further details of this forecast can be found in the report, IoT forecast: connectivity management platforms 2019–2028. 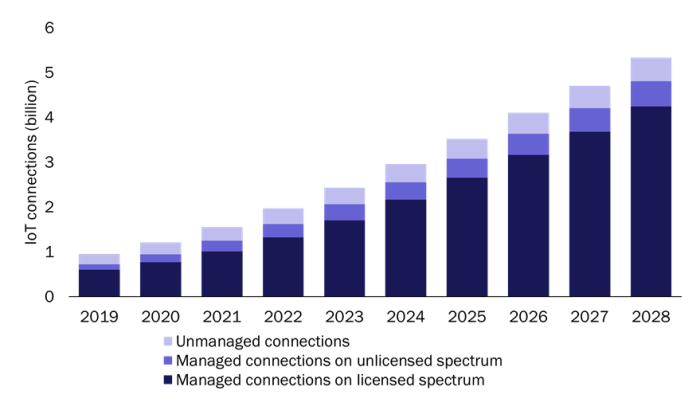 The expansion of the CMP market will be driven by the rapid growth in the number of IoT connections and enterprises’ growing need to keep track of connectivity contracts, optimise data usage and integrate billing and traffic data with their back-end systems.

We forecast that 90% of IoT connections worldwide will be managed by CMPs by 2028 (up from 75% in 2019). Our IoT platform contract tracker lists more than 200 platform deals that have been signed by operators and involve connectivity management functions. A further 12 operators have developed their own CMPs.

Large operators are increasingly favouring their proprietary platforms, but vendors will maintain a sizeable share of the CMP market

Most operators use a combination of CMPs to avoid vendor lock-in, ensure commercial flexibility and satisfy certain use case requirements (for example, providing global connectivity). However, our interviews suggest that some large operators (such as Deutsche Telekom, Orange and Telefónica) have also been improving their proprietary CMPs and reducing their dependency on platform vendors.

Overall, we think that large operators’ shift to proprietary solutions will outweigh smaller operators’ use of third-party solutions. Indeed, we forecast that the proportion of managed connections that will be managed using vendors’ CMPs will decrease from 61% in 2019 to 45% in 2028. However, the total spend on third-party CMPs will continue to grow because the rapid growth in the number of IoT connections will offset the decrease in spending on third-party CMPs caused by competition and vendors’ falling market shares. As such, there remains a significant opportunity for vendors; they may be able to generate a total of USD845 million in revenue from CMPs by 2028, 2.5 times more than that in 2019.

The CMP market is concentrated and dominated by several large providers (Figure 2). Cisco and Ericsson gained an early-mover advantage, and Huawei and Whale Cloud emerged as strong contenders thanks to their partnership with Chinese mobile operators. More than 82% of IoT connections that use licensed spectrum and are managed by third-party CMPs are managed by the platforms of these four vendors as of 2020.

Figure 2: Market shares of IoT connections that use licensed spectrum and are managed by third-party CMPs, worldwide, 2020 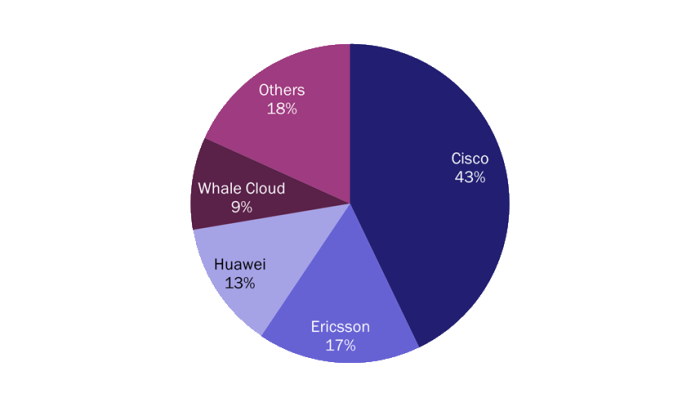 Large vendors need to assess their offerings and ensure that their platforms continue to address operators’ evolving requirements if they are to maintain their position as primary platform suppliers. Cisco and Ericsson have already invested in new platform features (such as adding device management and eSIM support). They have also capitalised on their relationships with enterprises and their ecosystem partners to enable operators to deliver specific IoT solutions and to provide support for IoT sales and marketing efforts.

Large vendors should do more to address concerns regarding high costs and a lack of flexibility by offering a wider range of pricing models and more-customisable propositions. They should also demonstrate that they can effectively support the requirements (and challenges) related to the deployment of new IoT use cases (that use NB-IoT and 5G, for example) and that they can help operators to generate more revenue from IoT.