MVNOs in DVAP have opportunities to grow, but regulators’ efforts to help have not always succeeded


"There are a number of ways that MVNOs can increase their market share in the DVAP region, including offering their customers no-frills, SIM-only plans."

Stakeholders in mobile markets across developed Asia–Pacific (DVAP) are reviewing the role that MVNOs can play in the mobile market landscape. MNOs, regulators and MVNOs themselves must consider whether niche opportunities remain for MVNOs to address. Regulators must also assess the impact that MVNO growth may have on overall mobile market competition and evaluate whether the measures that they have implemented to facilitate MVNO growth have been effective. This article, which complements our recently published MVNOs in developed Asia–Pacific: case studies and analysis, analyses the current state of, and future prospects for, the MVNO market in the DVAP region.

MVNOs' subscriber and revenue market share in the DVAP region has, in general, grown in recent years, although this growth has slowed more recently in some cases (see Figure 1). New Zealand and Taiwan are the only two markets in DVAP where MVNOs did not achieve at least a 2.5% share of active SIMs at the end of 2018. 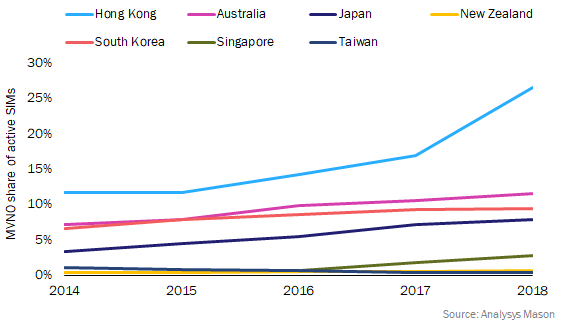 Some MVNOs in DVAP, such as circles.life in Singapore, have increased their market share in the last 3 years by offering no-frills, SIM-only plans. The growth experienced by such MVNOs is occurring at the same time as consumer interest in subsidised smartphones wanes and as smartphone replacement cycles lengthen. Declining interest in subsidised smartphones can help smaller MVNOs with lower purchasing power than MNOs to procure handsets.

MVNOs may also be able to target consumers that want a refurbished handset rather than a new, more-expensive, subsidised model. For example, Australian investment bank and financial services company Macquarie Group plans to launch the Nu Mobile MVNO on Telstra's network. Macquarie Group is in a position to launch such an MVNO because it already leases handsets to retailers, which must be returned by consumers when the device's lease expires. This means that Macquarie Group has a stock of used handsets for its MVNO business.

Some MNOs in DVAP may prefer to launch their own sub-brands to cater for the increasing consumer demand for SIM-only plans. However, if they feel that they lack the resources to launch their own sub-brands, MNOs can instead host MVNOs that cater to this demand. M1 in Singapore is one example of an MNO that has increased its postpaid subscriber market share and its revenue market share by hosting MVNO circles.life.

Future competition may also emerge from online retailers that launch MVNOs. For example, Rakuten Mobile in Japan and Kogan Mobile in Australia (which is technically not an MVNO because it uses a commission-based agreement with host operator Vodafone) have both seen strong growth in subscriber numbers in the last 3 years. The wider Rakuten group has a loyalty scheme, and points that are accrued from this scheme from ecommerce purchases can be used to pay for Rakuten Mobile bills. Rakuten has reported that the rate of churn for those paying for mobile services with these points is less than half that of other subscribers. Such MVNOs have the potential to assist host MNOs, and the growth in Kogan Mobile has helped Vodafone gain subscriber and revenue market share in 2018 in Australia.

MVNO growth can increase mobile market competition, but regulation to encourage this growth may not always be successful

Regulators in Japan and South Korea have sought to encourage growth in the MVNO sector as a way of increasing competition and reducing prices in the mobile market. Regulators in both markets have attempted to place limits on handset subsidies. This is because, in theory, high handset subsidies favour larger MNOs with greater purchasing power than smaller MNOs. In Japan, MVNO competition has been encouraged by regulatory changes introduced in 2015, which prevents SIM locking of devices purchased from MNOs. However, it is not clear whether MVNO subscriber and revenue growth is sustainable in either market, or if MVNO growth has helped to lower mobile prices.

Analysys Mason estimates that MVNO subscriber market share in Japan grew from 2.6% at the end of 2013 to 8.0% at the end of 2018, although growth slowed considerably in 2018. Moreover, despite an increasing number of MVNO subscribers, mobile ARPU (calculated using MNO retail and wholesale service revenue) was only 9% lower in 2018 than in 2014, a modest decline by regional standards. The future for MVNOs looks uncertain in Japan. Rakuten will become the country's fourth MNO and its fully virtualised network may provide it with a cost advantage, which will make the position of low-cost MVNOs more challenging. MNOs have also placed increasing emphasis on developing sub-brands to cater for the low end of the market, and MVNOs have expressed concerns that such operations receive preferential treatment from the MNOs.

The mobile market in South Korea is similar to that in Japan. When the first MVNOs launched in 2010, their subscriber share grew rapidly grew to 6.6% at the end of 2014, but in 2018, MVNO subscriber market share grew by only 0.2 percentage points, from 9.2% to 9.4%. The size of the impact of MVNO growth on overall mobile market pricing is also questionable. Mobile prices in South Korea are, in general, still high, and mobile ARPU in 2018 was USD25.9. In the DVAP region, only Australia and Japan had higher ARPU levels in 2018. As in Japan, MNOs in South Korea have developed sub-brands to counteract any threat from MVNOs, and MVNOs have also been hindered by strong take-up of fixed–mobile bundles among customers of the three converged MNOs. The three MNOs have also defended their position through loyalty schemes.

Regulators in DVAP need to determine whether fixed broadband providers can remain competitive without MVNO agreements in place, given increasing global levels of fixed–mobile convergence. However, there is limited evidence that fixed broadband providers will struggle in DVAP simply because they are not able to offer mobile services. This is partly because MNOs in some markets such as Australia have, so far, made few moves to offer fixed–mobile bundles.