"The FMC share of broadband accounts is high in China and Thailand and is increasing in several other countries in EMAP, such as Malaysia."

Fixed-mobile convergence (FMC) bundles are an increasingly common feature in the emerging Asia–Pacific (EMAP) region; they account for a significant proportion of fixed broadband accounts in China and Thailand and are growing in popularity in several other countries, such as Malaysia. Operators in EMAP must assess the potential effects that convergence may have on the markets where they operate and should seek to minimise risks such as poor take-up and 'cannibalising' revenue. The way FMC is promoted varies by operator; some offer additional benefits if customers combine mobile and fixed contracts and others offer explicit discounts to customers. This comment details some of the findings of our recent case study report on FMC in EMAP.

FMC penetration is highest in the region in Thailand (see Figure 1) and China. In Thailand, the largest fixed operator True, hard bundles mobile SIMs in broadband offers and has built a strong mobile base. This has caused competitiors to respond with their own FMC offers. In China, all operators offer FMC bundles, and fibre upsell has been crucial to the development of FMC as it has been in Europe. FMC has had less of an effect in the other three countries that we analysed (Malaysia, the Philippines and Vietnam). FMC offers have had some impact in Malaysia and Vietnam and it is likely that they will become increasingly prevalent in these countries. Fixed broadband services have not reached saturation point in EMAP and many fixed incumbents have not invested in extensive mobile infrastructure so mobile network operators (MNOs) have an opportunity to build a fixed base of subscribers using fixed-mobile convergence offers. 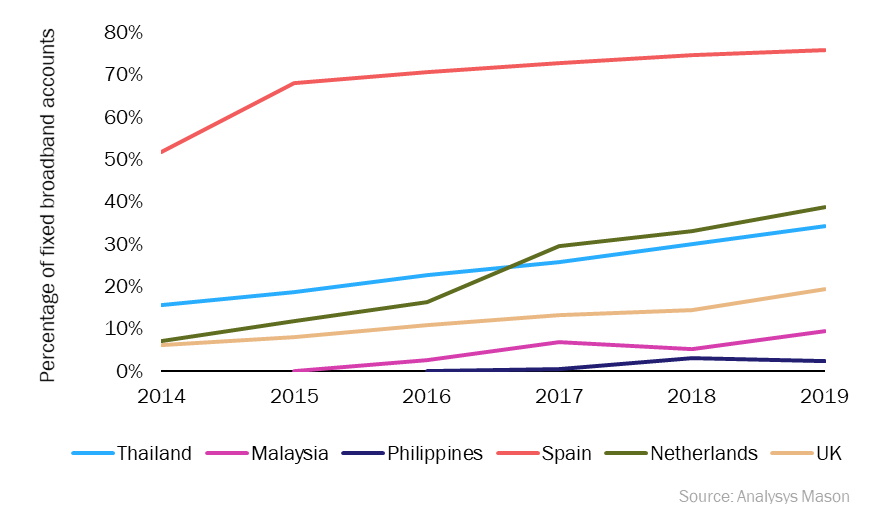 MNOs in competitive fixed broadband markets where FMC has already become prevalent (such as AIS and China Mobile) have had used discounting to drive fixed broadband take-up, but in both cases the operators had rolled out their own FTTH networks.

MNOs may not need to offer explicit discounts for mobile customers to encourage FMC take-up. Maxis in Malaysia is promoting a convergence offer that includes fixed broadband service over incumbent Telekom Malaysia's network so its retail pricing is confined by wholesale access costs. Therefore, it offers a mobile data bonus to converged customers rather than a discount. This strategy has been successful in an uncompetitive fixed broadband market.

Some operators have used convergence offers in a similar way to how they have been deployed in Europe: using a strong fixed broadband base to increase mobile subscriber numbers and protect the current subscriber base against churn. China Telecom and China Unicom pioneered this approach in China, and VNPT has used convergence offers to insulate its base in Thailand where the largest MNO, Viettel, has aggressively entered the fixed market.

We profiled five operators in our report, most of which have been successful with their FMC offers

Figure 2 summarises our case studies: we judge the relative successes of each operator based on how various metrics, including mobile and fixed market share of subscribers, subscriber net additions and revenue, have been affected by convergence.