"Operators should ensure that their self-care apps are well-designed and feature-rich in order to provide an improved user experience and appeal to more users."

Most operators in the Middle East and Africa (MEA) have launched their own self-care apps to reduce the cost of sales and customer care operations. However, the results of our Connected Consumer Survey from August and September 2020 show that the use of operators’ self-care apps remains low.

The adoption of operator self-care apps did not increase between 2019 and 2020 in most of the countries surveyed, despite COVID-19-related restrictions

We conducted a survey of smartphone users in eight countries in the Middle East and Africa between August and September 2020.2 We asked a minimum of 750 respondents per country questions regarding their usage behaviour, preferences and plans.

We asked respondents which channels they use to interact with their mobile operator. We then grouped their responses into two categories: traditional channels (telephone calls, emails and retail store visits) and digital channels (websites, self-care apps and social media). More than half of all respondents in MEA stated that they contact their mobile service provider using a telephone; this is the most-used channel for both customer support and to make a purchase (for example, adding a new service or topping up prepaid credit) across the region (Figure 1). In-store visits are the second-most-used channel.

Figure 1: Use of various channels to communicate with a mobile service provider for sales and customer support, Africa and the Middle East, 2020 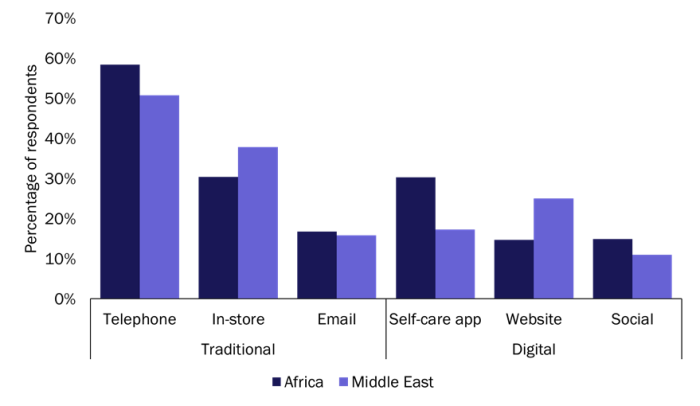 Our survey results show that store closures and movement restrictions due to the COVID-19 pandemic led to an increase in the use of self-care apps in 2020 in regions such as Europe and Asia. The Middle East is the exception; all operators had lower levels of self-care app penetration in 2020 than in 2019 (apart from du in the UAE, which retained the same penetration level).3 The use of self-care apps for customer support and sales in Sub-Saharan Africa only increased marginally between 2019 and 2020, but was still higher, on average, than that in the Middle East (30% and 17%, respectively). MTN (Nigeria), Safaricom, Vodacom, Ooredoo (Oman), stc (Saudi Arabia) and du have the highest levels of self-care app penetration in MEA (around 40%), while operators in Kuwait, Egypt and Saudi Arabia (excluding stc) have the lowest adoption rates.

The limited impact of the pandemic on the use of operators’ digital channels in MEA could be linked to the change in the types of customer enquiries, which may have rendered mobile apps less effective. For example, traditional channels are more suitable for downgrading a phone plan or asking for a delay to bill payments than digital channels. The features and capabilities of the self-care apps provided by operators in MEA also lag behind those implemented by their peers in Europe and Asia.

However, there are also a few outliers. For example, Mobily, Ooredoo (Kuwait) and stc (Kuwait) have relatively high satisfaction scores for their self-care apps, despite the low levels of penetration.

Figure 2: Satisfaction with and use of self-care apps for customer support, by operator, Middle East and Africa, 2020

Evidence that demonstrates the potential benefits of operators’ investments in self-care apps is starting to emerge in MEA. Operators with high self-care app penetration tend to have higher satisfaction ratings with different aspects of their mobile services, as well as higher NPSs. In fact, regression analysis shows that respondents that use digital channels (such as self-care apps) are more likely to recommend their operator than those that do not, all other things being equal. This means that there is likely to be an improvement to the overall satisfaction with customer service if an operator manages to increase customers’ satisfaction with its self-care app.

Operators in MEA that lag behind in terms of self-care app satisfaction and adoption have the potential to improve the quality of their digital channels and address issues that may discourage customers from migrating from traditional channels. Adopting best practices from leading operators in the region and worldwide may result in enhanced customer satisfaction and deeper engagement.

2 The countries included were Kuwait, Oman, Saudi Arabi and the UAE in the Middle East and Egypt, Kenya, Nigeria and South Africa in Africa.

3 Note that Egypt was only included in the 2020 edition of the survey.