"Salesforce is likely to use Slack as a tactic to support its core business; more disruption of the collaboration market seems likely because we expect Salesforce to buy a voice/video platform to strengthen Slack’s offering."

Salesforce announced on 1 December 2020 that it will buy Slack, a primarily text-based business communications/collaboration platform, for USD27.7 billion. This latest purchase reflects Salesforce’s strategy to expand its business through acquisition, having completed over 60 transactions to date. Other recent purchases include Tableau (USD15.7 billion) and Vlocity (USD1.3 billion). However, the Slack deal is different from many of the other acquisitions. The integration of Slack with Salesforce appears to be largely a defensive play to increase the ‘stickiness’ of other products rather than to drive revenue. Slack’s main rival, Microsoft Teams, is bundled with other Microsoft products for free, and this limits the scope for Salesforce to charge for the basic Slack product.

Salesforce is likely to next add voice and video capabilities through further acquisitions (Slack currently relies on Amazon Chime for voice and video). Any transaction would have implications for other unified communications players, including Zoom.

Slack has performed well during 2020 by most standard metrics. Revenue for the quarter to 31 October was USD235 million, up by 39% on the previous year. The number of net paid customers has increased by 140%. However, Zoom, another competitor to part of the Teams offering (Slack’s solution is mostly text-based and Zoom’s solution is voice/video, whereas Teams provides both elements), has benefited from far faster revenue growth than Slack (and almost every other company) during the pandemic (see Figure 1).

Slack’s perceived underperformance has weakened its share price. It was trading at around USD25 per share by November 2020, which is a fall from its June 2019 IPO price of USD38.50. The comparison with Zoom’s share price is also unflattering (see Figure 2). Potential investors in Slack were deterred mostly by competition from Microsoft, but other issues also contributed to the fall in the share price. For example, growth in demand for Slack decelerated during 2020 (3Q 2020 revenue grew by 40% year-on-year, compared to 60% a year before).

In addition, Slack also failed to develop its own voice and video solution – the critical component that it needed to compete against Zoom and Teams. In June 2020, it abandoned internal efforts and switched instead to using the Amazon Chime platform as the basis for Slack Calls. This failure came despite high levels of spending on R&D, which reached nearly USD100 million in 3Q 2020, accounting for over 40% of the company’s revenue. In comparison, Zoom’s R&D costs were around 10% of revenue during 2019 and even lower during 2020. 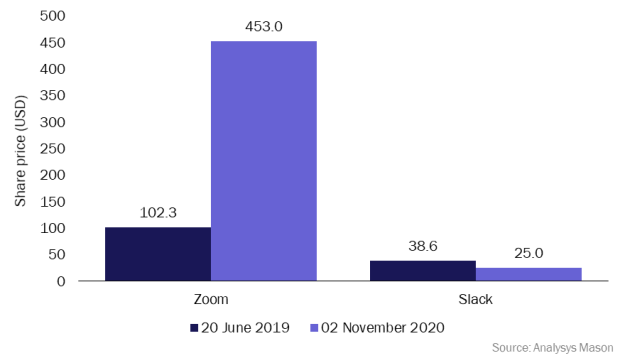 Investor dissatisfaction, intense competition and technical challenges together meant that Salesforce’s offer of cash and shares (worth around USD43 a share) provided Slack investors with an attractive exit, even if the offer values it only slightly above its IPO price (USD38.50).

Salesforce is trying to build a backend for all companies; collaboration is part of this

Salesforce’s ambition to become the digital backend for businesses is driving its acquisition of Slack. Salesforce provides products to assist sales, service, marketing, e-commerce and other teams. These products are supported by a platform that links to over 5000 third-party applications, as well as its analytics offering, which is based on Tableau. During the company’s quarterly briefing (held on 1 December), Bret Taylor, President and COO, said that Salesforce wants to be “the operating system for the new way to work”.

Salesforce has an aggressive target to reach USD35 billion in revenue by 2024, up from USD20 billion in 2020. However, the Slack acquisition will have a limited direct impact on Salesforce’s efforts to increase revenue. Slack’s revenue was USD833 million in the last 12 months, and it is unlikely to account for much more than 10% of Salesforce’s growth target of USD15 billion. In addition, the extra customers that Salesforce’s broader distribution will bring are unlikely to generate significant revenue growth, assuming that Salesforce bundles the basic Slack product with other services for free (as Microsoft does with Teams). Slack will also not deliver new customers to Salesforce because 90% of Slack’s customers are already using Salesforce.

However, Slack should help to unify Salesforce’s various product lines. Salesforce’s CEO Marc Benioff said that the company’s vision is to have “this incredible user interface [Slack] on top of all of these services”. He also described Slack as a company’s “central nervous system”. Slack will also make it extremely hard for customers to leave once its usage is embedded in their processes.

Salesforce’s objective inevitably ramps up its competition with Microsoft. This competition can be seen both at the product level – with an increasing degree of overlap in portfolios – but also directionally. Both companies want to be central to the operations of a business. Microsoft will use Teams as a link between its products and into the backend systems, including CRM systems, an area in which Salesforce already performs strongly, and Slack is part of Salesforce’s defence.

Voice and video services are likely to follow text collaboration

Salesforce is likely to add voice and video functionality to the user interface that helps unify and defend other services. Benioff admires what can be achieved when Slack is combined with voice and video. On the quarterly investor briefing, he said “look at what Zoom is doing with Slack. [It] is absolutely incredible”. Salesforce may be unwilling to rely on Amazon Chime for voice/video features in the long term. Further acquisitions seem likely.

More than a dozen cloud communications players have marketable solutions but are lacking in scale, features or customer base, as we highlighted in our predictions for 2021. Salesforce can afford any of these smaller players that could provide it with the voice and video capabilities it needs.

Teams already offers free video and voice calls between users, and the most common additional fee is for integration with the PSTN. Salesforce would need to follow a similar model and this move could threaten Zoom in particular, which relies on charging a fee for voice and video calls (Zoom Phone, the PSTN integration product, is only a small part of its business, though one on which it is now focusing increasing attention).

Salesforce’s purchase of Slack will change the collaboration market, but the disruption will not end there – the market for voice and video is likely to be next.

1 Slack’s IPO was in June 2019. Its share price rose during November 2020 following speculation of a takeover – the price shown is before this speculation increased the price.