Gurgaon, INDIA / London, UK  – Public Wi-Fi can play a key role in driving ubiquitous connectivity and digital inclusion in India, as explored in an Analysys Mason report -- ‘Accelerating connectivity through public Wi-Fi: Early lessons from the railway Wi-Fi project’, published today. Despite fast increases in number of people connected (316 million at the end of 2017, compared to 200 million the previous year), mobile broadband penetration in India stood at only 31% at the end of 2017, still significantly behind many of India’s peers. The report, prepared through the lens of Google and Railtel Public Wi-Fi project, support the Government’s ambition under the draft NDCP to reach 5 million access points in 2020 and 10 million in 2022, to provide an all-pervasive coverage and internet connectivity, for 600 million Indians.

The report further outlines an opportunity to develop a wider connectivity ecosystem with Public Wi-Fi as a key component, which can not only benefit users and wireless ISPs, but also telecom service providers, handset manufacturers and venue owners. TSPs in particular can benefit by monetising demand for faster mobile broadband and higher data volumes on their networks, as people get used to fast speeds and ubiquitous connectivity.

The report found that around 100 million people would be willing to spend an additional USD 2 to 3 billion per year on handsets and cellular mobile broadband services, as a result of experiencing fast broadband on public Wi-Fi. In addition to driving productivity improvements from high speed Wi-Fi for the overall economy, public Wi-Fi can also translate into tangible benefits to GDP, by around USD20 billion between 2017-19 and at least USD10 billion per annum thereafter.

David Abecassis, Partner at Analysys Mason, said: “In the last few years, India has made significant progress in driving mobile data usage, thanks to improved networks, and low cost data. But to really achieve the connected India vision, India will need to further invest in developing public Wi-Fi as a complement to mobile and fibre broadband. Google and RailWire project to deploy high speed Wi-Fi across 400 stations has shown that there was a technical and operational solution to providing high-quality public Wi-Fi to millions of Indians nationwide, on affordable terms. The success of this rollout and Reliance Jio’s 80,000 public Wi-Fi access points as of mid-2017 provide valuable insights in further developing public Wi-Fi as a service that can truly achieve the Digital India vision.”

K. Suri, Director, Partnership, India, Next Billion Users, Google India, said, “Our partnership with RailTel to bring high speed connectivity to millions of Indians across 400 train station, today stands as a lighthouse project for the industry and underscores the importance of investing in public Wi-Fi as a crucial step in getting high quality internet to everyone in India. This is just the beginning of a journey that will change India’s access story and the Analysys Mason Report outlines some very important insights that can enable ISPs and TSPs to think in this direction. Together we have a lot of work to do to improve access and connectivity in the country.”

The report further highlights that the Investment in public Wi-Fi can further unlock an opportunity for Mobile operators to offload excess data traffic from cellular networks, and deploy advanced technologies such as Hotspot 2.0 for ensuring interoperable roaming between cellular and Wi-Fi.

Analysys Mason is a global consultancy and research firm specialising in telecoms, media and technology for more than 30 years. Since 1985, Analysys Mason's consulting and analyst teams have played an influential role in key industry milestones and helping clients around the world through major shifts in the market. Our consulting and research divisions continue to be at the forefront of developments in analytics, digital services and transformation and in advising clients on new business strategies to address disruptive technologies. Our experts located in offices around the world provide local perspective on global issues. For more information, please visit Analysys Mason.

Google's mission is to organize the world's information and make it universally accessible and useful. Through products and platforms like Search, Maps, Gmail, Android, Google Play, Chrome and YouTube, Google plays a meaningful role in the daily lives of billions of people and has become one of the most widely-known companies in the world. Google is a subsidiary of Alphabet Inc. 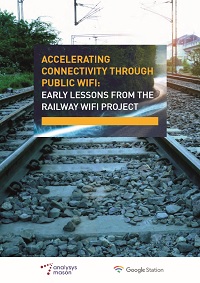 The report, prepared through the lens of Google and Railtel Public Wi-Fi project, outlines an opportunity to develop a wider connectivity ecosystem with Public Wi-Fi as a key component.