Independent study finds that the socio-economic benefits of C-V2X will amount to EUR43 billion by 2035, based on 5GAA’s proposed approach to co-existence


Brussels, 5 December 2017 – The 5GAA today published a report, authored by independent telecoms, media and technology consultants Analysys Mason together with automotive consultancy SBD Automotive, which assesses the benefits of cellular vehicle to everything (C-V2X) technology for delivery of vehicle-to-everything (V2X) communication. The report, which has a focus on the benefits of such solutions in Europe, uses qualitative evidence, and describes quantitative cost–benefit analysis that the consultants have undertaken, relating to deployment of C-V2X.

Publication of the report coincides with policy development on V2X, and use of the 5.9GHz band, in the European Union (EU), where the European Commission is currently undertaking a public consultation on the deployment of cooperative intelligent transport systems (C-ITS).

The study concludes that the deployment of C-ITS systems is beneficial at the EU level. Net benefits that could be accrued in Europe are estimated to be in the range of EUR20 billion to EUR43 billion in 2035 (with the highest benefits coming from increased road safety, and traffic efficiency), across the four scenarios modelled.

The most favourable scenario of those modelled in the study (amounting to EUR43 billion in net benefits) is one which maximises the potential for rapid penetration and economies of scale for C-V2X, and where both C-V2X and the Wi-Fi standard IEEE 802.11p are able to co-exist in the 5.9GHz spectrum band. Less than half this level of net benefits is expected to arise in a scenario where the use of IEEE 802.11p is mandated for C-ITS services (EUR20 billion).

The study also indicates that benefits of C-V2X for the European market lie in its deployment flexibility, with the ability to provide coverage for both short-range and wide-area applications, and certainty of future evolution to 5G, potentially facilitating earlier deployment as well as after-market deployment (e.g. V2X services provided in vehicles via a smartphone or other after-market device with C-V2X connectivity).

A reduction in infrastructure deployment costs is a further key benefit of C-V2X, due to the potential to re-use existing mobile infrastructure, and thus leverage cellular technology integration and economies of scale, rather than building independently operated roadside infrastructure.

Christoph Voigt, 5GAA Chairman comments: “C-V2X will be fundamental to the deployment of cooperative intelligent transport systems. The benefits highlighted in this report indisputably demonstrate that this technology will lead to major improvements in driving and road safety. It further highlights that the European Commission should take a technology-neutral approach and not limit these benefits by mandating the use of the Wi-Fi standard IEEE 802.11p.”

The socio-economic benefits study on C-V2X can be found here.

Separately, the 5GAA has also today published a study which carries out a quantitative analysis of LTE-V2X (PC5) and IEEE 802.11p technologies for short-range ad-hoc/direct communications in reducing fatalities and serious injuries caused by motoring accidents in the EU. The modelling underlying this report was peer-reviewed and validated by the technology and policy consultancy, Ricardo. The study found that LTE-V2X (PC5) outperforms 802.11p in reducing fatalities and serious injuries on the EU’s roads. The 5GAA’s study on an assessment of LTE-V2X (PC5) and 802.11p direct communications technologies for improved road safety in the EU can be found here.

V2X allows vehicles to communicate with each other and with the wider transport ecosystem. It will potentially complement on-board sensors by providing enhanced information (such as data from other vehicles) over a longer range.

The 5G Automotive Association (5GAA) is a global cross-industry organisation of companies from the automotive, technology and telecommunications (ICT) industries, working together to develop end-to-end solutions for future mobility and transportation services. Created in 2016, the Association is comprised of over 67 members which mission is to develop, test and promote communications solutions, initiate their standardisation and accelerate their commercial availability and global market penetration to address societal need. 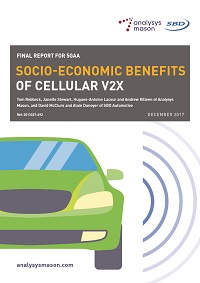 This report assesses the benefits of C‑V2X technology for delivery of V2X communication.