The Future Network talked to Lim Chuan Wei, Partner at Analysys Mason based in Singapore, about the requirements of 5G and the implications for the cellular network.

What 5G will mean for network planning is still high on the agenda for discussion around the world. There are many questions around the implications for infrastructure, spectrum, and business models, and often, quite simply what 5G actually is. We have outlined some of the most pertinent use cases and main case studies and trials that are currently running around the world as mobile network operators, and infrastructure companies, try to get ahead of the curve and implement network densification strategies. We also touch on the potential for active infrastructure sharing as we move into the higher frequency bands required for 5G. Could this be the game changer that allows the neutral host business model to succeed? Who will be that neutral host? And how can both the passive and the active infrastructure providers evolve to facilitate the next generation of network evolution?

The Future Network: Could you please explain your vision of 5G?

Lim Chuan Wei, Partner, Analysys Mason: The 5G vision is that networks must be higher performing, with both very low latency, and very high throughput. To date, cellular technology(2G / 3G / 4G) has evolved to improve spectrum efficiency, coverage and capacity, and to keep up with data traffic growth. The vision for 5G is more revolutionary, proposing improvements to nearly all aspects of telecoms and service delivery, including:

The Future Network: And in terms of case studies for 5G, have you seen any trends emerging that may prove the use case?

Lim Chuan Wei, Partner, Analysys Mason: We have identified four main groups of case studies for 5G, and each has different characteristics and network requirements.

The Future Network: Can you tell us a little bit about the spectrum requirements for 5G?

Lim Chuan Wei, Partner, Analysys Mason: 5G is expected to use a range of spectrum bands, including some currently used for mobile and others to be assigned. The traditional spectrum bands are between 700MHz – 2.6GHz. 3.5GHz spectrum is already assigned to fixed wireless operators using LTE in many European countries, and to CBRS in the US. Spectrum bands around 3.5GHz are emerging as the most likely spectrum for initial deployment of 5G in several markets worldwide, due to the potential for larger channels (e.g. up to 100MHz per operator). New bands due to be released for 5G are from the higher bands, and ranging between 24.5GHz – 27.5GHz, and 40.5-43.5GHz (cm-wave), and 60-80GHz (mm-wave). There is more availability as we move up the spectrum, with less than 1GHz available below 5GHz, but substantially more from 24.5GHz upwards. 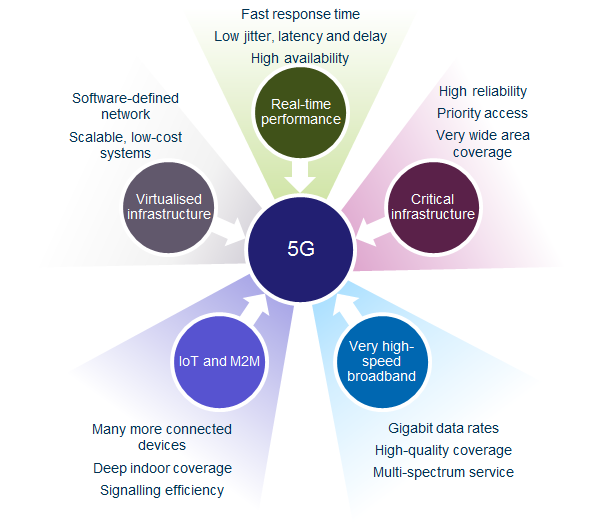 The Future Network: And what does this mean for the network topography? Will we see small cells being used as an infill solution, or more macro cells being installed?

Lim Chuan Wei, Partner, Analysys Mason: Due to their low propagation characteristics, higher frequency bands are likely to be used mainly for dense small cells. At the higher bands cell radii will decrease. In the traditional spectrum bands, macro cells can be placed 10s of km apart. As we move to 3.5GHz/5GHz they would need to be placed approximately 1km apart, or up to 5-6 km apart on rural areas with outdoor antennas achieved by fixed wireless operators on 3.5GHz. At the higher end (between 24.5GHz-27.5GHz / 31GHz) cells will reach 100s of metres, and at the highest end 70GHz-80GHz, the mm-wave, and potentially the cm-wave are likely to require line of sight – we estimate there will need to be a cell approximately every 10 metres. In the higher frequency spectrum the business case for standalone deployment is greatly diminished. If you have to densify the network to the extent we anticipate, not only will there be significant challenges in urban environments, e.g aesthetics issues and local government simply not wanting to allow for extensive network deployment, but the volume of equipment needed, multiplied by the number of operators needing to deploy it makes it an untenable solution. What we do see, however, is the high likelihood that there will be active network sharing as we go up to the higher frequency spectrum, providing opportunities for potential neutral hosting. 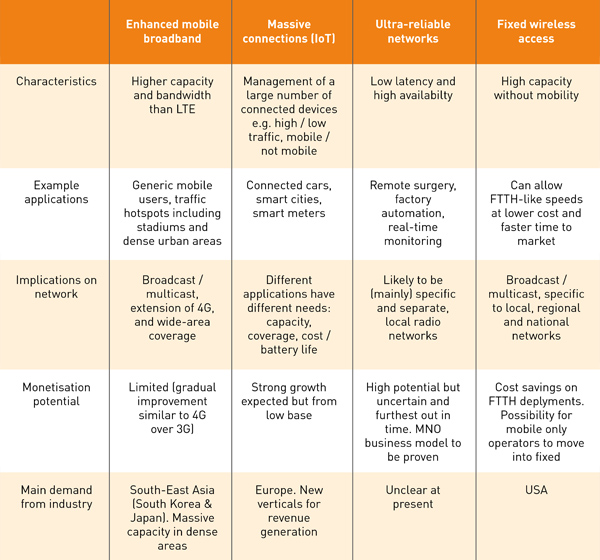 The Future Network: Let's talk about spectrum sharing, because this seems to be one of the biggest barriers to progress with distributed networks, especially, and understandably for the operators. Is this still something we should be talking about?

Lim Chuan Wei, Partner, Analysys Mason: The new bands may not all be exclusively licenced and this may indeed lead to the need for sharing between 5G operators, and with incumbent users. This could also lead to increased active network sharing, and sharing with incumbent users of cm-wave and mmwave bands is also envisaged, but until we have confirmation on policy and approach we can't know if this will still be a topic for conversation. In Europe there is an EC mandate to CEPT (the European Conference of Postal and Telecommunications Administrations) requesting they conduct a study on harmonisation conditions for the 26GHz band.

The Future Network: How do discussions around bandwidth and available spectrum differ around the world?

Lim Chuan Wei, Partner, Analysys Mason: Recent industry interest in 5G has focused on the 24.25- 29.5GHz band in various parts of the world, and 3.4-3.8GHz in Europe, USA and China. In Europe, the USA, China and Japan where interest has been on frequencies below 6GHz, the benefits of this range is that there is good bandwidth available, licensing frameworks are already being defined (in Europe), 3GPP is standardised, but we have not achieved full 5G capacity. There is not much being proposed in the 6GHz – 20GHz range as it is already heavily utilised for fixed links and satellite services, although there has been some interest in the 10GHz-10.4GHz band. The 20GHz – 30GHz band has been the key focus of equipment development and trials to date in Europe, the USA, Korea and Japan, although exact bands vary by region from 24.5GHz up to 29.5GHz. And above 30GHz has been deemed not to be an initial priority for 3GPP standards but there is growing industry interest in future options e.g. 40.5GHz – 43.5GHz.

The Future Network: So what will networks look like under 5G?

Lim Chuan Wei, Partner, Analysys Mason: Under 5G networks will be a mixture of different technologies and solutions, and will be based around a new flexible air interface for high-bandwidth and high latency / reliability applications, we believe that under 6GHz the network is likely to be deployed mainly as small cells. We expect they will include direct device-to-device connection, which is not yet widely implemented, and that end use devices could connect to remove latency while the network connection provides validation and verification services. Under LTE-A which is likely to be used for macrocells in the early years – our expectation is that this is until at least 2025 – but will be gradually replaced by 5G air interfaces as end user devices become more compatible. LTE will be incorporated into and integrated with 5G and may evolve to converge with 5G, and narrowband IoT, which is currently under development in 3GPP may be used for mass market M2M / IoT – the challenge for massive M2M / IoT is not the traffic generated but managing the connections and signalling.

The Future Network: And how do you see the timeline for 5G network deployment playing out, and what role will macrocells and small cells play in this vision?

Lim Chuan Wei, Partner, Analysys Mason: Up to 2020 we see 4G continuing to be the main technology deployed, but we see macro layer densification continuing, driven by QoS, in both suburban and rural areas, and capacity in dense urban areas. We envisage small cell layers beginning to be deployed, focused on hotspots in dense urban areas and specific solutions in the indoor space and some rural not-spots. Between 2020-2025 we believe that 5G will coexist with 4G and that macro layer densification may subside in dense urban and urban areas, with deployments in the former tending to be small cells, but we expect macrocell densification to continue in the suburban and possibly rural areas as users come to expect higher speeds. Beyond 2025 we see 4G and 5G merging together, and continued network densification, mainly through the use of small cells, but macrocells could still be required in rural areas.