There is a consensus among industry observers that we will experience strong growth in mobile cellular connectivity from M2M and embedded mobile applications. Many millions of new non-personal, data-only mobile devices will be added to existing networks, supporting a plethora of established, emerging and presently unimaginable applications. Vehicle tracking devices, industrial monitors, handheld devices (e-readers, cameras) and healthcare monitors are just some of the devices expected to emerge and proliferate.

Today’s mobile networks are predominantly geared towards supporting the communications needs of personal subscribers with voice, SMS and small-screen Internet handsets, as well as a growing base of mobile broadband users with laptops, tablets and (increasingly) smartphones. These user groups have been evolving steadily in terms of network technology and traffic load over the last decade of mobile service growth. Handsets and laptops are typically replaced every two to four years, and operators can subsidise the up-front costs to stimulate the rapid take-up of new devices. This means that there can be a rapid churn of user terminals and so large-scale network evolution can be managed over a small number of years.

There is a sharp contrast between the current situation and our expectations for the growing M2M market. Chipsets for M2M use are embedded into the host machines and end-user devices. The very nature of such devices means that they exist in a variety of situations, sometimes places that are costly to reach (such as on-board vehicle electronics, utility meter cabinets, industrial facilities, etc.). As a result, these chipsets are much more difficult to replace and upgrade than personal mobile handsets and laptops, which can be upgraded simply by sending new devices through the post, or through retail outlets. Furthermore, the expected lifetime of some M2M devices is significantly longer than for a handset.

In a recent study for the GSMA, Analysys Mason investigated the hypothesis that the growing installed base of M2M and embedded mobile devices will have problematic long-term impacts on the mobile networks that support them. We conducted industry research with players in the M2M and embedded mobile ecosystem which informed three key findings.

Industry research informed our lifetime estimates, as shown in Figure 1 below. 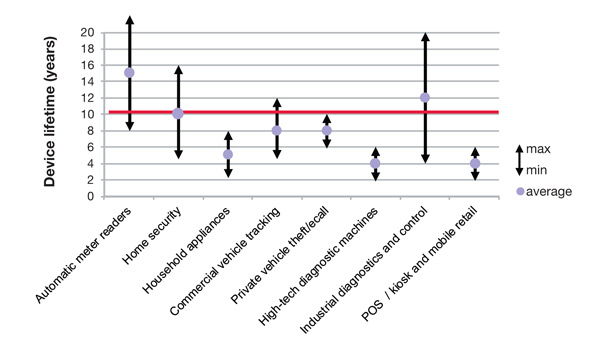 We also developed a market forecast model which used the growing forecast number of devices to project the rate at which 2G M2M devices would be replaced. The effects of long-lifetime devices can be seen in the slowly declining 2G curve in Figure 2 below. 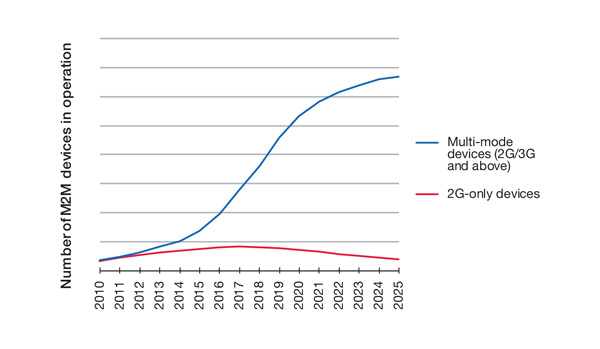 In our experience, many mobile operators plan their network strategy up to five years ahead, and the most significant issue in the coming five years is spectrum re-farming from 2G to 3G and 4G technologies – resulting in the potential shut-down of old 2G networks. This means that long-lifetime 2G devices could have a long-term impact on the ability of network operators to evolve their networks in the coming decade. Options that operators could consider in this situation are outlined below.