A deadline of 30 June 2020 (or up to 2 years later with adequate justification) has been set for the reassignment of the 700MHz frequency band (694–790 MHz) to wireless broadband services in Europe.1 A related deadline of 30 June 2018 was set for the national regulatory authorities (NRAs) in Member States to adopt and publish a national roadmap outlining how this reassignment will be achieved. Progress towards the June 2020 reassignment deadline has been significant, although not all NRAs have as yet adopted such a roadmap. This is commendable given that the difficulty of this transition process, involving extensive changes for broadcasters and PMSE users and multi-national interference co-ordination, cannot be underestimated.

Clearance of the 700MHz band is well underway across Europe

In May 2018, NRAs in the EU Member States (and a small number of other neighbouring European countries) responded to a questionnaire from the Radio Spectrum Policy Group (RSPG). As part of this questionnaire, each NRA provided their estimate for when the 700MHz band would be cleared within their Member State in preparation for the reassignment.2

As shown in Figure 1, most countries appear to be on track to have cleared the band by the June 2020 deadline, with clearance already having been completed in five Member States. Moreover, in almost all cases, cross-border co-ordination between Member States has been finalised (as was required by December 2017).

Some difficulties remain however, largely due to unresolved cross-border interference from non-EU countries, including Albania, Belarus, Russia and countries in North Africa. A heavy reliance on DTT in some markets is also a factor, most notably in Italy, where significant complexity arises due to the large number of TV multiplexes in operation.

Despite this, only six Member States have indicated that they expect to miss the June 2020 deadline, and in all cases, it is anticipated that clearance will be completed within the permitted 2-year extension. It is important to note, however, that there are also some Member States that plan to meet the June 2020 deadline, but may still face difficulties in achieving this. For example, there have so far been limited details released regarding the proposed transition process in some markets, such as Greece, Portugal and Spain, while others, such as Cyprus and Poland, continue to face potential interference issues from outside the EU.

Figure 1: Expectations for clearing the 700MHz band in preparation for mobile services by June 2020 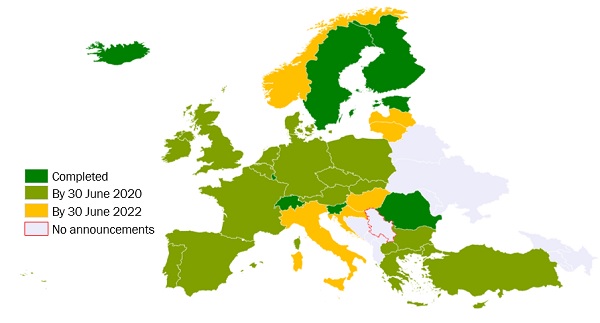 In parallel with the clearance activities, European regulators are pushing ahead with awarding the 700MHz band to mobile operators. Regulators in Finland, France and Germany have already conducted such awards and have issued mobile licences in the 700MHz band. Of the remaining 25 EU Member States, 16 are planning to assign the 700MHz band by June 2020, and a further 3 (Ireland, Luxembourg and Spain) are currently consulting on the necessary terms (and timing).

Only two Member States (Croatia and Latvia) have indicated that they may be unlikely to reassign the spectrum before June 2020. In both cases, there is a bottleneck for clearing the spectrum, which accounts for the delay. A further four Member States (Bulgaria, Cyprus, Greece and Portugal) have not yet announced any plans for a spectrum award, meaning that six countries are in danger of missing the June 2020 reassignment deadline on this basis.

This suggests to us that although there are only six Member States that have indicated that they will miss the 2020 deadline, either due to not having cleared the band or not having reassigned it, in reality the eventual number might be slightly higher. However, in all cases it seems likely, as things stand, that the reassignment will occur within the following 2 years.

Originally, the 700MHz band was envisaged as being suitable to provide additional 4G capacity and was seen as being particularly useful for this purpose in rural areas or towards cell edges. However, more recently, policy makers have been assuming (explicitly or implicitly) that the 700MHz band will provide the wide area coverage layer for 5G new radio (NR). The European Commission, for example, has a target of ‘5G everywhere’ by 2025, which, to be achievable, would need to make heavy use of low frequency spectrum (and hence the 700MHz band). However, as of today, 5G NR has not gained much traction in low-frequency bands (only 2% of 5G trials to date have been in the 700MHz band) and although there are numerous LTE devices that are compatible with the 700MHz band, there are not yet any 5G NR devices that use this band.

Moreover, most of the benefits of 5G that are widely talked about, at least for enhanced mobile broadband (eMBB) uses, manifest themselves in larger spectrum blocks and are therefore most relevant for 3.4–3.8GHz and higher mmWave frequencies. The benefits of using 5G NR in the 700MHz band for eMBB are thus more limited. The main rationale for 5G (rather than 4G) deployment in the 700MHz band therefore seems to be about providing wide area coverage of 5G features, supporting IoT and some of the verticals such as medical applications or connected cars (massive machine-type communications and ultra-reliable low-latency communications in 5G jargon).

The result might be that many initial deployments in the 700MHz band are 4G, as seen with Free in France, with the potential for subsequent ‘upgrades’ to 5G NR, at relatively low cost. Alternatively, operators may delay deploying the 700MHz band until devices are available to support 5G NR. This might depend, for example, on how urgently individual operators require additional low-frequency spectrum capacity. The business case for 700MHz deployment requires careful consideration, and the conclusions may vary by operator and by Member State.

This decision may of course also be influenced by the timing of 700MHz availability and its assignment in individual markets, as well as the terms of such assignments. As such, careful consideration is also needed when assigning 700MHz spectrum. For example, when setting any associated coverage obligations, the development of the 5G NR device ecosystem must be considered, alongside what services the market requires.

Analysys Mason offers services including spectrum valuation and auction support, as well as advice on business planning and spectrum management issues, to operators and regulators around the world. For more information about our services, please contact Mark Colville, Principal, at mark.colville@analysysmason.com.