This article has been written in partnership with Lear.

Liberalisation of the European telecoms market has repeatedly led to intervention by regulatory and competition authorities, to detect, punish and deter potential anticompetitive conduct. In the last 20 years, several national incumbent operators have been found to have abused their dominant position in the fixed telecoms market and hindered alternative operators from accessing their networks. By abusing its dominant position at the access (and upstream) level, an incumbent operator may alter competition in the downstream markets and ultimately harm alternative operators and final consumers. Such conduct represents a violation of Article 102 of the Treaty of Functioning of the European Union (EU) and is subject to sanction by the competition authorities. Since 2000, the European Commission (EC) has fined five telecoms operators in different countries for abuse of their dominant positions:

Abuse of a dominant position may take different forms: for example, incumbents may refuse to deal with alternative operators (e.g. the case of Telekomunikacja Polska) or exert margin squeeze (e.g. the case of Slovak Telekom). Any form of abuse may have a negative effect on alternative operators and consumers, and may be followed by a request for compensatory damages. However, it is not straightforward to quantify the damages caused by an abuse of dominance.

By comparing the relevant economic outcomes (price, quantity, quality, costs and profits) in the actual and the hypothetical scenarios it is possible to provide an estimate of the damage suffered. However, claimants must be able to prove that the difference between the two scenarios is entirely attributable to the incumbent’s conduct. Therefore, it is crucial to identify the appropriate hypothetical non-infringement scenario.

By definition, the non-infringement scenario cannot be observed, and must be constructed through the use of reasonable assumptions and hypotheses. For this purpose, the EC has issued a Communication on quantifying harm in actions for damages based on breaches of Article 101 or 102 of the TFEU (C(2013) 34) (Communication), accompanied by a Practical Guide.1 The Practical Guide provides indications of methods and techniques that can be adopted to quantify damages to be awarded in case of infringements of EU competition rules.

The Practical Guide describes several approaches for constructing a non-infringement scenario. Comparator methods are the most widely used by interested parties, stakeholders and courts. The underlying idea is to look at time periods before and after the infringement (so-called before-and-after approach) or at similar geographical or product markets that were not affected by the infringement (yardstick approach) to estimate the counterfactual scenario. The evolution of alternative operators’ market shares in similar geographical markets that were not affected by the abuse of a dominant position, for instance, may be used as a benchmark to estimate what would have occurred without the abuse.

Before-and-after and yardstick analyses can also be combined, to yield more-reliable estimates of the counterfactual scenario. Comparator-based methods can also be complemented with finance-based methods which rely on calibrating the hypothetical scenario with the costs and revenues which the telecoms operators would have realised if the abuse had not taken place.

Figure 1 below shows that in two of the five abuse cases where the EC has fined incumbents, the DSL market share of alternative operators was significantly lower than the average for the rest of the EU market during the period of the abuse. This difference could be interpreted as the effect of the incumbent’s foreclosure strategy, which would not have occurred in the non-infringement scenario. However, conclusions such as this can only robustly be reached after carefully controlling for the effect of other factors that may explain the evolution of market shares in the country concerned, such as date of liberalisation or adoption of competing access technologies. 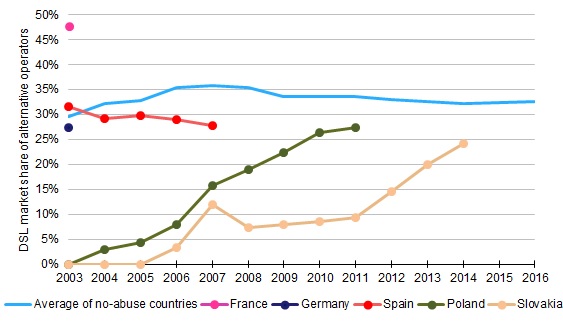 Note: The lines on this chart only extend up to the year when the abuse case in question was settled.

The effect of the abuse findings can also be inferred from the post-abuse market shares. In the three large West European nations where an abuse was found and dealt with, alternative operator market shares reached 47%–58% in 2016, above the rest of the EU range. In Poland and Slovakia, however, where the abuse findings came relatively late in the DSL broadband technology cycle, alternative operator market shares post-abuse have remained lower, at around 25%.

Each quantification method has strengths and weaknesses that may make it more or less suitable for estimating the damages caused in a given set of circumstances. The implementation of each method requires the appropriate use of economic and statistical techniques and a deep understanding of the functioning of telecoms markets.

Analysys Mason and Lear have worked in partnership on a number of assignments to investigate and quantify damages relating to an incumbent’s abuse of dominance. We are able to combine our complementary knowledge of telecoms networks and business planning, economics, antitrust practices and regulatory intervention to guide stakeholders to robust and defendable positions. We have also assisted policy makers to understand the impacts of competition policy and interventions.2

1 Both documents are available at http://ec.europa.eu/competition/antitrust/actionsdamages/quantification_en.html

2 See, for example, the report that Lear, DIW Berlin and Analysys Mason produced for the EC, Economic impact of competition policy enforcement on the functioning of telecoms markets in the EU, available at http://ec.europa.eu/competition/publications/reports/kd0417233enn.pdf