The rate of change for communication sector USOs: it’s a question of time

Twenty-two years ago, an esteemed group of economists, professors, and postal company managers met in Rugby, England to discuss postal and delivery economics at the Centre for Research in Regulated Industries' (CRRI's) first postal conference, arranged to coincide with the 150th anniversary of the first uniform UK-wide communications network, the Penny Post.

While I was still in secondary school, the conference delegates debated topics such as 'Is the postal service a natural monopoly?' and 'Competition and entry in postal markets.' By 1992, the regulatory environment for public postal service providers was on the table.

Fast forward to 2012, and last month the CRRI's 20th Conference on Postal and Delivery Economics presented topics such as 'Is the postal service [in Germany] a natural monopoly after all?' and 'Competition and the social cost of regulation in the postal sector.' The significant body of increasingly detailed work developed through these conferences has undoubtedly assisted postal providers – incumbent and competitor – to adapt mail services to the significant change in volumes and preferences of mailers and recipients over two decades.

Much has also changed in the world of communications since 1990. The rate of change is increasing and, by 2020, smartphones, fibre and 4G wireless will be well-established technologies; telecoms and media providers will be seeking the next next-generation of converged, superfast, superconnected services.

The most important consideration for today's policy makers is that key regulations, listed below, were defined before the onset of these significant changes.

In the postal sector, overall mail volumes in Europe, which peaked in about 2005, are estimated to have already fallen below pre-1997 levels. Meanwhile, since the peak in mail volumes and following the 2002 Universal Service Directive update, European mobile network traffic has grown by a factor of five. Mobile network traffic is forecast to multiply again by a factor of ten in the next five years (see Figure 1). 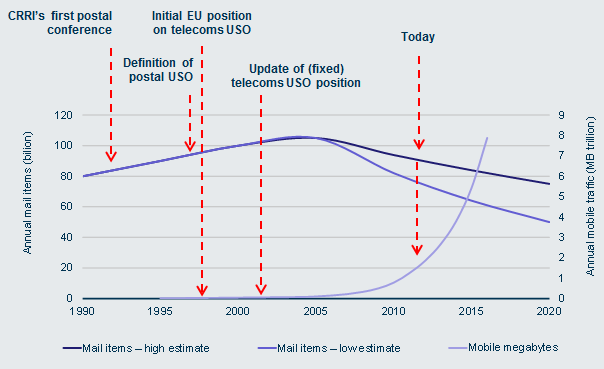 1  The EU15 refers to member countries of the European Union prior to the accession of ten candidate countries on 1 May 2004. The EU15 comprised: Austria, Belgium, Denmark, Finland, France, Germany, Greece, Ireland, Italy, Luxembourg, the Netherlands, Portugal, Spain, Sweden and the UK.

Today's discussions in the telecoms sector relate to whether faster and/or mobile broadband services should be part of the universal service obligation, but actions by fixed and wireless network providers, coupled with regional and national policy guidance and contributory funding, suggest that the (super-fast) broadband revolution will soon deliver considerably more than our previous expectations.

Where will this leave postal providers in ten years' time? The question I want to pose here is firmly in the hands of policy makers, because communications service providers in increasingly dynamic competitive markets must be in a position to respond and adapt in order to grow, or to survive.

Can the global governing bodies of the communications sectors, the European Commission, consumer and business organisations and national regulatory authorities turn the wheels of policy fast enough?

The physical and electronic developments in the communications market create the need to reconsider and redefine universal service requirements in the postal sector, and to allow providers to innovate for the benefits of consumers and businesses - for 2020 and beyond. Or will today's secondary school students also approach this question in twenty years' time?