"Regulators that are looking to award the 26GHz band should focus their thinking around four key considerations: bandwidth, geographic scope and duration, licence cost and obligations and demand and competition."

The EC proposed, in its 2016 5G action plan, that member states should grant access to at least 1GHz in the 26GHz band for mobile use by 30 March 2020, provided that there is market demand.1 The plan envisaged that 5G networks would start to be introduced by 2018, and that at least one major city in each country would be ‘5G-enabled’ by the end of 2020. All urban areas and major terrestrial transport paths in all member states were expected to have uninterrupted 5G coverage by 2025. The Implementing Decision2 set out common technical conditions in order to allow the use of the 26GHz band for 5G systems by 31 December 2020. At present, it is expected that this band will initially be used in traffic hot spots, transport paths and/or industrial sites, with enhanced mobile broadband (eMBB) services likely to be deployed first.

The deadline for assignment that was originally set in the EC’s 5G action plan has now passed, and awarding 26GHz spectrum by 31 December 2020 continues to look ambitious. At the time of writing, regulators in Italy and Finland were the only ones to have awarded 1GHz in the 26GHz band for mobile services, and consultations (with the aim to award some of the 26GHz band in 2020) were only underway in a further six member states.3 The COVID-19 pandemic is likely to slow progress for these states and others that are working towards a post-2020 timescale.

Uncertainty regarding the commercial use case remains, in our view, the main barrier to further assignments in the 26GHz band. This uncertainty makes it difficult for operators to assess when and how the spectrum might be of use to them and hence, the quantity of spectrum that they need and the value that they might place on it.4 At the same time, there is a potential demand from enterprises for spectrum to use in private networks, which could, at least partly, be addressed by spectrum in the 26GHz band.

It is therefore extremely challenging for regulators to determine how much 26GHz spectrum to assign for mobile services, when to assign it and how this should be done, including the detailed design of an appropriate award mechanism, such as an auction. Nonetheless, regulators are required to both uphold the EC Implementing Decision and meet their other statutory duties such as ensuring an efficient assignment of spectrum and protecting (or enhancing) competition. In this context, we suggest that regulators focus their thinking around four key considerations.

Figure 1:Normalised prices7 for recent spectrum awards in the 26GHz and 28GHz bands 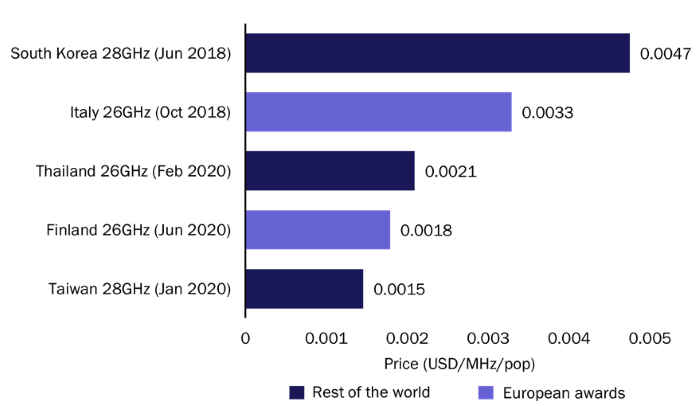 Careful consideration of each of these areas should help to ensure that regulators are able to assign 26GHz spectrum licences in the most appropriate manner for the individual market concerned.

Analysys Mason offers services including spectrum valuation and auction support, as well as advice on business planning and spectrum management issues, to operators and regulators around the world. For more information about our services, please contact Mark Colville, Janette Stewart or Gentiana Shiko.

3 These states are Belgium, Denmark, France, Germany, Spain and the UK; the regulator in Sweden is planning to award some 26GHz spectrum in 2021.

4 We will consider the issue of 26GHz licence valuation in more detail in an upcoming article.

6 In Italy, services are to be made available in each region 48 months from spectrum assignment date. In Hong Kong, the regulator relaxed the short-term roll-out obligation timelines following feedback from the MNOs. In South Korea, the conditions for the award of 28GHz spectrum include that it should be rolled out to 100 000 base stations (macro or small cells), including 15 000 within the first 3 years. In Finland, services should be launched within 2 years of the licence start date (1 July 2020), but this is open for reconsideration based on technology advances and the economic situation.

7 Normalising to a licence duration of 20 years, assuming a 6.0% WACC and adjusting to 2020 real terms; ALFs are included where applicable.