The mobile telecoms industry in Africa has burgeoned in recent years, but slowing revenue growth, increasing costs and shareholders demanding returns are forcing operators to consider the next wave of investment. This article examines their options and suggests that lessons can be learned from operators in other parts of the world.

Mobile penetration has grown dramatically in Africa during the past 5 years, from 29% to 69%. According to GSMA Intelligence, 358 million people on the continent are now connected. This growth has been driven by the issue of new licences: the average number of GSM licences in African countries is currently 3.8, and at least 13 countries have four or more GSM operators (see Figure 1). 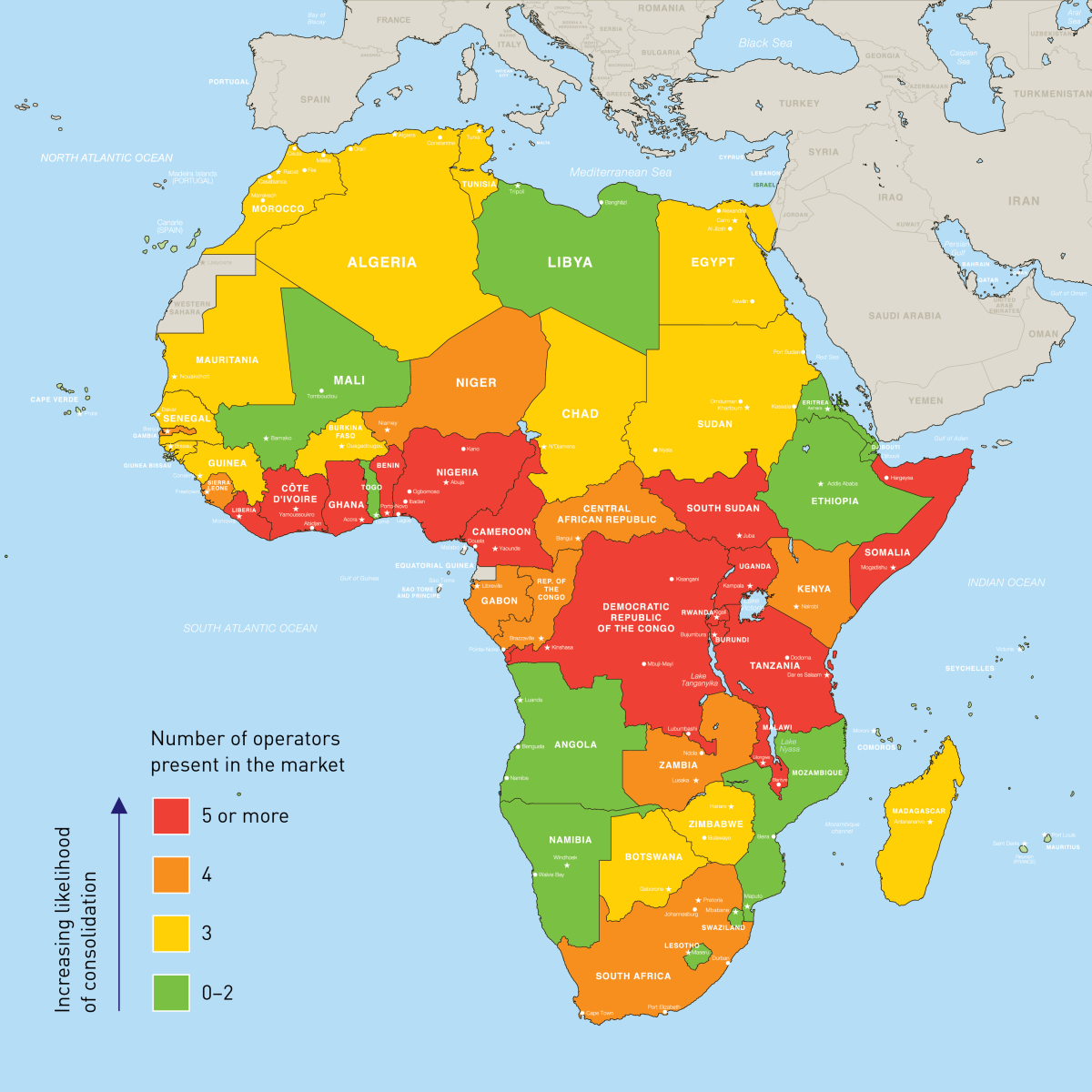 This glut in mobile networks helped to drive the African mobile industry to mass-market adoption. Low tariffs from many operators competing for customers enabled the industry to grow quickly, but the days of 'land grab' are now limited. Operators need to consider the next wave of investment – with slowing revenue, increasing costs and shareholders demanding returns, M&A is a likely option.

Mobile operator M&A has occurred in Europe – for example, T-Mobile and Orange merged their UK operations under the single 'EE' brand. In Africa, Bharti Airtel's takeover of Warid Telecom in Uganda is possibly the clearest message yet that M&A is a perfectly viable consolidation strategy, one clearly recognised by Charles Mbire, Chairman of MTN Uganda: "Uganda is a market for at best two companies ... I think there will be consolidation. The anarchy in the market has to stop. Out will come realism, real prices and then we can invest much more."1

However, M&A is extremely difficult. The model is not fully proven in the mobile telecoms market, where dual brand issues are strong enough to negate all operational benefits. M&A often happens too late, when both operators are in deep trouble and shareholders are forced to take radical action. Regulators are wary of allowing M&A activity because it can completely remove a competitor from the market – a competitor that helps keep prices low for consumers. Furthermore, it can create a spectrum 'giant', which also generates regulatory issues. The Uganda deal was quick to win approval from the national regulator, but many others may be more reluctant to see their hard-fought competitive market reduced to a duopoly through M&A. The industry needs another solution – and that is network sharing.

African operators are already passive network sharers. Tower deals in Africa are common: 20 deals have been completed throughout the continent. However, as passive network expansion slows and operators focus on network capacity, equipment refreshes and new technologies, the benefits of passive sharing become limited, which is where active sharing becomes necessary. Active network sharing is a much more complex topic than tower sharing. Active networks are vital to mobile operators and are the revenue-generating assets that define it as an operator. Sharing such assets with a competitor is still relatively uncommon and only a few CEOs/CTOs in Africa have first-hand experience.

Operators in Australia and Sweden were in the first wave of 3G network-sharing deals in the early days of 3G roll-out, partly because of the nature of their geographies – large, sparsely populated areas make the economics of active network sharing very attractive. Since then, more than 40 network-sharing deals have been announced in Europe alone.

What can Africa learn from this wealth of network-sharing experience?

Consolidation in Africa will happen – it is just a matter of timing. Proactive operators can drive that consolidation through M&A and network sharing, and by matching strategies with market position and regulatory approval. Sitting back and waiting for the returns to roll in is no longer an option. Only proactive business leaders will be winners in the now inevitable network consolidation across Africa.

Business survey: SMEs are increasing their security budgets, but they need more support from suppliers

The digital transformation of the towerco business is progressing