Hyperscale data centre markets are driven by a select group of high-value, data-hungry customers. In China, this pool of companies is widening, while capacity demand from established companies shows no signs of slowing. As data centre builds move to satellite cities, operators must fulfil crucial success factors to thrive.

Unicorns are emerging in China at a faster rate than anywhere else in the world. These start-up companies that are valued at over USD1 billion are distributed across the country – the Greater Beijing area accounts for the largest concentration, with over 50 of these companies headquartered in the region. Meanwhile, there is no shortage of unicorns in the other data centre hubs of Greater Shanghai and the Greater Bay Area. This provides opportunities for regional and national operators to capture capacity demand that tends to originate locally before expanding geographically.

Opportunities for hyperscale operators exist across the lifecycle of these businesses

As these unicorn start-ups become successful companies, capacity requirements evolve and increase. Throughout the lifecycle of these businesses, hyperscale data centre providers can benefit both directly and indirectly from this growth (see Figure 1). Early-stage ventures are unlikely to have cause or means for hyperscale colocation, but an estimated 85% of small and medium-sized enterprises (SMEs) in China go directly into the public cloud. In aggregate, this creates a long tail of cloud demand and drives notable hyperscale capacity demand from the cloud service providers. In the growth phase of these unicorns, capacity demands justify direct hyperscale colocation agreements and public cloud becomes less attractive as costs continue to scale with demand. Upon reaching sufficient scale, these unicorns are likely to commission built-to-suit (BTS) facilities or act as large anchor tenants in hyperscale facilities. The primary vendor from the growth phase stands to benefit greatly if it can defend its share-of-wallet (most customers will follow a multi-vendor approach to some extent). 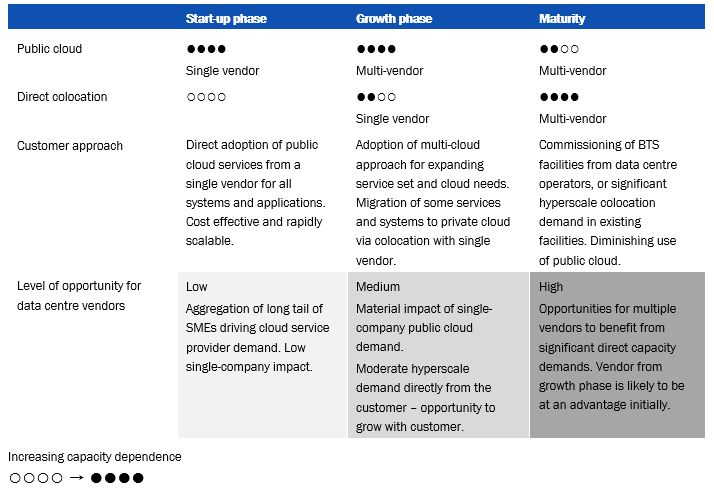 Data centre providers can grow alongside these emerging internet companies. Meanwhile, demand among the most established Chinese giants also continues to increase – Alibaba’s data centre demand has increased by an estimated 220MW since 2016. With several hyperscale BTS facilities currently under construction, this shows no sign of decelerating. Internet giants in China increasingly favour an outsourcing approach to data centre construction over self-building, as it allows them to focus on core business and to reduce time-to-market. Over time, these customers tend to favour a multi-vendor strategy, providing opportunities for new customer acquisition by DC vendors and increasing pressure on existing vendors to maintain share-of-wallet.

Scarcity of land and power consumption of data centre facilities has prompted Chinese authorities to limit further builds in Tier 1 cities, for example banning development and expansion of facilities in six districts in central Beijing. This regulation has encouraged growth of data centre clusters in satellite cities outside these Tier 1 cities. The internet giants are regularly commissioning BTS facilities in Zhangjiakou in Greater Beijing and Nantong in Greater Shanghai, among several other clusters.

A comprehensive assessment of market opportunities should consider the positioning of operators across these criteria.

Analysys Mason has conducted multiple due diligence exercises and market studies on data centres in China and Asia–Pacific for investors and has a strong understanding of the key drivers and challenges that need to be evaluated. For further information, please contact Hamish Peddie (Manager) at hamish.peddie@analysysmason.com or Lim Chuan Wei (Partner) at lim.chuan.wei@analysysmason.com.