Cloud service providers may prove to be the utilities of the future, in a market that remains highly competitive

According to the Oxford English Dictionary, a utility is “an organisation supplying the community with electricity, gas, water, or sewerage”. Regulators and policy-makers in several parts of the world have started to wonder whether large internet platform businesses, operated by the likes of Amazon, Facebook, Google and Microsoft, may be a new form of utilities. After all, they provide essential services to virtually everyone in many developed markets, and they are often portrayed as new monopolies. This analogy can appear somewhat facile, and more in-depth and thoughtful reviews (such as the Furman Review1) have sought to break down the comparison into objective features such as network effects, high upfront costs and barriers to entry and the importance of intermediating downstream relationships (for example, between individuals and/or firms).

The Furman Review uses a comparison with electricity suppliers to question if online platforms are utilities or not. Electricity is not only a fundamental part of everyday life for most people, but it is also an essential input into virtually every economic activity; it powers factories, farms and offices. Increasingly, a growing proportion of electricity usage comes from computers: a regularly updated paper suggests that ICT currently uses 8–10% of all electricity worldwide, and that this will grow to 20% by 2025.2 A third of this usage will be linked to data centres; the large internet companies are all committed to power efficiency and the large-scale use of renewable energy to power and cool their facilities.

A recent study by Analysys Mason shows that online content and service providers, and in particular, the major global internet companies, have invested around USD70 billion annually in their data centres since 2014. Google is one of the largest private sector investors in electricity generation outside of energy companies.3 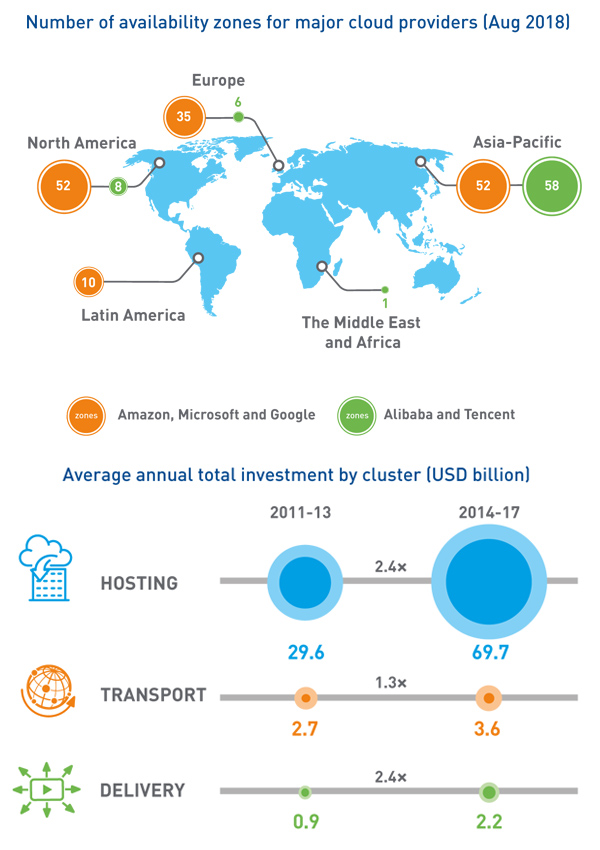 Data centre facilities are expensive; they are now typically designed to use tens, and sometimes hundreds, of megawatts. Data centres and the cloud systems that run on them are complex, fast-evolving and incredibly investment-intensive: AWS added USD8 billion in assets in 2018, representing around a quarter of its entire revenue. Thanks to these investments, every company in the world has access to computing power and infrastructure that is virtually identical to that that Amazon, Google and Microsoft use for their own services, thereby reducing the technical barriers to entry into many internet-related markets. Apple and Netflix are good examples of this: they are both major customers of AWS, but are also in direct competition with Amazon for video streaming and mobile and home devices.

Cloud providers are increasingly integrating many more-advanced services into their cloud offering, which allow their customers to use not only their IT infrastructure (hardware), but also voice and image recognition software (such as Amazon’s Rekognition or Google’s Vision AI) and pre-established machine learning algorithms (for example, Amazon’s SageMaker or Microsoft’s Azure Machine Learning). Voice interfaces are an interesting development: Amazon, Google, Microsoft and even Apple have all developed mass-market voice assistants, partly as an interface to their services, but also as a basic building block to add to their cloud offering to corporations in sectors where voice commands and voice recognition are, or will be, important.

This points to the idea that cloud service providers may be the real new ‘utility’, in the sense of an essential input into every aspect of everyday life. They harness a traditional commodity (electrical power) to deliver a new form of input (computing services), which is then delivered to any user worldwide in its raw form or combined with any number of structured services (such as voice recognition, AI-as-a-service and visualisation engines). Internet companies such as Amazon and Google have built huge businesses on platforms and intermediation, but are now growing quickly, partly by opening up the building blocks of their platform services to all.

These internet companies are investing large sums of money into building competing cloud infrastructure across the world. Unlike traditional utilities, these companies offer differentiation across multiple dimensions, and are not natural monopolies. This is partly possible because the internet remains an open, worldwide medium, and access networks tend to be operated and regulated effectively, unlike electricity, which relies on national, closed distribution networks.

Regulators and policy-makers will undoubtedly look into the competitiveness of cloud services soon enough. As they do so, they will need to adapt their analytical toolboxes to the new challenges of cloud services, which are infrastructure- and investment-heavy (similarly to power generation), yet fast-evolving and heavily reliant on software. Analysys Mason is already working with clients across the value chain to understand cloud services dynamics, and is ideally placed to advise on their implications for users, telecoms operators and policy-makers. For more information, please contact David Abecassis.