There are only 6 years left to achieve the European Commission’s 2025 target of making 1Gbps broadband available to the urban population of the EU,1 combined with nationwide 100Mbps access throughout the EU. Significant progress has been made in meeting the 100Mbps target: some combination of copper, coax, wireless and fibre technologies is available in most countries, with targeted interventions to address rural gaps. However, full-fibre networks are the best technical solution to achieving 1Gbps broadband in urban areas in the 2020s and 2030s.

GDP growth is the ultimate objective of policies for better broadband, but the frame of reference is constantly moving. The speed of broadband that is desired will continue to increase decade after decade. In a recent study,2 the average broadband speed in OECD countries was calculated to have increased by approximately an order of magnitude in the decade to 2016, reaching around 10Mbps. It is estimated that this speed increase has led to a GDP increase of around 0.1% per annum. With the expansion of fibre to the premise/building (FTTP/B) networks, further repeated order-of-magnitude increases in the average reference broadband speed may occur in the coming decades: from 10Mbps to 100Mbps by 2026 and from 100Mbps to 1000Mbps by 2036. To achieve these averages, peak speeds need to be another order of magnitude higher still.3

The European Commission’s 2025 target is not in isolation; most countries and regions in the world are striving to achieve similar goals. As such, if the relationship between economic growth and broadband speeds were to be maintained then if one country fell behind the others in terms of the fastest (or average) available broadband speed, they would risk falling behind in economic growth as well, and could lose up to 1% GDP per decade if the broadband speed did not improve at all.

New networks require substantial investment. Measures can be put in place to reduce the cost of deployment (such as better access to ducts and poles and the introduction of new rules to assist with rapid deployment), but they are dependent on the nature of the existing infrastructure and the effectiveness of regulation. These measures can moderate some of the anticipated costs of deployment, but they will not remove the risks associated with take-up and revenue that are inherent in the forecast business plans.

There is some evidence (for example, from Spain) that a bilateral agreement can be an effective way for two operators to gain market share on a full-fibre to the home network deployment, while only building or funding half of it. At the same time, some of the over-build threat is also removed, although there can be competition concerns for small unrepresented operators. The effect of operators collaborating to deploy fibre, by whatever means, can be captured numerically through a higher implied Herfindahl-Hirschman Index (HHI) for the broadband market.

Two recent papers have found that there is a complex relationship between market concentration and investment. In these papers, the authors have linked a low HHI (signifying the presence of more, established competitors and therefore less concentration in the market) with smaller investments in broadband, historically.2,4 This might be because the increased competition realises consumer surplus and relies upon wholesale access to an existing network, and both investments in the downstream ISP and retail activities are relatively limited. Countries with a higher HHI have more broadband investment, but only up to a point; if the market is too concentrated (monopolised) then the competition-driven incentives to invest are reduced. These papers therefore support the idea that having a mid-range HHI is attractive: the market is not too concentrated or too competitive.

The revenue generated by faster broadband services must come from end users. If consumers pay low prices for their current broadband services, then the business case for investing in fibre is weakened, because relying on consumers’ willingness to pay higher prices is risky. Government subsidies for broadband roll-outs are helpful, but are typically focused on improving access in the (most) rural areas, rather than improving the business case in urban areas.

Analysys Mason data on broadband spend and FTTP/B take-up since 2010 indicate that the full-fibre take-up in Western European countries with a relatively high spend on broadband services has increased significantly. Conversely, in most of the countries where the average broadband spend is below the Western European average,5 FTTP/B has yet to emerge for the mass market.6 Other historical data have been used by Koutroumpis to estimate that broadband prices that are 10% higher are linked with broadband investments that are 3.7% higher.2 There are also two countries (Belgium and Ireland) where the spend on broadband appears to be relatively high, but, by 2017, there was no major increase in FTTP/B take-up. 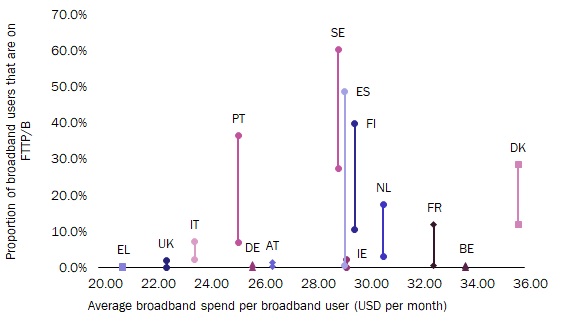 (De)regulation and relaxation of competition/merger rules may support higher prices and reduce the intensity of price competition, but can this revenue be used to benefit fibre network investment?

Evidence suggests that a higher spend on broadband services has, in the majority of Western European cases, been accompanied by greater fibre access network deployments, as well as a significant take-up of fibre broadband services. The need to develop a policy to enable full FTTP/B deployment is understandable, but the challenge is to identify which aspects of the sector framework need to be adjusted and how. The regulatory challenge, as always, is working out the right balance between competitive tension, conventional market/service regulation and, as this article suggests, finding ways to reach (higher) price levels that will support the investment in fibre. The complexity of this regulatory challenge for a country wanting to kick-start major FTTP/B investments is clear; Ofcom’s recent strategic policy position which contains seven different areas of focus illustrates this.7 The commercial challenge is how to identify and increase consumer spending, while diverting it from legacy fixed line and current broadband services to new services on recently deployed gigabit-capable infrastructure.

The fall-back position of major state intervention is governed by state-aid rules and various related obligations (for example, open access). This makes constructing the business case more involved, and correct procurement is a major government exercise. In any case, the intervention route is only about ‘gap-filling’; commercial deployments will need to meet most of the European Commission’s target using consumer revenue. Therefore, operators, investors and regulators need to get the price/choice balance right.

This is an area where Analysys Mason has significant expertise. Please contact Ian Streule, Partner, Consulting, for further information.

1 Around 75% of the EU population is urban, according to measurements from national statistics offices. According to Eurostat, 45–80% of the EU population is urban depending on whether the ‘intermediate’ regions are included.
2 Koutroumpis, P., 2018, The economic impact of broadband: evidence from OECD countries, https://www.ofcom.org.uk/__data/assets/pdf_file/0025/113299/economic-broadband-oecd-countries.pdf
3 Note that retail mass-market 10Gbps services are already available in Singapore, which shows what an unbundled fibre network can deliver.
4 Fourie, H., de Bijl, P.W.J., 2018, Race to the top: Does competition in the DSL market matter for fibre penetration? https://doi.org/10.1016/j.telpol.2017.11.003
5 Broadband spend is not the whole picture, as broadband users also pay for monthly line rental (and in some cases, an active but unused voice line).
6 As the exception, Portugal’s high number of multi-dwelling units increases the number of users who can access FTTP/B.
7 Ofcom, 2018. Regulatory certainty to support investment in full-fibre broadband, https://www.ofcom.org.uk/__data/assets/pdf_file/0025/116539/investment-full-fibre-broadband.pdf