Disentangling unbundling: the impact of local-loop unbundling on broadband take-up and quality

In a recent draft paper, three academics (Nardotto, Valletti and Verboven) look at broadband penetration and service speed statistics using very granular geographical data for the UK from 2005 to 2009 and draw a number of conclusions.1

That LLU-based offer higher service speeds than BT is not a surprise, for two reasons.

Figure 1 is from a 2010 report by Analysys Mason.2 It shows the evolution in the price paid for the cheapest option surveyed for a given speed, over time. The data is taken from the historic time series of the Analysys Mason Research product Triple-play pricing study – the hard-to-believe GBP300 per month for 8Mbps in 2004 is a business-focused offer. 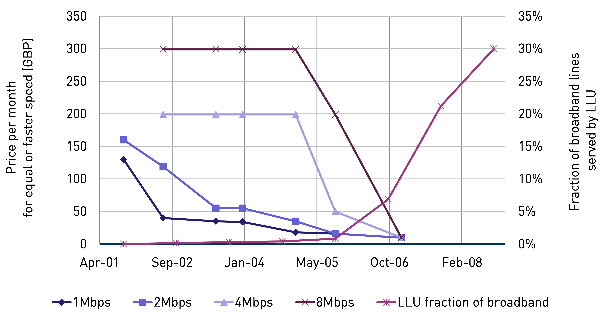 Even about 5% penetration of unbundling increased the headline speed achieved for most rational new customers (that is, those buying the best-value offer) from 512kbps or 1Mbps (depending what the low-end offer was in the country of interest – the UK is illustrated) to (pretty much) the maximum available using the DSL technology available. So if your provider is using ADSL2+, you will get the benefit.

That infrastructure-based competition (that is, cable availability) does increase broadband penetration is interesting but possibly not unexpected, because UK cable covers urban and suburban areas (that is, from a policy perspective, it is likely that there is a slightly larger job to do in demand stimulation in more rural areas).

International comparisons support the conclusion that LLU appears not to affect ultimate broadband penetration: countries where LLU has been more successful do not necessarily have higher broadband penetration (indeed, the example of Greece shows that LLU-based services can be a significant fraction of the take-up in countries with low penetration). Looking forward, this is not necessarily a bad thing: while the positive effects of cable competition are still highly relevant to NGA policy, it is very unlikely that the same (unbundling) policy actions that were very successful in increasing the speed (that is, quality) of first-generation broadband will work in obtaining the high network coverage and very high take-up levels required by the Digital Agenda for Europe. Because of the inferior scale economies for alternative operators of cabinet-based FTTC solutions (for example, see our 2007 paper, The business case for sub-loop unbundling in the Netherlands3), a better bitstream product is likely to be the key to obtaining vibrant service competition in many EU countries.

1 Unbundling the incumbent: Evidence from UK broadband. Available at www.econ.kuleuven.be/public/ndbad83/Frank/Papers/LLU%20first%20draft.pdf.