Fibre deployment: the planets are aligned for significant network investment

There has been an impressive number of investments in and carve-outs of fibre networks in the last few months, including those in France (including SFR, Bouygues Telecom and public initiative networks), Italy (Metroweb/Open Fibre, KPNQwest, MC-Link and Infracom), the Nordic countries (Nianet, Tampnet and TDC), Portugal (DST), Spain and Latin America (including Adamo and Ufinet) and the UK (Cityfibre, euNetwork, GigaClear, GTT and Interoute).

Competition between potential investors is expected to be fierce given the future deals that have already been identified, as well as those deals that are currently ongoing (for example, those in Austria, France, Israel, Germany, the Netherlands, Portugal and the UK). However, the rationale behind investors’ increased appetite for fibre assets, and, more importantly, the justification of the significant valuations (high EBITDA multiples) that have been reached in recent transactions raises questions.

A number of interrelated and mutually reinforcing factors can be analysed to provide an explanation. These are presented in Figure 1 and are discussed below. 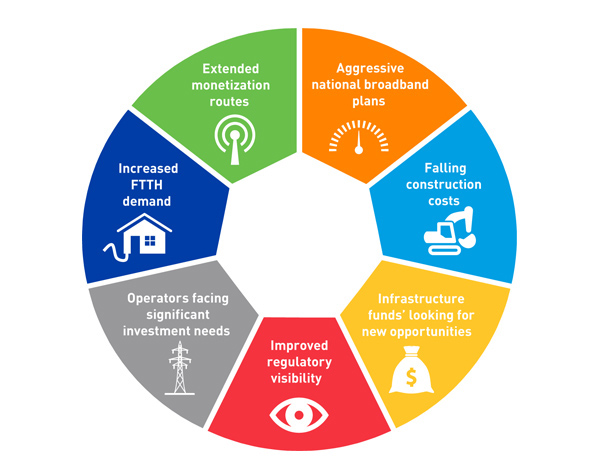 A few years ago, FTTH was seen as a complement to traditional broadband technologies (copper pair or cable technologies) that would only be deployed in very specific areas. However, numerous governments are now pushing for significantly more-aggressive, near-national fibre coverage. France was one of the first developed countries to opt for (close to) national fibre coverage a few years ago (hence the significant number of recent fibre investment projects). The UK and now Germany (among others) are pushing for extended fibre coverage, following the realisation of the need for and the interest in fibre-based broadband connections for all citizens. National schemes have been devised (some with intervention subsidies (that is, compatible state aid)), and large operators have been put under political pressure to achieve such extended coverage.

Construction costs for fibre network deployments have decreased significantly due to ‘learning by doing’ as well as economies of scale and a more-efficient reuse of existing infrastructure (typically ducts and poles). The benchmark deployment cost in low-density areas was estimated to exceed EUR1000 per home passed (HP) a few years ago, but benchmarks now typically range between EUR450 and EUR900 per HP, even in remote areas. OpenFiber (in Italy) and MEO (in Portugal) even report costs as low as EUR250–300 per HP (thanks to the reuse of existing infrastructure). This makes extended coverage viable and boosts return on investment.

Infrastructure funds (or arms of insurance companies) and pension funds have money to invest. Fibre projects are attracting more bidders from a utility background (for example, those that have previously invested in motorways or power) and are looking for mid- to long-term, quasi-monopolistic investment opportunities on which they can accept lower rates of return than more-mainstream private equity funds are able to. The demand for fibre investment opportunities has increased, but the supply of such opportunities remains limited, thereby creating a competitive environment for potential bidders.

The new European Electronic Communication Code (EECC) (that came into force on 20 December 2018) provides greater visibility regarding co-investment and some form of remedy exemption for wholesale-only network operators (article 80 of the EECC). In addition to this, numerous countries now have a clearer and more-stable regulatory framework regarding the treatment of fibre. This typically provides enhanced visibility of the potential risks of fibre regulation for and network overbuild. For example, in July 2018, the French regulator ARCEP published a recommendation on the consistency of FTTH network roll-outs, which creates strong operational and legal disincentives for network overbuild, pre-emption and skimming. This implies that in France, fibre network deployments in sparsely populated areas are de facto quasi-monopolistic. In the UK, Ofcom published a new regulatory approach to “supporting investment in full-fibre (that is, FTTH) broadband”. Increased visibility reduces investment risks and therefore facilitates external financing.

Telecoms markets are increasingly characterised by converged networks and services (typically fixed, mobile and content services). As a result, telecoms operators must make significant investments to support both their fixed (FTTH) and mobile (5G) capabilities. For this reason, they welcome co-investors (perhaps even more than before) that are willing to finance the provision of next-generation infrastructure.

FTTH take-up is improving steadily (where available). There are a few examples of take-up reaching over 30% of homes passed only 1 year after network deployment. In the longer term, it is likely that copper networks will be decommissioned in locations where fibre is available. This reinforces the appetite for fibre investment.

There are several services that require dedicated high-bandwidth links, in addition to retail broadband connections for consumers and businesses. These include data centres, mobile base stations and small cells, and the deployment of smart city services. These opportunities increase both the number of prospective customers of fibre networks and the revenue that can be generated from fibre roll-outs, and therefore increase the value of fibre assets.

Analysys Mason is the commercial and technical advisor of choice for TMT transactions thanks to its exclusive TMT focus and the experience gained in over 300 transaction support assignments over the last 5 years. In particular, over the last 2 years, we have been involved in more than 60 fibre transactions (on both the buying and selling side) including the most-sizeable deals in Europe (Austria, the Balkans, France, Italy, the Netherlands, the Nordic countries, Poland, Spain and the UK) as well as those in Asia and Africa.

The NAO market grew strongly in 2021, despite a change in the market leaders