"In our significant experience, the most robust valuations take a holistic view, incorporating lessons learned from regulators, as well as spectrum, commercial, technical and financial domains."

Following years of challenging market conditions and regulatory headwinds, investors are now able to press ahead with in-country consolidation of mobile operators in Europe. In this article, we use recent examples of mobile M&A deals to consider the main factors that drive valuation, as well as some of the associated challenges and risks when valuing mobile businesses prior to a merger.

Mobile M&A in Western Europe is progressing against a backdrop of declining EBTIDA and cash flow, as well as increasing capex

In Western Europe, mobile operators’ revenue has declined by 2.5% per year since 2010, which has resulted in a 6 percentage point drop in EBTIDA margin (see Figure 1). Intense competition for customers, as well as limited differentiation, has sparked price wars, contributing to this decline. Regulatory headwinds through reduction of mobile termination rates (88% reduction over 5 years in the UK) have added further to these declines. In addition, cash generation has been impacted by 4G network deployment, with the proportion of capex to sales across the region rising from 11.1% in 2010 to 20.0% in 2014. Against this backdrop, investors have initiated industry consolidation. Recent deals in Austria, Ireland and the UK have opened the floodgates, and M&A processes are being considered by investors in other major European markets. 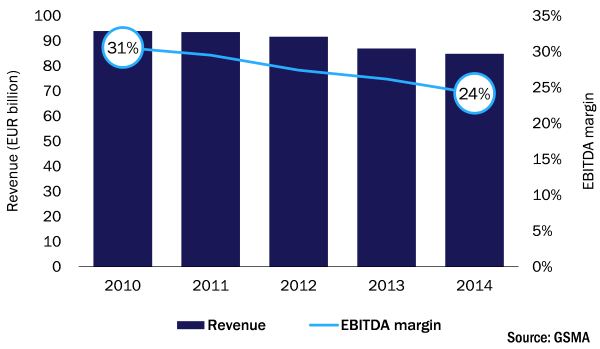 Analysis of two recent deals highlights a significant difference in valuation and, consequently, different levels of synergies. For example, in France, Bouygues Telecom generated EUR0.7 billion of EBITDA in FY2014, but Altice’s proposed offer of EUR10 billion implies an EBITDA multiple of 14. However, in the UK, Hutchison’s proposed takeover of Telefónica UK (O2) for GBP10.25 billion (EUR13.87 billion) gives a multiple of 7.5 on the EUR1.7 billion OIBDA it generated in FY2014 (Telefónica reports OIBDA instead of EBTIDA).

Based on our recent experience of working on some of the largest M&A deals in Europe, we help to explain this range in multiples by analysing the drivers of valuation in more detail.

Mobile operators are considered to be a fixed-cost business, with geographical coverage needs driving network costs. Therefore, significant cost synergies are calculated as an intrinsic part of the merger process through network consolidation – even to the extreme of assuming that one network could be switched off. However, network integration is a complex process: it takes about a year of planning before work on the networks begins, and another year before sites can be removed – and savings realised. If, during the initial planning stages, traffic overtakes forecasts and the network needs to be densified, consolidation must be scaled back and, therefore, the business is unable to achieve the planned synergies.

In order to ensure that any planned consolidation is not scaled back, valuation must be based on detailed forecasts of the traffic and loading on each network – both on a shared and standalone basis. Forecasting should be done on a site-by-site basis, which enables synergies from consolidation to be accurately modelled and allows more realistic merger targets to be set.

Spectrum is another synergy area. Mobile business plans do not always take into account the cost of new spectrum, even though spectrum releases are well-publicised. Spectrum valuation is complex because small changes in assumptions can drive wide variations in value. Therefore, benchmarks (such as MHz per population) should be treated with caution. For example, in a recent spectrum auction in Germany, three operators’ bids pushed prices beyond EUR5 billion, which demonstrates that auction design and bidder dynamics are more important than the number of bidders.

If the number of operators in a market decreases, this can theoretically reduce competition, which is why regulators and competition authorities carefully review any proposed merger. For valuation purposes, it is challenging to demonstrate a causal link between reduced competition and increased pricing. In addition, competition can take many different forms. For example, network densification can offer benefits including the ability to deliver greater speeds and capacity at marginal cost Therefore, the merged entity may not increase prices, but instead increase bundle size, which puts pressure on other players’ margins. Once larger bundles are out in the market, it is very difficult to retract them.

The performance of LTE versus Wi-Fi networks is also a key consideration for valuation. Although it is still too soon to see in the data, larger bundles on better-performing LTE networks may change consumer behaviour by reducing the desire to log in to the nearest (congested) Wi-Fi hotspot. About 70% of UK data is currently offloaded, and small changes in consumer behaviour can have a dramatic impact on network loading and, thus, valuation.

Valuation needs to take into account likely remedies which are required from regulators and competition authorities. For example, the Irish merger between Hutchison 3G Ireland (H3Gi) and Telefónica Ireland resulted in the merged entity having to provide capacity on a ‘quasi-spectrum’ basis to mobile virtual network operators (MVNOs). This type of remedy has the potential to create a new type of competitor that is able to provide aggressive pricing because the cost base is more aligned to existing mobile network operators (MNOs), whilst requiring lower capital investment.

Benchmarks from prior mergers demonstrate that when two mobile operators are merged, their combined market share of subscribers typically reduces over a period of 2–4 years. In addition, between 3 and 10 percentage points of share can be observed before stabilisation occurs. This phenomenon reduces value, and, therefore, the integration and brand plan needs to be thought through clearly before their impact on valuation can be calculated. When T-Mobile and Orange merged in the UK, the resulting operator created a new brand ‘Everything Everywhere’, which was shortened to a more manageable ‘EE’. While some questioned the wisdom of a new brand, it appears to have been successful because EE is now synonymous with 4G, and enjoys a market-leading 14 million 4G subscribers.

To be considered robust, valuations must take a holistic view of all assumptions and market variables

EBTIDA multiples are a poor comparator for M&A valuation purposes because so many different assumptions and variables form part of the calculation. In our significant experience, the most robust valuations take a holistic view, incorporating lessons learned from regulators, as well as spectrum, commercial, technical and financial domains, before numbers are committed to stakeholders. As a TMT specialist advisory firm, the experience that we have gained from working with operators in technical, commercial and regulatory domains enables us to provide a holistic valuation perspective that would typically require multiple advisors for each domain.

Analysys Mason has extensive experience working on some of the largest M&A deals in Europe and can support investors and mobile operators with all aspects of valuation for M&A.