"Analysys Mason suggests that investors and operators look at the key learnings from the Polkomtel Infrastruktura/Cellnex transaction and adjust their strategies to maximise the benefits of the emerging model of the mobile NetCo."

Neutral hosting of mobile network services has been a topic of discussion within the mobile industry for years, but examples of its successful implementation are limited. Mobile network operators (MNOs) have been reluctant to even consider outsourcing their networks, widely regarded as a core asset, while the industry has lacked a framework for such an arrangement. However, this has started to change.

The deal that conditionally closed at the end of February 2021 between Polkomtel Infrastruktura (Poland) and Cellnex (Spain) marks the first large-scale disinvestment of an MNO’s network to a third-party service provider. Under the conditions of the deal, Cellnex agreed to pay EUR1.6 billion (USD1.9 billion) to buy all the components of the former’s network under a long-term network-as-a-service agreement, with a mandate to commercialise that network to interested third parties. The agreement also marks the first such venture of a strategic mobile infrastructure investor becoming a full network-as-a-service provider.

The deal involves the transfer of all passive, active (RAN network) and backhaul assets to a new company, which is referred to as the mobile NetCo (see Figure 1). In this model, MNOs retain ownership of spectrum and core network while all remaining elements of the access network (including towers, active equipment and backhaul) are provided by the mobile NetCo.

Figure 1: Ownership of assets under the mobile NetCo model 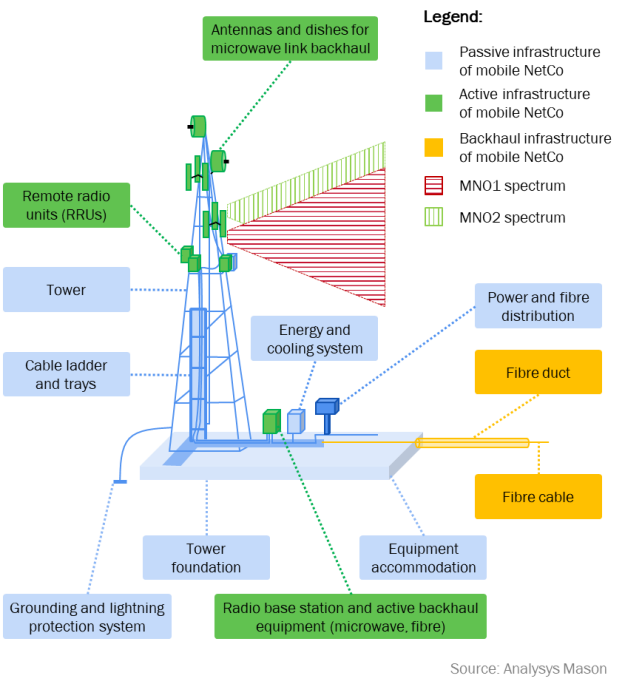 With the asset ownership perimeter defined, the natural next question revolves around the definition of the business model, including the service, pricing and value creation mechanisms employed.

Historically, towerco services have been based on a passive access1 model that often centres around a standard configuration allowance, with surcharges applying in case of extra space requirements. The new mobile NetCo model could allow operators to buy services for individual locations, or even their entire network, based on a modular service catalogue. Passive access could be considered as the standard product while active services and/or backhaul could be added on top.

Pricing mechanisms for passive access (with a standard configuration allowance) and backhaul services (with bandwidth capacity) have been well established in the industry while active services are much newer. Their design needs to handle dynamism and must also accommodate operators’ demands for changing network configurations (such as bands and technologies deployed on each site) on a continuous basis. In parallel, active service designs need to capture the complexity of associated costs, as each configuration may involve differences in investment levels, running costs (for example, electricity) and maintenance requirements (including regularly refreshing equipment with a short lifespan).

The introduction of a ‘per carrier pricing’ model can allow NetCos to manage this complexity while maintaining a price catalogue that is concise and meaningful. In this model, tenants pay for the number of carriers used on each site based on their types. For example, carrier types can be categorised based on technology status (new technology versus existing technology) and frequency status (new frequency versus existing frequency) as illustrated in Figure 2 below, with pricing adjusted to reflect different investment and running cost levels. 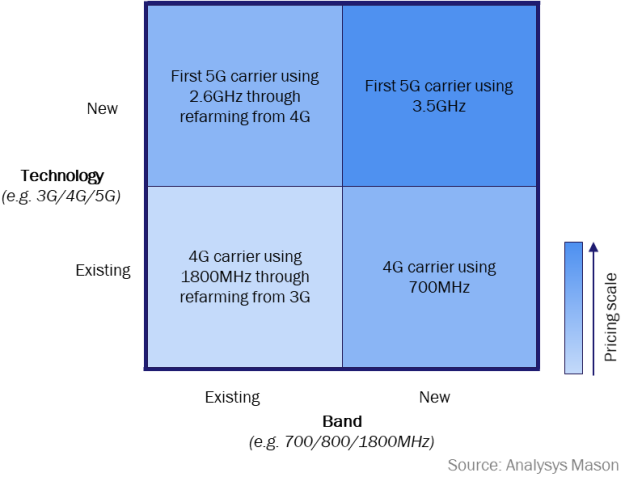 Transparency when setting baseline pricing is considered to be essential in such critical relationships. A cost-plus recovery model can be considered, where opex is treated as a pass through and capex costs are recovered with a margin to account for the cost of the investor’s capital. Once the mobile NetCo and its client have agreed on the choice of permitted equipment vendors, pricing can be set on a transparent basis using a total cost of ownership (TCO) model.

The mobile NetCo model enjoys similar value creation potential to the traditional passive co-location model. Operators in the same market often tend to share similar holdings across bands and follow similar spectrum strategies (for example, 3.5GHz as the 5G capacity band, 800MHz as the 4G coverage band). Mobile NetCos have the potential to reuse existing equipment to deploy the spectrum of multiple MNOs and create economies of scope (see Figure 3).

The created value can be distributed among the involved parties through margin premiums for the mobile NetCo or discounts flowing to both tenants. 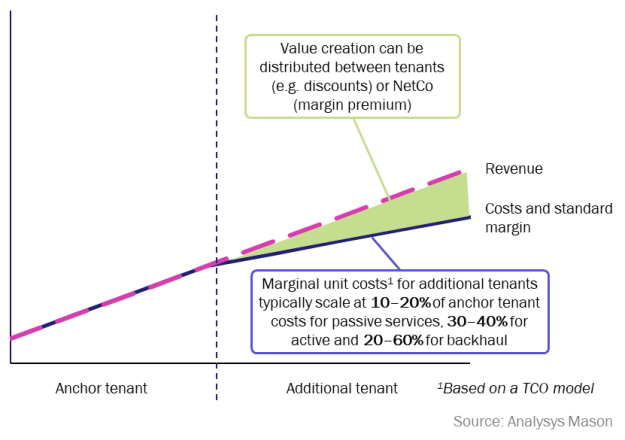 Active services present towercos with an opportunity to significantly expand their existing revenue base (for example, by up to 2x) by upselling to existing tenants, by attracting tenancies from operators wishing to expand their coverage, by addressing national initiatives for neutral host networks or by becoming network partners to aspiring new entrants. Active services can also present attractive EBITDA margins for anchor tenants (>60%) and sharing synergies (as shown in Figure 3) that can be attractive for investors.

For established MNOs, the mobile NetCo model can present an opportunity to raise cash by commercialising their existing active equipment estate, as well as to facilitate 5G roll-out or easily expand coverage in underserved areas. For prospective new entrants, this model removes significant barriers to entry such as large peak funding requirements and speed of network deployment.

Industry stakeholders will need to keep developing frameworks to solve the challenges of the mobile NetCo model. Key issues include practical matters (such as the culture within MNOs’ organisations, network integration of neighbouring points of presence when managed together by both an MNO and a mobile NetCo), contractual matters (including the selection of acceptable equipment vendors) and competition (including managing commercially sensitive information across tenants). However, the industry is making positive steps in addressing these issues and more ventures of a similar nature are expected in future.

Analysys Mason provided business planning and sell-side support to Polkomtel Infrastruktura as part of the recent process. Analysys Mason has a strong track record working alongside strategic and financial investors in the mobile infrastructure space and has completed over 100 tower-industry-related assignments in the last 5 years.2

1 Includes provision of access to the passive network elements as shown in Figure 1, and most notably, space on tower to mount equipment.

2 For further details of our work, please see Analysys Mason’s Strategy and planning.