"Network sharing is a well-established measure for mobile operators to reduce network-related costs relative to a standalone network. However, network sharing offers the potential for harm as well as good."

An Icelandic operator recently asked Analysys Mason to assess a proposal by two other Icelandic operators to pool their spectrum allocations and share their radio network. The proposed spectrum pooling would add up to more than half of the total mobile spectrum available in the market and give the pooled operator 78% more FDD spectrum than its largest competitor.

Network sharing offers the potential for harm as well as good

Network sharing is a well-established measure for mobile operators to reduce network-related costs relative to a standalone network. Conceptually, a range of network elements can be shared (as illustrated in the figure below). There can be positive effects from sharing: the greater scale leads to lower unit costs, enabling the combined player to compete more vigorously for end customers, for example by offering lower prices or greater network coverage. But there is also the potential for dampening of competitive intensity. This is a typical concern of competition authorities in merger control. 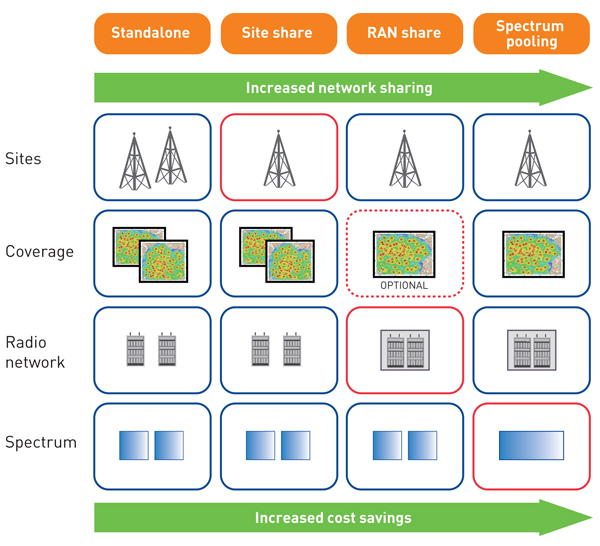 Site sharing and radio access network (RAN) sharing (often in specific geographies) are both relatively common and have been allowed in a number of countries, subject to certain safeguards.

By contrast, spectrum pooling takes RAN sharing a step further, in that it requires and builds on the shared RAN electronics to give each operator’s customers access to the combined bandwidth of their spectrum allocations, enabling the operators to offer a higher peak speed compared to that possible on a standalone network.

The deepest sharing is of the most concern

As a rule, the more network elements that are shared between parties, the less independent control they have over differentiating network parameters (speed, quality and coverage). For example, the French competition authority recently concluded1  that in densely populated areas:

“Frequency sharing which eliminates partners’ ability to differentiate would undermine the principle of network infrastructure competition and causes the Autorité to have strong reservations.”

Further reasons for regulators and competition authorities to think carefully before permitting spectrum pooling include:

Other countries have allowed spectrum pooling in some circumstances

Other than the Icelandic proposal, there are cases of spectrum pooling or proposals to allow it in four EU countries (Finland, France, Poland and Sweden). As one might expect from the above discussion on the potential impact that such deep sharing of infrastructure could have on competition, regulators in these countries have often sought to impose conditions that structure this pooling such that the benefits can be gained without an adverse impact on competition. Such conditions include:

As it stands, none of these safeguards have been proposed in Iceland, and so the proposed pooling is more likely to have negative effects on competition.

More widely, the cost savings enabled by RAN sharing and the speed benefits arising from spectrum pooling will be good to have – especially for rural customers – if a way can be found to enable competition to continue to thrive.

Analysys Mason has considerable experience of advising clients on different forms of mobile network sharing and the complex balances of interests to be struck in ex-ante and ex-post regulatory matters. For further details please contact James Allen or Janette Stewart.