"The submarine cable industry has changed structurally and international bandwidth use continues to soar."

After nearly a decade of limited investment in submarine cables, the last few years have seen a marked increase in the number of new cables all over the world. Over 50 new systems have been completed or are under construction, and another 35 systems are planned for completion before 2022. In parallel, the submarine cable industry has changed structurally and international bandwidth use continues to soar. This article considers the impact of these changes on global submarine cable developments and investment over the next 5 to 10 years.

Changes in the submarine cable industry over the last 10 years

Global international bandwidth grew by over 40% per annum from 2012 to 2016, according to TeleGeography. Traditional industry players, including wholesale Internet and voice operators, have experienced an impressive growth in traffic, but it is the entrance of the content and cloud providers that has had the biggest impact on the industry. Companies such as Amazon, Apple, Facebook, Google and Microsoft are responsible for approximately 70% of this growth, according to Cisco, and it is these companies who are influencing much of the investment in new cables.

These content and cloud providers use the international cable infrastructure to distribute their content via servers located in data centres closer to the consumers of the content, thereby enhancing the experience of the Internet user.

The networks interconnecting data centres are private content distribution networks (CDNs); private (and to an extent) open CDNs have been a driver of structural change in the industry over the last 10 years. The data centres that form part of the CDNs are globally distributed (see Figure 1 below). 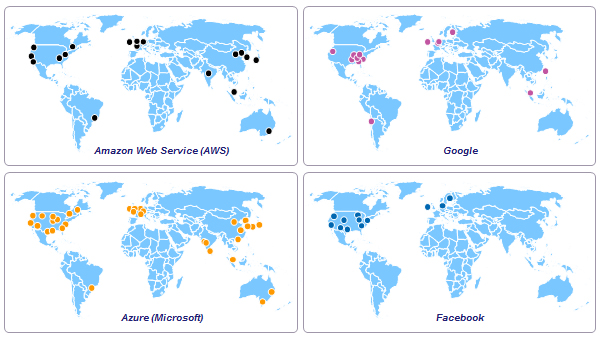 The requirement to interconnect these data centres means that content and cloud providers are:

The availability requirements of the content providers, cloud providers and traditional industry players in general have led to expanding requirements for diversity and redundancy, which have been a driver for some of the new investment. The impact of outages on businesses, and the practical constraints on rapid repair mean that alternative routes to interconnect the same locations are required, which in turn has led to alternative cables being laid.

The presence of terrestrial diverse dark fibre from the landing point inland to data centres or Internet exchanges is another requirement that is partially driven by content and cloud providers taking full dark-fibre pairs on the submarine cables.

The requirements of content and cloud providers will continue to shape the industry over the coming years, particularly in larger trans-ocean projects. As illustrated in Figure 1, the global data centre footprints are extensive, though large parts of the world are not yet served by these CDNs. As the local geographical market evolves, content providers may require further connectivity. Africa, for example, is largely underserved by global CDNs, and as Internet penetration and traffic per user increase, the CDNs will need to expand.

Commentators have highlighted the possible vulnerability of cable networks to sabotage with a consequent impact on national economies in recent months. These security concerns could result in an increase in government funding or other support for further diversity.

There are over 35 announced plans for the completion of cable systems in the public domain, and others are in the pipeline (even if some will be cancelled or delayed). Investment will be used in a variety of schemes, including the following.

Analysys Mason has extensive experience advising investors, governments and public bodies on the commercial and technical aspects of submarine cables, data centres and the Internet generally. For more information about our services, please contact Patrick Kidney, Partner, Consulting, at patrick.kidney@analysysmason.com.

The 5G network: an experiment with a USD300 billion prize